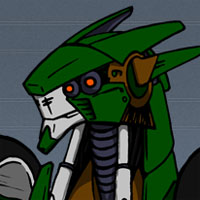 Flashover was forged on Cybertron before the great War. His original function was a Justice Investigator for Iacon Security. Disillusioned with the Senate and their corruption, he was easily swayed by the radical views of Megatron, a gladiator from the Game Pits, and became a Decepticon. His investigative skills allowed him to excel as an infiltrator and saboteur under the tutorage of Soundwave. But soon he discovered that what Megatron wanted wasn't the freedom he promised, but tyranny and domination. During a mission to infiltrate an Autobot base, he took the opportunity to defect and helped the Autobots in their fight against Megatron.

Flashover's vehicle mode is a motorcycle. He still retains many of the upgrades he received as a Decepticon, including four optics, a concealed pair of limbs for dexterous work, and a four-legged mobility mode. Favourite weapons are sniper rifle, EMP guantlet and energon swords.