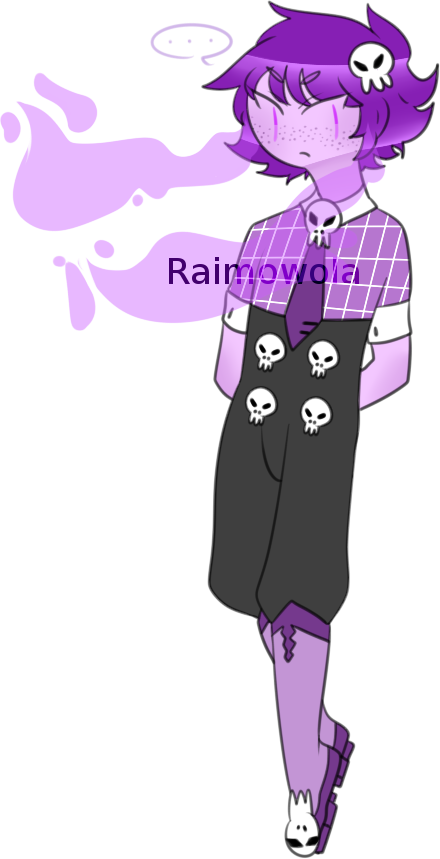 ☁ Body Build:
Obviously, he is really short and small. His body isnt so strong or muscle up looking. In fact his body is normal looking, more average. He isnt really much skinnier as you expect, he is just natural half skinny and chub~ So average body, however he is VERY weak. He isnt strong, he is too weak to go against anyone physically.

☁ Personality:
He isnt mean or anything as you expect because he is grim reaper or his look. His look is suppose to look bit evil and scary eyes, but he is just born to have that because of his father. So people are usually scared of him because of his face. He is nice, but usually pokerface and talk big words, always workholic over his studies. He is quite strict on teaching and learning and etc. His students always tease him for being so shirt, so when he is extreme angry or furious, his face will turn into a creepy skull face than another skulls you see. There are really rare time when he smile or laugh, if he did laugh or smile gently, no doubts there can be people fall for his looks~ He can be very dense and clueless about people's feelings, but he wouldnt mean to do it on purpose to blow it off. He will treasure them if you talk to him face to face.

☁ Orientation: He is gay

☁ Dislikes:
✘ People skipping school
✘ His overprotective parents
✘ His height (he gets teased for being called as "midget")
✘ Being call cute
✘ Not able to study
✘ Being force to have fun (well he never experience to have fun so he thinks fun is not "fun")

☁ Additional Information:
• He is a professor at college! He works at 5 college of being dark magic professor. But he is good at LOTS of subjects, expect PE(Gym).