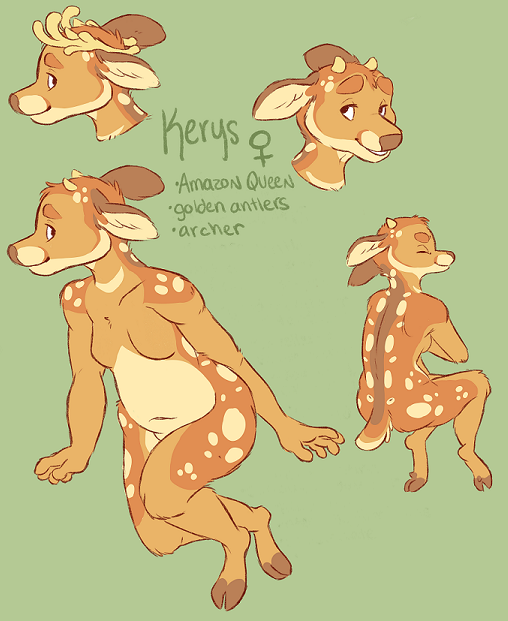 Her name is Kerys (CARE-iss), which comes from the mythological story of the Ceryneian Hind (a hind is a female deer). You can read about it on the wiki article here if you're interested, but basically it was an enormous deer with golden antlers (even though it was female) and bronze hooves that belonged to Artemis, that Hercules was ordered to hunt down as one of his trials. It lived in Keryneia, Greece, which is why it's called the Ceryneian Hind, and why I named her Kerys. Kerys also has tiny golden horns because of this tale, and wears an antler crown made of gold.

Kerys is an Amazon queen and an archer. Most Amazons attack from the trees, and Kerys is definitely no exception. She remains hidden for as long as possible until she's certain of whatever moves she must make, whether offensive or defensive. Her battle style is one of calculation and precision, which is why she's best suited as an archer. This also makes her a fitting ruler for her tribe, as she carefully weighs difficult decisions very quickly.

Personality-wise, Kerys is outwardly friendly with strangers, but very cautious and wary of them. She considers negative consequences as readily as positive, and is sometimes overprotective of her tribe and herself, including her own feelings or heart. She appears very gentle and is kind to those she thinks are deserving of kindness - which is most people - but she can be fierce when necessary. She strives to uphold her dignity and self-respect as much as she does the respect of others, and doesn't like to fight or rock the boat over small problems or misunderstandings. Kerys is warm and inviting, loves ceremony and celebration, and loves to spend time with visitors as much as she does her tribe. She's happiest with her tribe, and is known for her laugh and the way she playfully teases those close to her. She enjoys telling stories, teaching others, traveling and exploring, looking at stars/constellations, bonfires, and is self-described as indulgent. Blackberries are her favourite food, and she loves warm baths (when she can get them). Although she isn't shy normally, and although it's an Amazon tradition, the one thing Kerys finds difficult to do around others is dancing, and she does it very rarely (though enjoys it very much when she has the courage to)!