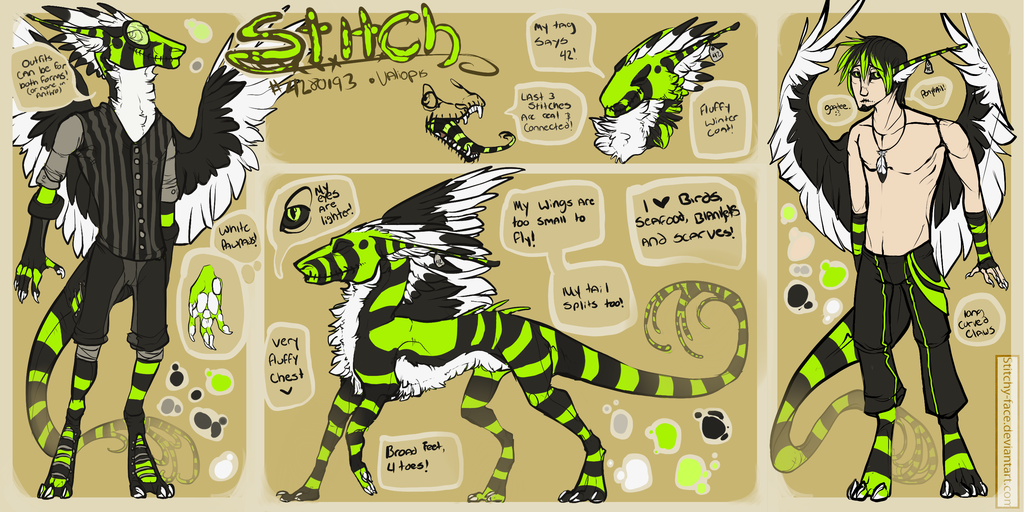 -He has a winter coat! You can see it in the top righthand area, he almost "sheds" his scales and grows a nice thick coat in winter. [his tail isn't that furry in winter, only the underside] This was spawned because some people mistaked him for having long fur and I enjoyed it.

-He has an added dot on the back of his head, behind his eye.

-the spike stripes now connect to he stomach line

-The face stripes Do not go over his muzzle and they stay broad.

-spikes got smaller on back, but they still fold.

-His wings are not big enough to fly with As much as I love seeing him with big wings, his wings /are smaller/ and were chopped off. He can only hop and glide with him. [However Cofri is excused from this, they draw amazing Stitchies uvu ]

-Note how his tail splits, I don't mean to sound picky but a lot of people draw it like an awkward pointy hand. It just looks weird xD

Stitch's original family ties cannot be traced back to anything however it is known that Stitch was a young man in one of the great wars of Calibreon, very erly on however. Low-budgeted and desperate scientists would take bodies of dead or half dead soldiers and use their DNA to be fused into 'meat-puppets' as they said to create a supersoldier and a new breed to gain head in the war. Stitch was a fusion between multiple creatures and his DNA was spliced into the body of what he is now. When brought to life Stitch was extremely vicious, his triggers were and still are an extreme exposure to light [white things, walls, ect] ringing sounds and loud noises. All of his reactions were instinctively animalistic. After some time he had begun escaping VIA flight so they had to chop his wings to keep him from flying, so this gives him his small wings he has now.

Through time Stitch begun to learn how to shift from human to creature form but during one occurance and sedetation when they tried to give him his medication he cut wires which had sparked a labfire. Most other Valiopis, Stitch's created species were failed and lost in the fire with only some escaping, one of them being Stitch. Through hard times Stitch had been lost and looking for a way and stumbled across an old clocktower to which he resides in now. To "pay" for his stay he was not forced but really tricked into a form of gladiator fighting common in Calibreon in underground organizations. As for the rest of his past and how he had gotten out of his situation...well you'll have to take upon yourself to find this out somehow somewhere ;D