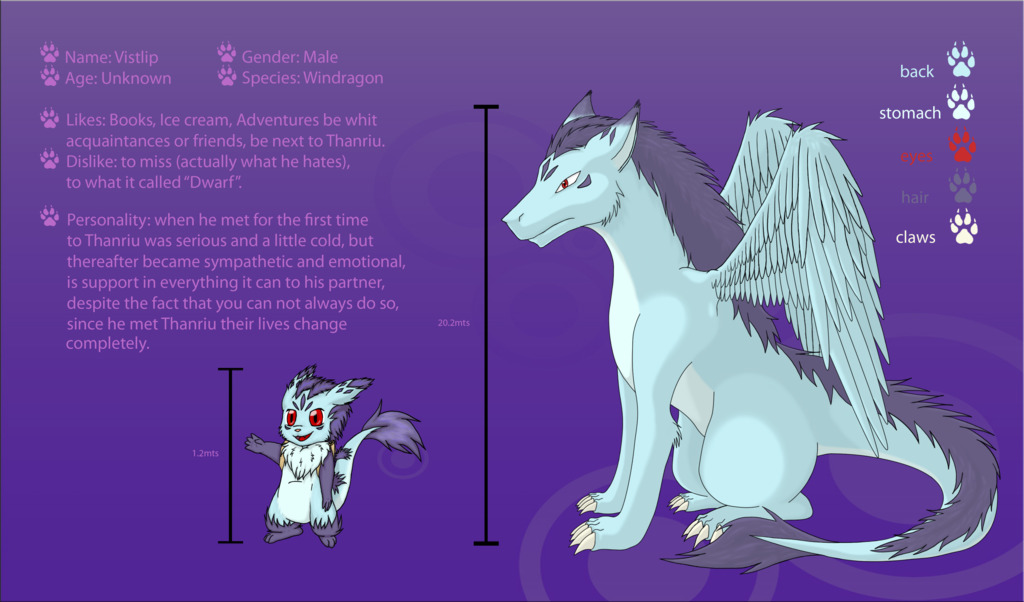 When the owner of the library had to travel out a search that I had to do, then the had been in charge of the care of the library, a few days after the departure of the OWL, Thanriu arrived by accident in that library (Spoiler) after having opened a portal to the "next dimension would visit", but on the way to the new place and by the inter-dimensional flow, Nekori and Thanriu were separated, falling in 2 different dimensions.

Thanriu, upon arriving in that dimension, Vistlip turned towards the intending to kill him, but was already tired of having to kill everything be to come to the library. After a conversation among them, Vistlip decided not to kill him unless he would show bad intentions.

Step time and increasingly more Vistlip was getting used to the way that Thanriu had, do it with, in the course of the time step with their arrival, Thanriu has been to help Vistlip rearranging the books to their new homes between other work more... but I get the time in which the OWL, owner of the library, returned from his trip, to meet Thanriu, the goes directly to attack him with the intention of killing him, disarmed not could do anything more to flee and seek Vistlip, without knowing that the was related to the OWL.

for when Thanriu manages to get where the OWL sees 2 as usual, furious with Vistlip, after disobeying their orders, without much more to do, Vistlip raises its back to Thanriu and begins to fly while Than begins to defend what it may, after passing in front of a shelf, both realize that only one book in specific had begun to shineasking why, without hesitation or two times, takes the book and opens it, then do this, the book begins to re-write only, showing each their pages a script which recounted a story, the OWL to see what was surprised to see what was happening, which went straight to attack with everything what couldThanriu after reading each of the fragments of stories that he had the book, the OWL began to weaken, in their desperation manages to give an accurate attack, which began to weaken to Thanriu to let him unconscious.

After regaining consciousness, Thanriu the beside Vistlip while it was covered by one of its wings, dubious and poorly understood what was happening he asks to the what happened after fell unconscious, then talk for a long time about what happened, the OWL enters room talking with Thanriu, mainly to ask the as had come to this place and all that had happened since that came and his goal by meet.

After thinking what has happened and the conversation which was Thanriu with the OWL, the reaches a conclusion, not be could exercise any punishment that had come by accident, after knowing that, both, both Thanriu and Vistlip felt relief, but the decision of the OWL doesn't end there... Thanriu had that leave in place... Vistlip to find out what began to feel sad... had been able to experience what is to be with someone more and more important, friendship...

Thanriu after having prepared their things to continue the journey, also did not want to go there, because that might be her last time in that both might be, after having shared too close together. the OWL after the prepare, makes delivery of three books and a card to Thanriu books were unique and it would not be able to find in any other dimension, and card was going to need to place that he visited, after this, it opens a portal and tells him that by entering in the, you will be able not only to continue with his trip, if not which would also have a unique opportunity to learn how to better control her powers and skills, after saying goodbye to of the Vistlip, crosses the portal and goes towards the other dimension, arriving feels his backpack much heavier Unlike before, after review it is found with a small dragon (of the image >w>) after a short exchange of words was announced dealing with Vistlip and that licensed the OWL, the could accompany him on his long journey between dimensions and drawing could learn new skills, after hearing this good news, is a mysterious being which threatens them both so that they could identify... *continue~*

1.- "Vistlip" name was taken from the Japanese group, which has the same name

2.- this Dragon began to be called that way then that Thanriu gave that name to be able to refer to, because before I didn't have any name

3.- "Dantalian" library name was taken from series Dantalian no Shoka, in honor to the great library to which referred you with the same name

4.- Vistlip has 2 forms, the Windragon, which is the first that uses, and the second is the one shown in this drawing

5.- Vistlip design in this drawing 70% was based on an image found on the Internet of a somewhat similar dragon from a Japanese game (which obviously keep looking for DX) http://i1119.photobucket.com/albums/k633/thanriu/1.png