Smoke (art by ZhaKrisstol) by Hydrax 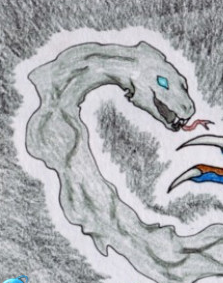 Hi ZhaKrisstol i just wanted to know some things about the smoke snake-thing http://zhakrisstol.deviantart.com/art/Alex-for-art-trade-68132303

I would be very happy if you could answer my questions about the smoke snake-thing :)

I never thought about those really, let me think...

1. It can talk - in a slow light quiet hissing voice.

2. If someone tries to grab it, it gets annoyed and turns into a swirling tornado of smoke.

3. It can't grab anything, but can move light-weight stuff slowly.

4. Age is unknown, though it is thought that others take it's place when gone.

5. They can be temporaily removed rather than killed - they don't like extreme cold, and tend to vanish to nothing in it.

Do you mean that another smoke snake-thing will come and take its place when it's gone?

Yeah, like a younger/smaller version that grows with time

Do you mean that they can be rebirth like the bird fenix that rise from it's own ash?

Forgot to ask some few things ^^;

Sort of. They re-grow from a small wisp of their smoke.

I suppose they would feed on smoke and fumes.

They can suffocate people/things to death by coiling round them if they want.