Amy awoke to find herself wrapped in a blanket floating above her bed. Well, awoke isn't the right word she thought. She was conscious but still dreaming. She couldn't quite control the dream yet but that was fine, preferable really. This was the moment she treasured, when her dream was an experience. She was vaguely aware the more control she gained the closer she was to waking.

She found herself giggling as the blanket tickled her. It wasn't really a blanket she knew but it felt like one. It was invisible but she was wrapped in it and she knew it was what held her up. It was a warm and wonderful blanket. She giggled harder as its warm fuzzy threads tickled her all over. She felt an almost childlike delight as they played. The blanket's warmth skittered about her smooth skin and caused her to moan out to her room.

Amy was almost surprised with herself. That felt good. Her flesh tingled all over from her blanket's caress but now it was different. She could feel it wrapping about her legs and stroking them. Her hips writhed in the air against her unseen lover as she felt its touch make her skin dance. The heat was spreading through her, filling her body down to the core. She liked it. She loved it. Her hands along herself just to feel the sensation of her own touch.

The sensation was moving up her body. She could imagine it in her own dream. The blanket had wrapped around her pelvis now reaching up her belly to her breasts. She welcomed it--wanted it. It was no longer a blanket. She couldn't explain it if she wanted too. It was male but not a man. It had hands but they were everywhere. It was spreading up her body and getting better by the second. It was an aura of passion. Passion her toes felt right down to the bone like fire.

Amy whined to her lover as she could take it no longer. Her hips gyrated and bucked in the air in frustration. She feared real need might make her drop from the dream but all thoughts fell away as she felt her blanket join with her. They were making love. Its touch so much more material between her thighs, the heat so palpable it drove her wild. She heard her voice scream out in pleasure below herself. There were more sounds behind her, moans, cries, and gasps, all in her voice. Amy rolled herself to look down and found she could see herself wriggling under the covers, her body in the thralls of passion as her hands ravished her. Just watching it happen caused her to moan and lift her hips higher for her lover to take. She could feel his hands holding her shoulders. He was enjoying it too. He wanted her like this.

She was still so warm, burning up even. Amy giggled with herself down on the bed at how they could feel each other. She could feel her hands on herself in bed and her lover's hands on her in the dream. The dream had not become any less vivid from waking either. Or maybe it was all part of the dream? She had never stopped floating or changed perspectives from above. Always looking down at her...sleeping self? That didn't seem right. Didn't she have to close her eyes to hold onto the dream?

As if hearing the thought, the dreamer in the bed bolted her eyes open. Amy saw shock and confusion in her own face. Then something registered with the woman in bed. Her confusion gave way to terror and Amy saw herself screaming and recoiling in the bed. The woman below threw the covers over her head and shrieked. She struggled inside the blankets and fell out of the bed, taking her shielding with her. Feeling something was wrong, Amy turned to look behind her and felt the same fear and panic of her counterpart wash over her. She was no longer floating in that warm sensual blanket. She saw what her other saw. Wrapped around her, enveloping her, constricting her as sticky, nearly invisible webbing. Over half her body was trapped inside the maw of a giant spider. Amy's body was burning and screamed for help. With one free arm she reached out to herself crying help me as the spider's throat lurched and dragged her head deep within its jaws. The last thing Amy saw before disappearing into the beast's gullet was her body contorting on the floor, thrashing to escape its own fate.

The weeks later Amy's body was found. She had not shown up to work nor had her car left her driveway. Neighbors finally took notice and called the police. The official cause of death was labeled as a heart attack but no one who saw the body would ever shake the image of her face locked in a scream of abject horror. 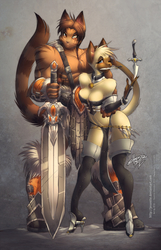 Been creatively stifled for a while now. Tried writing some stuff. It's more of an exercise than anything else. In answer to any questions, "Up to you."

{EDIT}: Hm...format seems a bit screwd up after upload...