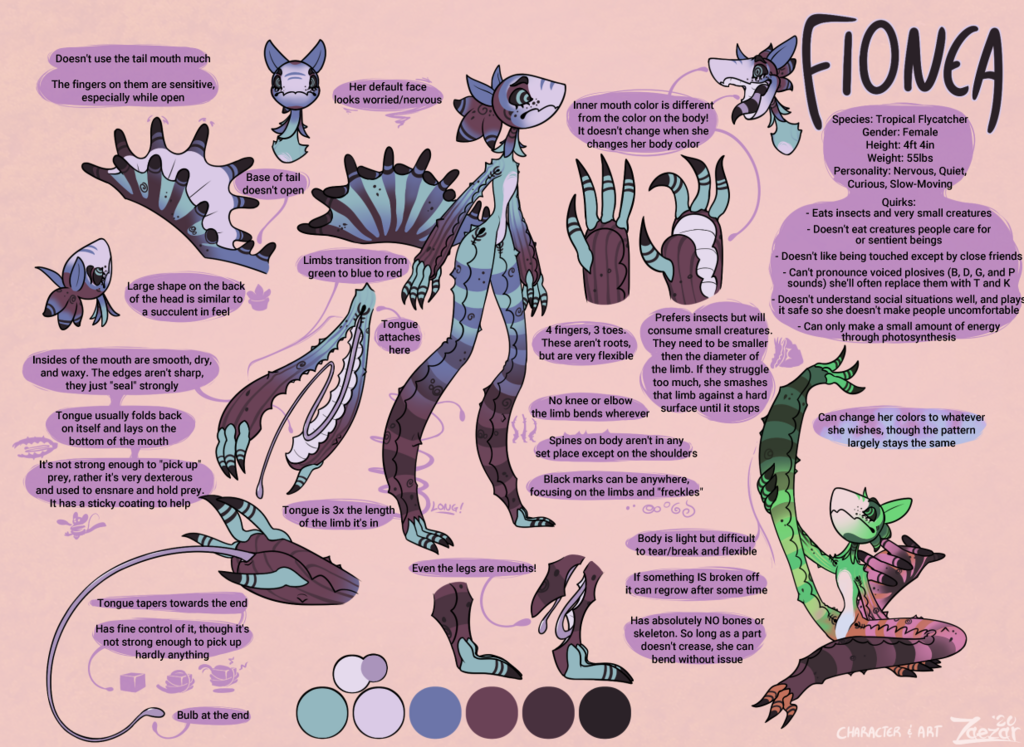 Character info here, below is more story stuffs because I want to talk dangit.

Hey look I got a new character! Fionea is a Tropical Flycatcher. She's short, she's shy, and she will absolutely eat all the spiders in the house. Normally reclusive around strangers but she can open up and be a fun interesting person to be around. She also soaks up social situations like a sponge and is constantly learning! Her color changing pattern usually lets her hunt easier in the wild but nowadays that's not really a factor. Her name is pronounced "Fee-Own-E-Ah" for any curious.

You know I'm a character designer. That's what I pride myself on. Designing, making, and developing what we in the fandom interact and work with. However I often have this issue where so rarely a character "grabs me." I LOVE a lot of characters but so, so, SO rarely do I go "I have to have that" instead it's a passing appreciation of what they made and I move on.

This wasn't one of those times.

I saw this post and couldn't get them out of my head https://www.furaffinity.net/view/36785175/ I was imagining how a plant-based character would interact with my main cast, how they would introduce each other, what would happen if X or Y situation were to occur, the whole thing. Heck I even poked a couple of friends with the thing and went "I'm tempted but..." And yet in the end I put in a bid and won the character. The last time I bought a character was WYNN. Which was 5 YEARS AGO. This Plant Gal is the 4th character in my crew that's not made by me. I make a lot of references for people, but rarely can I afford to put in the time and heart that I can. Because I had a new character of mine I took the chance to really really delve into it. In fact, this ref, from the first sketch to the final form, took me about 12 hours to complete. You can see that whole process over on Twitter where I showed the major steps I took https://twitter.com/Zaezardraws/status/1274390671319797763. If I did that much for all the refs I made, you would be looking at around $500 for an image. Maybe some people would be willing to pay that, but for others its a lot of needless detail for them and would be a waste. It was worthwhile for me in this case though as I've had people start asking questions on the character and what would she do in a few situations, all of which I've already covered either in some inferred way in the ref or in all my thinking through the design as I was making it :D

In the end I'm very very pleased with her. Hope I get the chance to make more art of her soon, but we will have to see~