Benefitting from Shark Week by Youkai-Chan 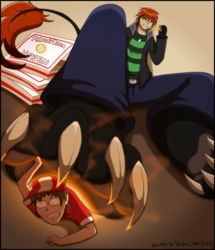 The scuba-wearing canine had an uneasy feeling he was being watched. As he spots the faint outline of a shadow coming from the deep blue, his first instinct was to believe it was a shark.

But something was wrong. That shadow...it was way too big to be any normal shark. He began to swim up to the surface to return to his boat for safety. Wondering whether what he saw had vanished, he turned his head around...only to see two piercing sea-green eyes glowing from the sea's dark depths. Whatever that thing was, it was heading right towards him.

To fit with the spirit of this week celebrating our sharp-toothed aquatic pals, I give you some vore! Starring Alek. (Yes, I know he's technically not a shark. Shaddap he's shark-like enough to earn a pass. XD)

Our unnamed diver-friend who just became Alek's lunch has also met a new friend! (Could it be Snuffy the seal's cousin? Perhaps. My my, trying exotic cuisine today are we? >:3)

Anyway, I had way too much fun doing this. I'm especially happy with the first and second panels (dat bulge), although Alek's belly plates, in hindsight, I should have omitted the abs XD
I also really like how the water turned out, the perfect shades of blue. <3