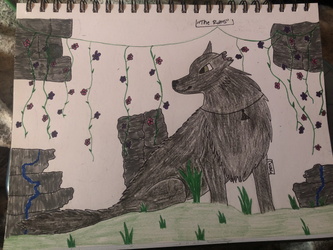 Artist Notes:
I finally finished this, it was done totally freehand and I am so proud of how it came out. It took so long but the outcome was so worth it. I struggled a lot with the anatomy and just the paws in general but I got there!

I had the idea for the background for a while, I was inspired by an old grotto that when my husband and I first met on Second Life we used to hang out in. It started to remind me of that. Even though those where darker times for both of us, I love being able to bring positivity to them.

And as usual I had to add my vines! Haha.

I dont know if you notice it or not but I did fuck her bottom jaw up as well and I'm super annoyed about it, but there was no way to fix it, and I just chalked it up to the fact that I'm still learning.

You may also notice she has two ears now.

For a few reasons. I started realizing that having to draw a broken missing ear constantly was getting annoying, and secondly the story behind why she is so happy is this:

Kou was out in the territory while her mate was searching for food. She ran into a wandering shaman by the name of Nova, whom promised her mental and physical healing, and another chance at happiness within herself. The shaman granted her this, and in that it restored her ear back to normal as well.

So really, Kou is just a -Basic Bitch- now LMAO.

But I figured that was a good enough reason as any, and that is why shes waiting for her mate so happily in the den, to show him she got her ear back :)