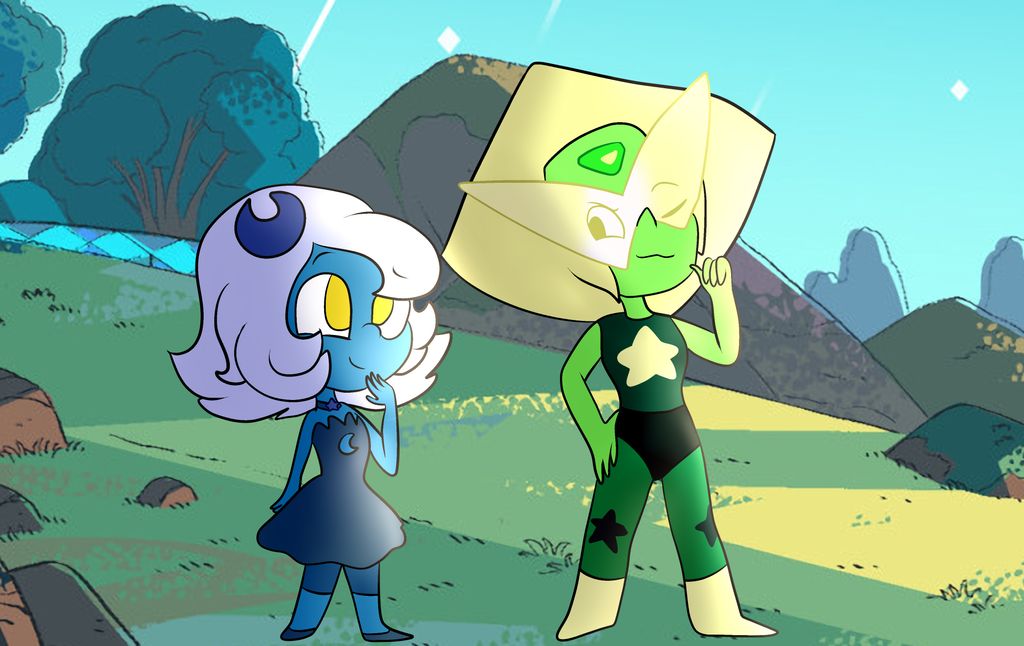 I did it all on my own - Peridot x Moonstone

The small runt of a gem moonstone called out to her old gem crush she missed. moonstone had always hid away during any danger. she was easy to poof, but strong as hell with ice and snow abilities.

"nyeheheheh! you like it, Luna~? I see you, too, have upgraded your appearance modifiers as well?"

"Uhh.. yea! pretty much.. being a crystel gem is alot better then it was being alone in a cave for 500 years hiding from homeworld.. I'm just glad it's all over. so! what happened..? I noticed that the planet was kind of.. destroyed.. while I was away.. "

peridot blinked. she shook her head.

"just a crazy spinel that injected bio-poison into the Earths crust. yknow. someone trying to kill Steven. that kinda thing."

"But I TOTALLY kicked her butt!"

"Uhh doii! you should have BEEN here Luna! that gem was CRAZY. But I totally hit her with my METAL powers. wham! and THATS how I earned my stars!"

"but.. I thought that was because you poofed, from yellow diamond ways back.."

Peridot darted her eyes, and then chuckled a bit.

" We all know you didnt take the credit peri.. steven is always the one saving the day you adorable show off.. heheh.."

she spoke in her head, smiling.

been mising these two.. just been scared to draw them due to alot of my worries about cyber bulllies.. was told to kill myself over shipping these two in the past so I've been scared. but hey! I'll be brave. ;w;

thanks so much! just a little about my moonstone oc:

moonstones thing was she used to be a forced fusion of other moonstones that were shattered.. well uh..
shes not a 'forced fusion' anymore. its just that there were MANY Blue moonstone but only HER cut was rare enough to grant wishes on certain circumstances. she cant wish on her own gem, the wishing kinda works like a genies wish, be specific, and you can only get 3 per day. and the bigger the wish, the more tired moonstone gets. so when she got tired of being used, she took a ship and fled to earth and blue diamond ordered all blue moonstone shattered cause she was angry and afraid all cut of moonstone would run and betray homeworld. moonstone was always hidden in a cave she made into an icy wonderland. since she loved the cold.
until the crystel gems found her. and boom. crystel gem xD