Overheard: "Junk in the Trunk" by Xinjinmeng 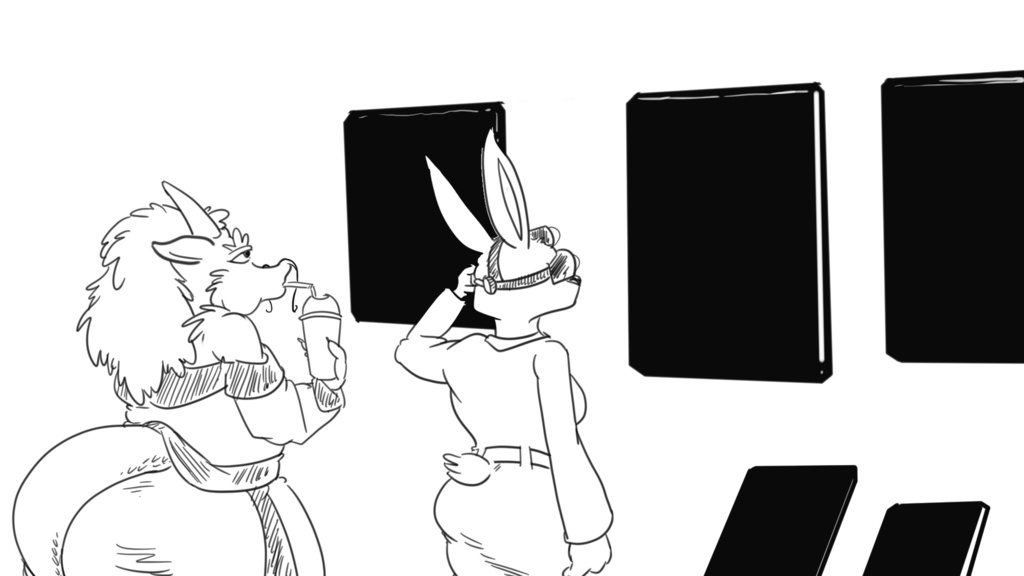 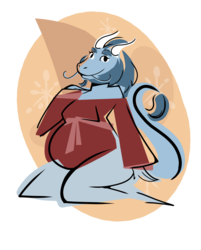 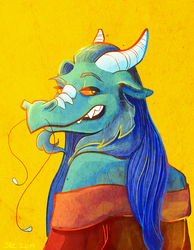 Overheard: "Junk in the Trunk"

Four of the canvases hung on the wall, with the two smaller ones propped on the floor. To the naked eye, the were a solid, matte black.

Innogen adjusted the band between the goggles’ lenses, for a better fit on her widely-spaced eyes. “I can’t see it.”

Xinjinmeng took another draught from her straw. “Did you turn the lamp on?”

“No, you have to turn the lamp on, too.” She resumed slurping from the straw, she wanted something to block the complaints coming out of her own mouth.

Fumbling a bit, Innogen eventually found the switch on the side of the goggles she wore. There was a click, and a whine of capacitance, as the ultraviolet light on the front came to life. “Thank you.” The light it radiated wasn’t visible to ordinary eyes. “Why aren’t these pieces under UV lamps?”

“They took the UV lamps,” sighed Xin. “They left the paintings.”

Innogen played with knobs on the goggles. “It doesn’t look like the painting changes all that much under different frequencies, it’s all 300 nanometers or more. The mezzomiliardesimo that commanded the heavy prices had variations all across the spectrum, from 500 all the way to 10 nanos. There’s no undercoat, no layering, it’s just … there.”

Innogen tilted her head, scrutinizing the oblique canvas. “I can see that. The brush strokes, the paint layering. Even some corrections. But there were a lot of these MMD paintings made using brush strokes, even the ones that were machine-assisted.” Her nose twitched. “There’s not even any deuteranomaly. It’s all rather basic, I’m afraid.”

Xin sighed. “So, what do you think they’re worth?”

Xin was losing patience. “How much should I ask for them?”

“That’s hard to say, too. The market for MMD art crashed a year or so ago. Along with the parfumés, the Huygen-Frensels, all that extra-sensory art. Too many buyers chasing too much merchandise. It’s a hazard of art speculation.”

Xin fiddled with her straw, poking the dregs of coffee still in her cup. “How much would you give me for them?”

Innogen’s face was a contrite mask, and her guarded tone couldn’t conceal a thing from Xin’s jaded ears. “If you paid me a thousand, I’d make sure they’re probably disposed.”

“I was hoping for a positive arrangement.”

Innogen properly folded the goggles up and offered them back to Xin, who pointedly did not take them. “There’s at least three toxic substances in that paint, more if they used any transuranics. You can’t just throw these away, if that’s what you’re thinking. Do you have any providence for these, at all?”

Xin’s straw made noise, before she deigned to continue conversation. “Not a one.”

“No proof at all of who painted these?”

“I found them in the big trunk they left behind, at the storage place.”

Innogen implored, “Did you see these works being painted?”

“Are you a sworn notary?”

Innogen nodded. “Then there’s no providence. That might not be a problem because the artist is still alive and could admit to being the creator. But if these were abandoned, they’re almost definitely not going to endorse a sale. And if they did, they’d certainly want a cut.”

“You just said these were worthless.”

Xin’s frown threatened to droop off her face.

“Are you pregnant?” asked Innogen.

Innogen’s hand moved quickly and fluidly, thumb flicking open a silver snuff box and present it. Xin already had her fingers in the stuff before she even noticed. She inhaled the powder, the rush hitting her almost instantly.

Xin’s pupils rapidly dilated. Innogen’s stash was much stronger than she was used to, refined and pure.  “Oh my stars,” she muttered to no one.

Innogen put her snuff box away just as quickly.

Innogen nodded. “You wear it well.”

Xin wanted to speak, but then sneezed instead. “If you say I have a … have a ….”  She sneezed again. “A glow about me, I might be very …” She found it hard to have strong emotions. The snuff was stronger.

“I can’t promise anything, but I might be able to get some artists in here to take these off your hands.”

“Decoupage, mixed media, performance art, what have you. At the very least, it’s out of your house and you’re not in the red.”

Xin sniffed, reflexively. She wanted to cry, but the snuff had plugged something in her brain.

Innogen moved in close and gave Xin a hug that was proper and practiced. But Xin still felt reassured, the warmth of a warm body pressing against hers, it was a welcome feeling that filled a need.

“I owe you one,” Xin whispered.

Innogen patted Xin’s back, and parted. “You’re good for it.”