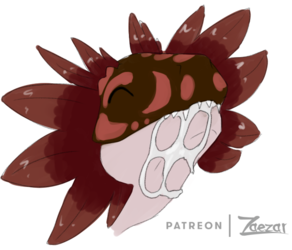 Being perfectly honest here, I adopted Kaimana mainly for NSFW fun. Who can resist a big sexy monster? Apparently not me.

Kaimana is a playful creature who enjoys spending time with others, eating flexible plastic, and having sex. So...not your average being. While he is big, he also tries his best to be gentle, since he knows he is much larger than most of his “friends”. His favorite environment to be in is jungles, he loves how warm they are. He also loves finding hidden pools and waterfalls, they are his favorite places to swim. He is always willing to make new friends, so feel free to ask!

[I /may/ be willing to roleplay Kaimana. I do not have a lot of time, and I cannot promise it would be the greatest as I am a bit rusty, but if you’re intersted, feel free to ask. The worst I can say is no. You should probably be open to NSFW in the roleplay, given Kaimana’s nature. It would be bonus points if you’d be interested in going halfsies on art of roleplay scenes we particularly enjoy!]