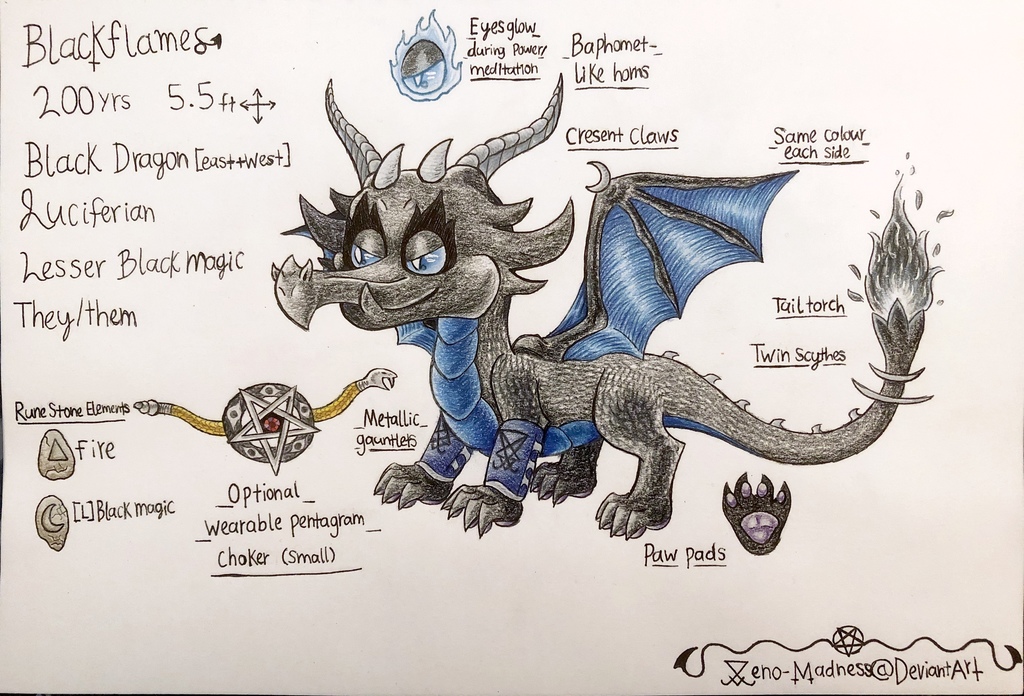 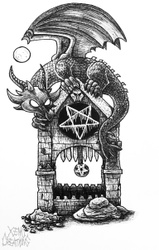 Because silly me forgot to post my animated gif (my avatar) of my new dragonsona here, I'm just gonna post the drawn ref instead.
Aye I finally got around doing my dragonsona ref this week, I've already added a bit of info here already on some basic statuses but will of course add a longer one at the bio. I hope the quality of this pic is fine since I wanted to brighten up all the little details I had added on this lil flying snek.^^'

ABILITIES
• Can breathe out black fire from the mouth like a typical dragon.
• The tip of the tail shaped like a torch can lit up very dark areas and use as a signal for helpful situations.
• Stand on all fours AND upright like a human.
• During gaining power from mediation, their eyes glow a very fiery bright blue colour that's very effective.
• Can charge at foes with the long thick horns on Blackflames' head and headbutt with force.

APPEARANCE
• Black scales all over body, electric blue eyes to the large scale plates running down the neck to under tail and on the skin of the wings (on both sides).
• Rounded head with fork-like skin plates stretching across each side similar to JennA the Raccoon's hair turfs, two long sabbath goat-like horns and two smaller thick tooth shaped horns at front, black flame pattern on each eye, long odd shaped sharp snout with two fangs jutting from lower jaw.
• Slender body with stubby sharp limbs and really long tail, small shards running down the spine to the end of tail, two blue metal-made gauntlets on each fore limbs with the Sigil of Lucifer printed on front with three shards running down each side of gauntlets, purple-grey paw pads on each palm.
• May sometimes wear the pentagram choker (as shown on sheet), the snake head acts like a lock once bitten onto the tail from other side.

CHARACTER TRAITS
Usually laidback and nonchalant around others as long as one does NOT disturb Blackflames' lair, they like to spend time in the wildness especially at night keeping everything in place. Like the raccoons, Blackflames can obtain incredible powers (obviously) but now from observing sunlight and moonlight, which increases power making it stronger if left under both for periods of time. If provoked by nuisance, she will not hesitate to ram a horn up their backsides or toast some roast if no one respects Blackflames privacy. Evildoers are also a problem for the dragon as well, all evil with no good in them (or forgiveness) are to be eliminated at once. This hurts nature and the Satanic and Luciferian creatures livelihood at that, and Blackflames is perfect for the environments protection against such destructive forces. She's pretty good around the raccoons and other guests that come by, they have no problem being around humans (unlike JennA) as long as the people in question are not poachers or hunters looking forward to Blackflames' exotic shiny scales ><,. They are also sometimes Lucicoon's message sender and retriever from The Darkness dimension located in the Astronomical Universe.

I don't have a backstory yet for Blackflames in the moment, this is all I have for them atm until the meantime,