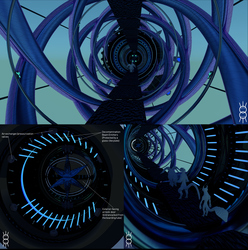 So for one of my recent animation tests I put together a sort of digital turn table for the sapient races. I thought this would be a good opportunity to explain a bit more about their physiology and natural history.

The Kuvmauta are the shorter and more aquatic of the two sapient Lejendairidan races. Their tails are flat and muscular for swimming and they possess visible claws on their upper and lower digits. Their four pairs of dorsal spines evolved into defensive spikes while the gills on the sides of their heads lost most of their function, that role being taken by a larger network of gills across their torso and inside the mouth.

Their eyes have a highly reflective coating which makes the pupil invisible in most light conditions. They have no eyelid analogous tissues, instead they possess a thick nictitating membrane (seen briefly in the animation). They are more predatory than the Epilloq, feeding mostly upon aquatic fauna which during prehistoric times they spent most of their time pursuing.