Face your death (V2) by Xarox 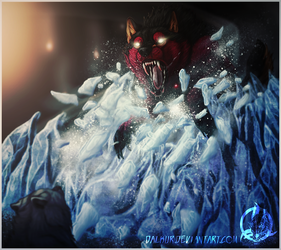 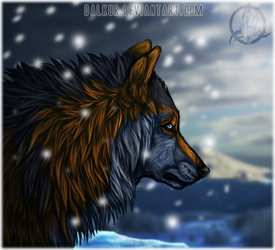 Another remake of an older picture. You can still find the old one over on my old dA account: http://realwolfshade.deviantart.com/art/Face-your-death-73676022

So what do you see here?
This is a scene of Lex's (the black and red guy) backgroundstory. As a pup he and his two siblings Luna (the one still alive) and Roscoe (the poor fellow you see in the lower left corner) were cought by humans and sold to a circus, while the rest of the pack was either sold to other people or were killed/died.
Because it became harder and harder to handle the wolves the circus men decided to give a last exciting show to their audience: letting the wolves shred each other to pieces.
Tormented into frenzy Lex fullfilled their expectations completly by killing the last two family members he had with him.

This is just a rather short version of what happend but I hope it gives a first impression of what is going on.

The whole thing plays in Teramar, a fictional continent of mine, where wolves are quite rare. The species Lex and his sibs belong to is the Dinaria forest wolf, a subspecies I created.

Any questions? Don't hold back.