The Saga of Fidonhaal: Daughters of the East - PREVIEW 3 by WulfeVanDerKross 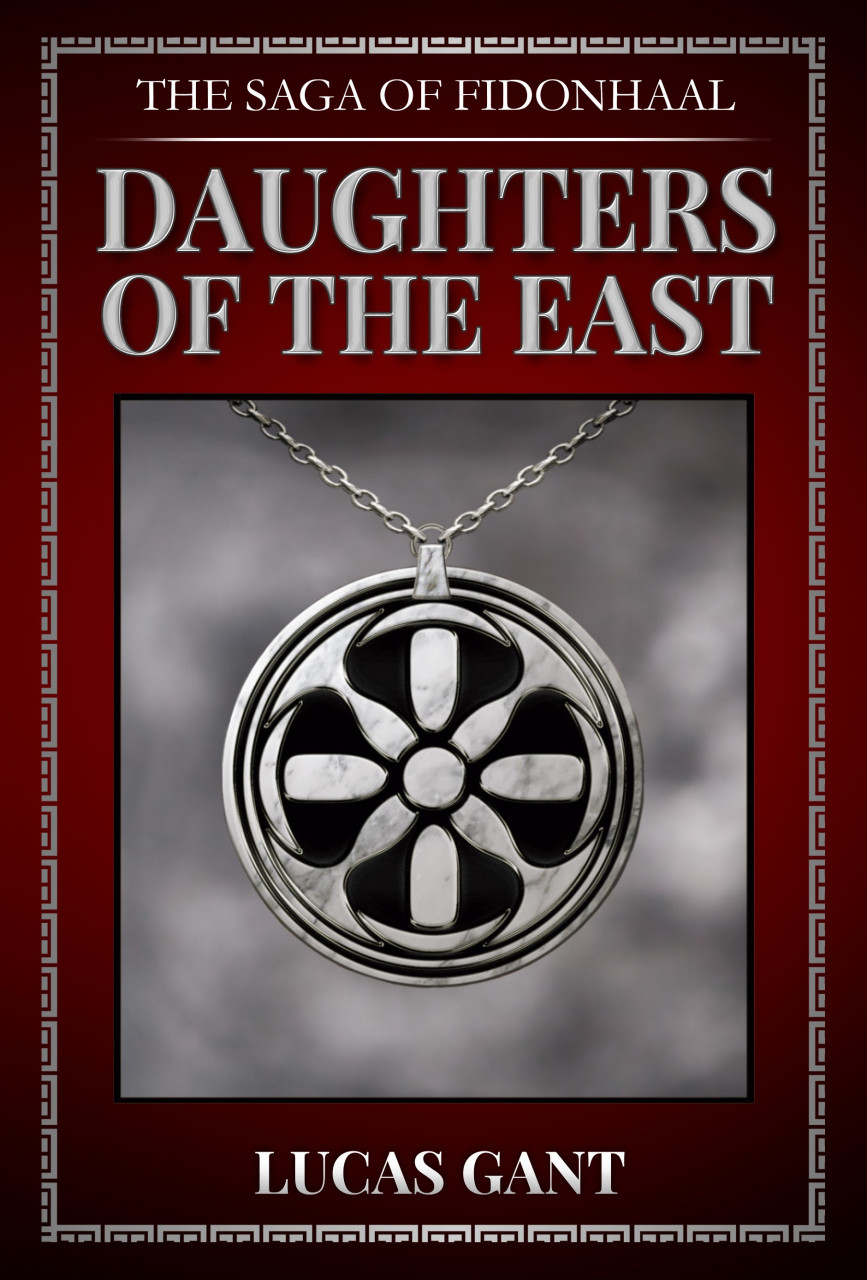 MIRA GREENHEART saddled up her horse, eager and nervous at going on her first hunt with her father, Virgaard. Having made sure that everything they needed was ready, the ten-year-old girl kissed her mother, Ann, and little brother, Isaak, goodbye before riding out. She rode a few trots out of the gate, then looked back at the village of Plen, her home in the great Santaru Forest. Her mother and brother were still standing together by the faded path that led past the main gate, waving their farewells alongside several other villagers who had stopped by to wish the two hunters luck.

“You two be careful!” Ann called out. “And don’t risk being late over the hunt! We’ll have a good Veronmay with or without fresh game, so don’t go too far for this!”

“We won’t!” answered Virgaard. “Though I’ve got a good feeling about this one. I got Mira here, and Onu willing, we’ll be back in a day or two at most, hopefully with a good boar or stag!”

“I know you will!” her mother said.

Father and daughter rode steadily on until noon, conversing quietly over the techniques to employ for whatever beast that might end up as their quarry. They also went over what to do in the event of encountering a cursed creature, or a blessed one. At the sun’s peak, the two reached a little clearing, a tiny island of nothing but grass in the vast ocean of trees, and stopped to rest a little as they fed their horses and themselves.

“You still feeling good and ready for all this?” asked Virgaard as he bit into a piece of dried venison.

“Still all bright-eyed and bushy-tailed?”

“It’s alright if you are, especially for the first time. I know I was. I barely slept the night before my first hunt. Did you sleep alright?”

“Yeah. Maybe I had a little trouble at first, but I wasn’t up all night.”

“Good, good,” Mira’s father remarked as he made a brief inspection of the longbow, arrows, spear, and knife that each had packed onto their horse. “It’s no fun hunting when you’re really tired. Can be dangerous, too, depending on how things go.”

Mira listened to her father as she ate a few pieces of dried meat and took a couple gulps from her waterskin.

“Is Santaru really that dangerous, Da? I’ve always felt safe here. I mean, I know there are plenty of normal animals that can hurt or kill you if you’re not careful, but do many of those bad animals that Raakaru made live here?”

Virgaard looked levelly at his daughter as he fished out a piece of dried fruit from his bag, along with his canteen.

“Well, I’d certainly like to say that Santaru is far safer than not, especially these days. We’ve been hunting and fighting the Lakons for four thousand years now. They’re still out there, of course, and I believe they’ll be with us in some measure or other ’til the world ends. But many say their numbers are far fewer now than in days long ago, and I’m inclined to trust them. They definitely aren’t gone though, and it’s always better to be safe than sorry when it comes to those creatures, especially out in a wilderness like here. Santaru certainly has its sacred places and havens, and the forest overall is good, I’m sure of it. But it’s not totally free of those monsters; no place on Fidonhaal is except for Karzynhaal. And this forest covers thousands of miles, so who knows what exactly might be in any given cave here, or pool or stream?”

Virgaard then pointed randomly at a large tree at the edge of the clearing. “There could be nothing behind that tree over there,” he continued, “or anything. A deer, perhaps, but then again, perhaps a Qualakar or some other monster. Who knows? Maybe even a–”

Virgaard and Mira froze stock-still at the movement that came from behind the very tree they were watching. With eyes wide, ears pricked, and nostrils flaring as they vied to determine what creature was moving through the trees, the two let out a breath of both relief and awe at the sight of what approached them.

An Arbonyn, one of the tree-folk, was walking gently toward them, gesturing peacefully that there was no need for alarm. When it reached Mira and her father, the Arbonyn bowed courteously. Father and daughter reciprocated as they admired its form. It was around two heads taller than Virgaard, who was quite tall for a Fidon at six-foot-eight. Its body had the appearance of yew bark, though the bark of the Arbonyns varied in hues and patterns similar to trees from all over the world. Its eyes glowed a haunting, but benevolent light of green-touched white. A great branch stemmed from its forehead like a horn, and its overall form seemed that of a man. After the greetings were complete and the tree-man had given the hunters a moment to look him over in silence, he spoke.

“Indeed we are,” said Virgaard politely. “Getting something good for Veronmay, if we can. Is there anything the matter with this place that we should not hunt or linger here?”

“No, no, not at all,” replied the spawn of the angels Terranah and Stromarus. “No trouble have I seen here. Many deer just a little over that way, though. Very good to eat on spring’s first day, I’d say.”

“I’d say we’re in agreement!” said Virgaard as he smiled at Mira’s excited grin and shining eyes. “Mount up, Mira, and we’ll see if we can’t get a deer each. You have your bow and arrows where you can get to them easily?”

“You have our thanks, Rovnillath,” said Virgaard as he mounted his horse. “Farewell!”

Mira and her father cantered swiftly back into the forest, toward the herd of deer and the promise of a fine and savory Veronmay feast. 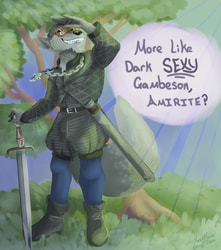 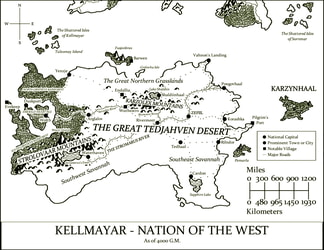 The Saga of Fidonhaal: Daughters of the East - PREVIEW 3

Here is the third preview-chapter of my debut novel, The Saga of Fidonhaal - Daughters of the East, which is an "anthro/furry" fantasy-adventure story that's now available in eBook and print-on-demand Paperback on Amazon!

If you like what you see, feel free to check out my other sample-chapters here on Weasyl, as well as maps and other artwork relevant to the story and setting at large!

If you think you'd enjoy reading the entire book, you can get a copy by following this link:
https://www.amazon.com/Saga-Fidonhaal-Daughters-East-ebook/dp/B09RJQ24BD

Daughters of the East is set within the world of Fidonhaal, a wondrous world inhabited by creatures known as the Fidons. These beings, from our perspective, appear as anthropomorphic wolves, and the name of their race translates from their language as "Faithful One(s)." These people, and the world they live in, have endured ages of conflict and peace, triumph and tragedy, and good and evil, these times involving both the mortals and the supernatural, divine and unholy alike.

The events told within this novel are but one part of this world's saga.