Jock Queen by EvonAllure by WolfRider 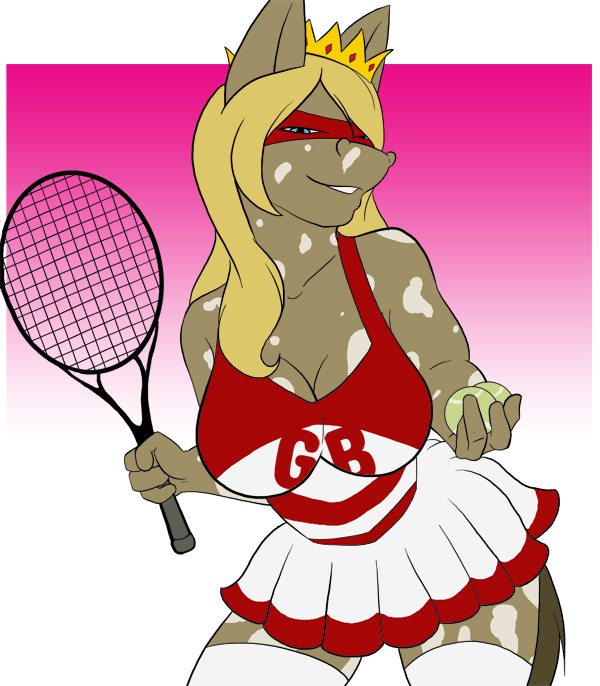 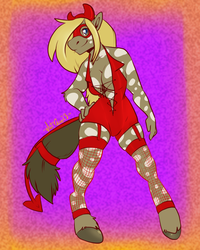 Another Awesome commission by

Here we have one of the Bitchiest members of the Gym Brats Gang, Jock Queen.

Appearance: A tall 6’4” female Horse with an athletic cheerleader built, she has blue eyes, long Blondie hair and has a mix of white spots and splotches on her brown horse fur and skin. She also as a large 40DD bust for her size, since she is a popular girl at union university.

Outfit: A red and white cheerleader outfit with the big GB logo in the middle. Long thigh high white socks and red and white shoes. She also has a red pointy eye mask to disguise herself as well as a golden crown with red jewels.

Powers: Genetically modified body which gives her enhanced strength, speed and durability. She is alot quicker than her other fellow gym brats as she can bolt at near 90 km/h in short burst as well as keep a constant speed of 60 km/h. She is a very dirty fighter and a master of traps and pranks, as she and her fellow nasty girls would lure their victims into rigged rooms containing torture devices or launch a prank attack to stun and confuse the victim before ganging up and pummelling them. Being a cheerleader and skilled in Gymnastics, she is flexible and agile and loves to grab and swing heroes around as if they were batons. Her weapons of choice include her own foul smelling gym socks which she can slip on like a glove and clamp around someone’s muzzle to slowly overwhelm them, a steel tennis racket with various tennis ball grenades, and red and white Pom-pons with hidden leash guns inside them, which can be fired to grapple around the neck and body of a hero and allow her to swing them around, yank them towards her and force them to do tricks for her. She is skilled at blackmail and has stronger Charming powers then Fitness geek so she can get her prey nice and close to get what she wants.

Bio: Currently a student at Union University studying fitness and graphic design as well as a cheerleader for the universities sport teams. Millie was recruited into working for head coach when she first started studying at the college, and soon began to intimidate and steal from her fellow students, teaming up with her on and off boyfriend Desmond Edwards, a big time jock at the University and the gym brat riot organizer Jock King. Many suspect that she and Desmond are members of the gang but no one can prove it or are too scared to expose them.

Personality: She is a literal bitch to people when she doesn’t get her way, she will act sassy and kind at first but then she will turn on you when you are at your weakest and steal your lunch money and iPod. She is always able to charm her way out of trouble without fear of being exposed or put in detention and she can always bet on Desmond backing her up, even when her bisexuality kicks in and she dates another guy or girl behind his back. She thinks of herself above all other women at Union and will often get into a catfight with another girl in public or private. She often does get into Arguments with Desmond but truly loves him...until she spots the next hot stud or gal.

Full Profile will be posted separately.

Jock Queen and the Gym Brats belong to me