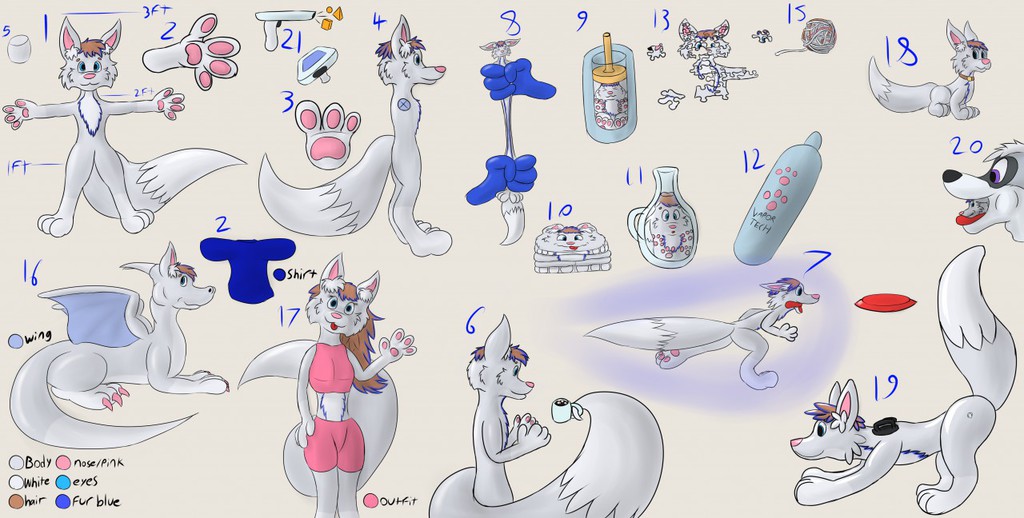 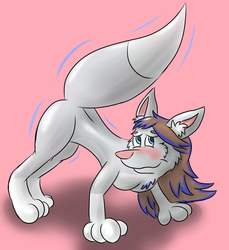 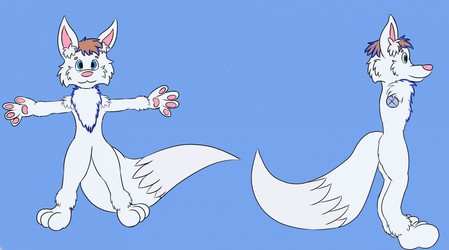 (1)(4)Technology Tea Tiberius the Wolf the Third (or Tech for short) is a childish young fluffwolf, a one of a kind creature born from a family of over 400 wolf siblings and a loving mom and dad. A fluffwolf is a wolf made entirely of fluff and wearing either nothing or his iconic blue shirt(2) normally. As a result he weighs much less than 20 pounds and is very similar in nature to that of a living plush wolf, making him possibly the softest living creature, smelling strongly of marshmallow, and feeling somewhat like one as well.

Tech is only a pup by most standards, being very naive and sometimes even foolish. Tech, however, is a very fast learner and in his short time has already become quite adept at technology. The wolf tries very hard to be both kind and caring. His goals in life are mostly focused on helping those near to him.

Tech’s personality is that of a small, kind, and caring child. It is not out-of-the-ordinary for the wolf to empathize strongly with others, and be seen attempting to help them in any way he can. Further, he is easy going, and only rarely becomes angry. The small creature also boosts a very affectionate and energetic personally! He always enjoys hopping in on his big paws (3) and giving hugs with his incredibly soft paws(2) or prehensile tail.(6)

To some his energy can be overwhelming, being too much for many to deal with. But the wolf enjoys his energy, sometimes a bit too much. One might find that Tech as an unusual allure to Frisbees. Even to the point rumor has it a loud crack can be heard as he takes off at high speeds after them.(7)
Despite his seemingly foolish nature, Tech is often very deep and insightful and his friends often like talking to him as he is good at listening and sympathizing with them even if he does not have an answer for their problems. Tech however often does have answers for problems being the inventor he is! Much of the time he tries to fix the problems with the aid of his UHD (universal handheld device) reality altering raygun and all-in-one tool.(21)

While good natured, the wolf also has a soft heart and cries easily if insulted or teased. Further, he is very gullible and rarely is able to tell if someone is being sarcastic or joking. It would also be advisable to avoid any situation where one might encounter a situation in which Tech tries to sing. This little wolf could not hold a note if his poor life depended upon it.

Tech enjoys trying everything at least once and often finds that he is good at most things he tries. He does not mind taking a lot of abuse from others (especially that of a toony nature). In fact the small wolf has a passion for exploring his unique bodies properties. He surprisingly enjoys the sensations of having others test or enjoy his elasticity(8), or compressibility(9)!

His body being the way it is has almost no limits to how it can be manipulated. This includes existing in any state of matter, liquid(11), gas(12), and of course his normal solid form. Although normally even when compressed and molded his body maintains its softness.(10) That coupled with his love for snuggles means that he loves becoming clothing, socks, a towel or other soft fabric like things. Further his body can be dismantled without causing him any harm or even making him lose awareness.(13)

Further Tech enjoys taking on many different forms. One of his favorite things to do is assume other species such as, dragons, fish, birds, almost any other mammal or… almost anything. (16)(18) But also likes trying other changes too like becoming female(which can be triggered by adding ginger to him)(17), shrinking(8)(20), age reductions(18), or becoming almost any other material. He especially likes becoming rubber or vinyl like materials(19) and being made into pooltoys or balloons!

Tech LOVES being small however and this and his love for close snuggles often means he enjoys literally getting inside his friends.(20) Techs love for warmth and snuggles, as well as his flavor means he is quite happy to be meals for close friends.

Another good note is that Tech’s tail is has a “loose thread” at the tip and if pulled the entire wolf might come apart!(15)

His skill, despite his young age, may arises from the fact he is an embodiment of the imagination of a “higher plan” creature—a fact to which both Tech and his creator are unaware. His "imaginary" state of existence gives a rather unique ability—the power to enter a thought-like state. (not shown here) Unfortunately, while existing as a thought, Tech is at the mercy of whoever’s imagination he has embodied. Tech very much enjoys using his power to enter and explore the dreams of his friends.
All in all Tech loves being friendly and hopes that you all do as well!