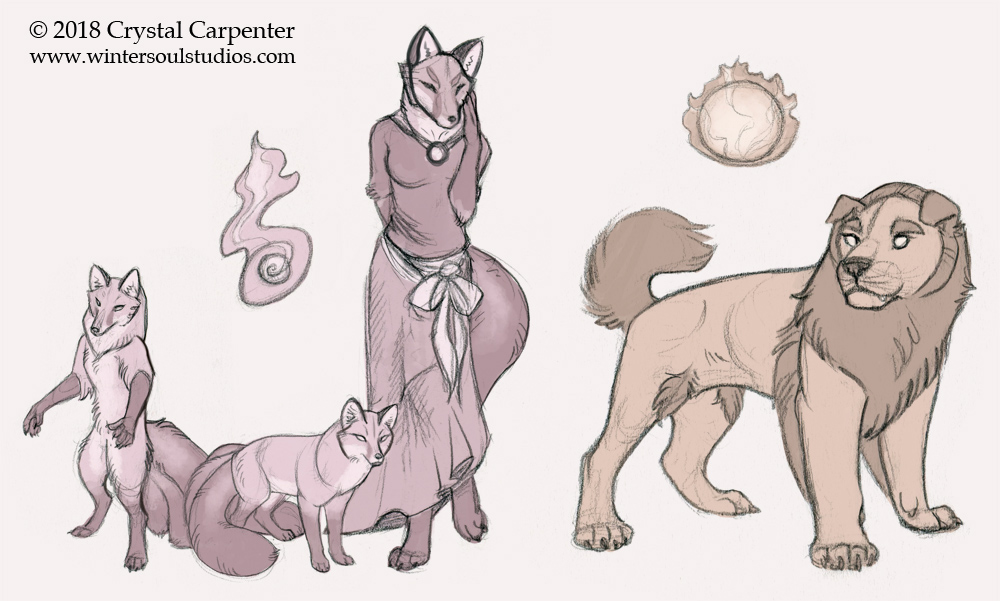 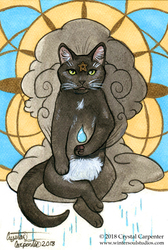 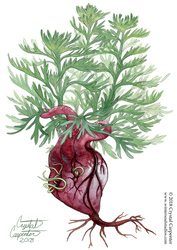 **Reminder: The first auction for Whisps will be held August 17th - 20th.

Now that we’re introducing various species, we can start looking at size and form comparisons!

The creatures we’ll be dealing with in the adoptables all have at least one foot in the spirit world. To what degree varies, however. The Shisa, for example, are a creature which is straight forward in their forms. Either they appear in their spirit form (orbs), or their physical form. More trickster-like creatures, such as Whisps, love to take on various forms. Both of the pictured creatures have been known to embody pendants and statues. In modern times, the Shisa have almost exclusively resorted to living in the spirit world, while occasionally embodying statues.

Whisps are an entirely different class of spirits - the deceased. Most of them look as they did while they were alive, or will take their orb form (which is smaller than the Shisa, and has a spectacular fire surrounding it). Eventually deceased spirits might find that they have a larger range of movement, which is especially eerie to the living who might expect to see their deceased counterparts moving naturally. One prank trickster spirits are especially fond of is standing on two legs. In this form, their paws can grow to be better adapted to manipulating objects, plus communication with other species develops. Further east, Whisps are notorious for taking outright human forms. On the one hand, there have been cases where shapeshifting to a human has made for long lasting benevolent relationships between vulpine and human. There are cases however where the spirit feeds off the energy of humans in a vampiric fashion. Either way, there is an advantage for the fox to gain energy from the illusion. They are also known to not be very good at holding the form, especially in newly deceased foxes, (older ones are much better at hiding this). There’s always something slightly off beat about all of their shape-shifted forms, so humans can take comfort in knowing that a bit of discernment goes a long way in safety. More commonly in the west, Whisps will take on the forms of hybrid creatures (scales, feathers, serpentine look). This form, however, tends to be more temporary than other shape-shifted forms, and tends to be used for defending their living family against hunters.

There is also a phenomena in Whisps and other trickster type creatures to grow multiple tails over time. This does not appear to be an illusion like their other forms, but a consistent feature of the individual. It is hard for the living to grasp this phenomena since “time” in the spirit world is not the same as time in the physical world. Time in the older foxes seem to be more so an accumulation of names, power, wisdom, and knowledge. Why this feature does not appear in species such as the Shisa is still unknown. Coat colors also seem to be correlated with spirit world time, although this is possibly due to “distance” from the physical world. The more recently deceased still carry their natural color, but older foxes, as seen in Shisa, appear in odd coat patterns and colors. This is also a consistent feature.

Since this is a good opportunity for size comparison as well, all of the sizes here are average. For the most part, Shisa are about the size of a tiger or lion. Some are larger even than that, up to around shoulder height of an average human, while others are exceptionally small, around the size of a larger dog. The average size of Whisps are equal to that of their living counterparts. There are reports around the world of giant foxes. Those who have studied the Whisps think that the gigantism is an illusion for defense, similar to the reasoning for western Whisps to take on forms of hybrid creatures. This line of thought is due to the accounts of gigantic foxes generally describing the creature as aggressive, whereas the personalities of these spirits are often playful and curious. This goes to show, not every character is alike, everyone has their own personality and story!