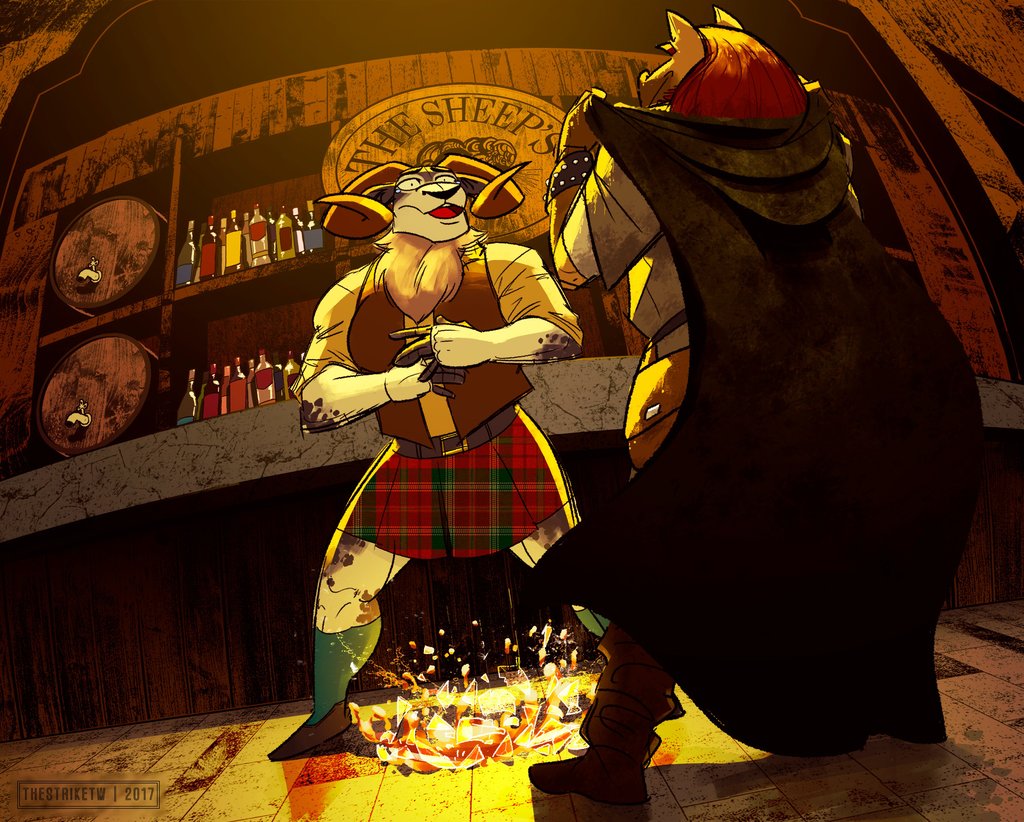 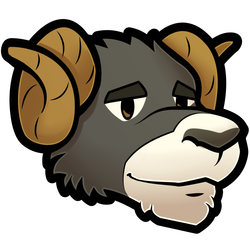 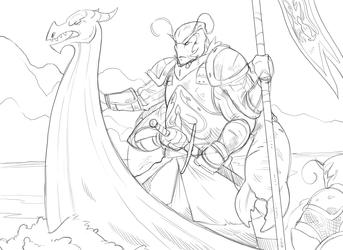 The Shattered Reunion (Seumas and Valdor)

Seumas had been getting ready to close "The Sheep's Tale" after another successful night of business, not that it was any different from most nights. Aside from what looked like a nasty storm that was about to cast its deluge on Iverness, the ovine had managed to get most of the patrons off their bums and heading towards the door, while his staff were tidying up in the back. The Scotsman saw to it that everything was cleaned up, helping with the last of the chores that needed to be done before dismissing the employees for the evening.

"Aye, don't worry about mae. I'm just going to clean a few more mugs and mop the floors before I close the shop. Everything's ready for the next night, so just go ahead and turn in early. Boss' orders!"

The man was all by himself as he hummed a tune while closing so late ... it had to have been nearly 2 AM in the morning by this point. There was nothing more to be done once the ram had time to tidy up a few remaining touches in the pub. Pretty soon he would be closing shop himself and turning in to sleep in his own spare room nearby the pub... but that was not before the door opened with the tall cloaked figure coming in. The streak of lighting only made the silhouette more menacing as the stranger stepped inside, soaked no doubt from the Scottish rain giving ambient noise.

"Pardon my rudeness..." The grave voice from the stranger began to pierce the silence. Seumas' eyes were drawn to the man who hide his face, but couldn't make out who it was underneath the shawl.

"I figured you would be closing soon... but I was hoping I might have caught the owner by himself. I..." A slight hesitance seem to linger in his request, before the man finished his sentence with resolve.

"I just want a drink. I traveled far from my homeland so I could have a pint of Ale from this pub. The locals said that a Mr.
Mackintosh had a wonderful ale, and I just had to have some."

Normally, the ram would have probably guessed the stranger was just a drunkard trying to get another fix of alcohol, though there was a feeling that he couldn't shake from the figure. Even in his rights to decline the request, the sheep figured the poor man was probably soaked wet from his walk in the rain. The fireplace had yet to be put out, and surely he had some extra stock of ale for tonight he could manage to spare anyways.

"Ah... well, it's not something I would normally offer... but I can sense you wanted to see me in person. Please... sit by the fire place for a moment." Gesturing the stranger over to the hearth, the warm embers flickered seemed to invited the stranger to sit by the warm embrace. Heavy foot steps filled the room as the man took his time to warm up, letting his hands reach out towards the fireplace and dry himself.

"Just a moment now. I need to see if I can't find you something to eat... maybe some fish and chips to go with the ale."

Seumas wasn't sure why he was doing this... most of the time he would have been more than happy to tell any ol' bastard to bugger off, but perhaps a sense of pity had struck him with the earlier pleas he heard. In any case, the sheep managed to find some left overs in the fridge to heat up... not the best food in the world, but something was better than nothing. A plate was served to the man once the cloaked man had time to dry off, reaching out with fervor as he ate with voracity.

"Christ, you must have been starving. Or maybe just have a big appetite eh?" All the same, Seumas was slightly cheered up by the enthusiasm from the stranger's silent gratitude, not leaving so much as a single crumb once he finished his food.

The pub owner got out a nice glass for the stranger has he let the pitcher fill from the tap, looking over his shoulder and continuing to engage with the man in conversation. "So... do you mind telling me where you are from?"

"Ireland..." The deep voice seemed clearer than before, though it sounded a little hoarse before the figure coughed to clear his throat. "Ireland. I'm traveling right now actually. There is someone that I have been meaning to meet for a long time."

"Oh, Ireland! It's certainly not too far from here. I've been meaning to take a holiday there myself... but eh. I got too busy keeping my hands here running a pub." Seumas just about finished drawing out the ale into the mug, letting out a yawn in protest from the fatigue of tonight's shift.

"Here you are sir! This is the specialty house brand we make right here! You won't find any better ale in Inverness than here!" Given how slick and polished the bar countered was, the sheep managed to bowl over the mug while the man reached out to catch the handle, the pass just as smooth as the color and quality of the ale.

"Thank you... I know I troubled you more than I should have." Without hesitation, the man went to take a deep slip of the ale, showing a part of his muzzle that was covered in a red beard. The man was an equine, but nothing more could be discerned as the sharp eyes from Seumas tried to see further. To the stranger, the ale was like water, for it gave satisfaction as the man shivered and let throat drenched in the wonderful flavor.

"My travels are rewarded." The slight smile from the horse could be seen as the stallion kept most of his face hidden, giving the empty mug back to the pun owner who was only too happy to whisk it away.

"You're damn right. Not going to let an Irishman travel all the way 'ere just for them to tell me it tastes like horse piss!" A bit of colorful language seemed to liven up the conversation, crass as it might have been. Seumas felt generous as he went to get another mugful of ale, walking around from the counter as he approached the stranger personally. Both men had their own pitcher of ale, the ram raising his glass as if to toast his mysterious guest.

"I'm glad that you're satisfied with the years of hard work getting the right ale blend. To that, we can both drink to, am I right?" The sheep took a small sip to nurse the drink, taking pride in his work. No doubt the stranger was quick to take his glass to sip the drink, though he had not taken a deep drink like the first time when he had set down his unfinished pint to get up and face towards Seumas.

"Thank you for your hospitality... you had given me food and drink even at your inconvenience. I... owe you more than my gratitude Mr. Mackintosh." Generous as those words had been, the ram shook his head and waved his hand in a dismissal, trying to deflect the attention away.

"Think nothing of it. You didn't trouble me at all... it was already late and I'm was pretty much ready to leave. An extra
30 minutes isn't trouble at all." Still holding his mug, the ram took another sip of his drink, letting the flavor wash his mouth while lingering the fuzzy carbonated sensation.

"I see then..." The stranger sounded relieved for a brief moment, though his hands seemed to tighten as if something bothered him.

"I must say this again... I ... I.... owe you much more than my gratitude Mr. Mackintosh. I... owe you an apology." A moment of silence filled the air, the ram rather confused coming from the stranger.

"No really, you don't have to apologize. It's just a gesture of good will —"

Before the man could finish his statement, the horse had finally reached up with his hands to unfurl the hood from over his face. The ram didn't have time to prepare himself for what happened next... to be frank, it was soon a blur when he found himself looking at the stallion before him.

It was the longest moment in the ram's life, as if time slowed down in a singular instant. His face twisted to pure shock and horror as his eyes couldn't believe what he saw before him.

Seumas' vision started to blur even with his wide eyes staring in disbelief. The shock was so bad that the ram didn't even register the mug slipping from his hands. The mug of ale shattered on the floor just as much as the Scotsman's reality.

Seumas' world is soon to be torn asunder after he is visited by the ghost of his past. Lost love had been a terrible scar for the both of them, and yet here now the stallion braves from Ireland to make his way to visit Seumas after many years since they saw each other. What lies ahead of them now that they have crossed paths once more?

Monster Fair had been willing to undertake a huge endeavor to deliver a master piece of epic proportions with this scene I had envisioned between these two characters. The style and atmosphere capture the essence so well, highlighting the character interaction in a powerful manner. All the more reason that I was glad to have commissioned the talented likes of Monster Fair for this incredible picture.