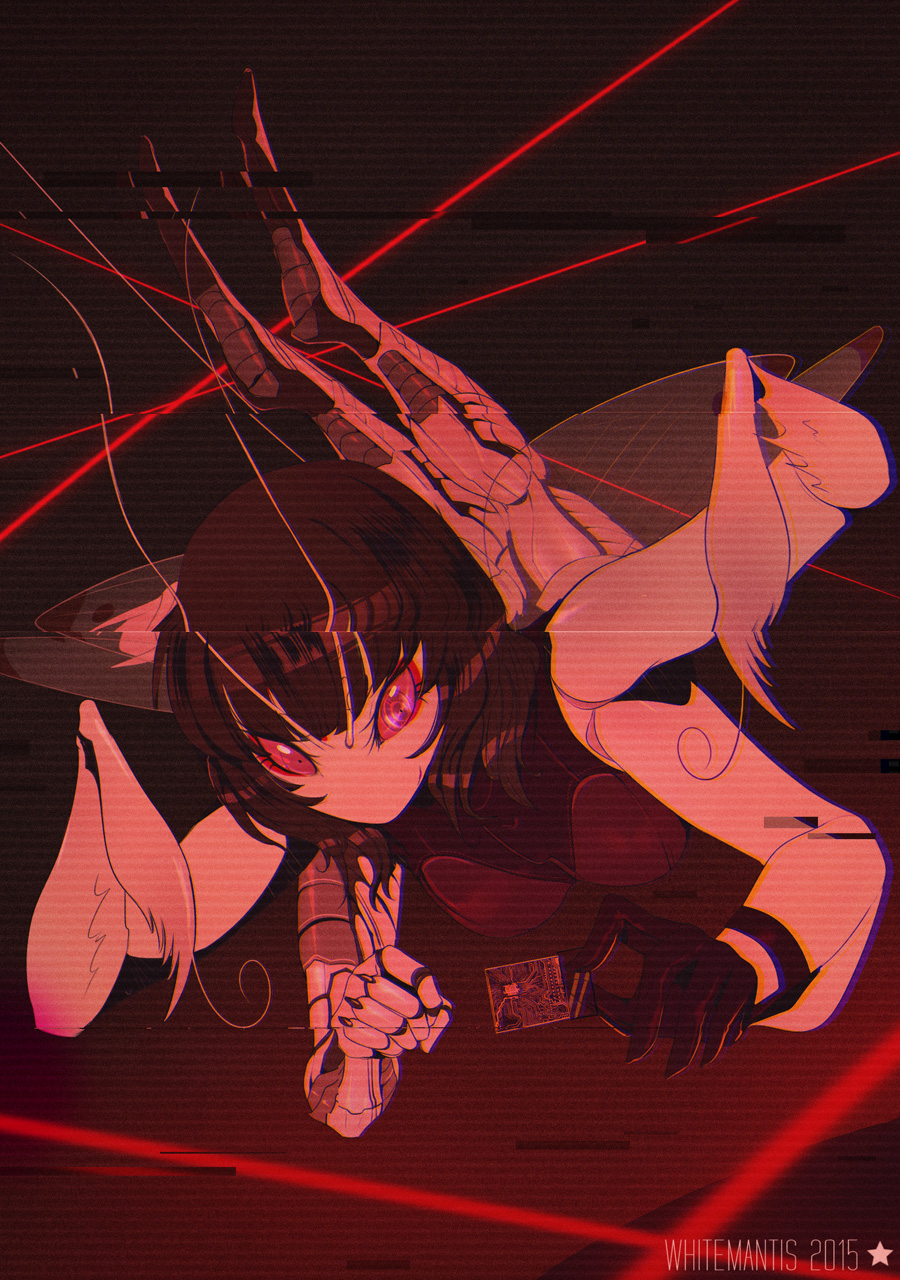 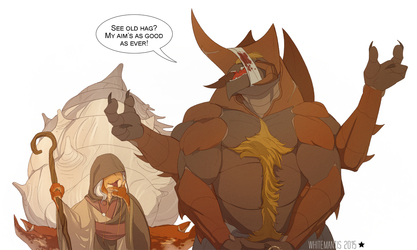 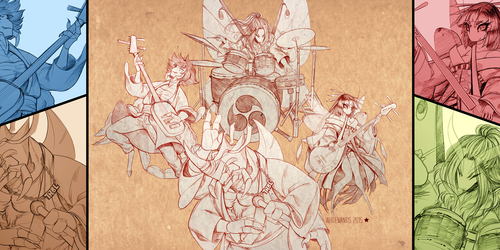 Patreon Reward for Amethystine, who requested "Nae, as a cyber-augmented spy, hanging from a wire, Mission: Impossible 1 style". It was amazing to draw this!

Amethystine also wrote a little story to accompany this piece, which you can read just below!

A reminder! I'm holding an auction for a group image [HERE]! This is your chance to get your character in a full illustration by me AND in a story by Amethystine!

Slowly lowering herself through the gloom of the supposedly secure room toward her objective by way of the merest command-thoughts directed at the winch meters above her, she had a fair amount of time to think.

She thought about the wires attached to the harness, which were in turn held by the winch. Said remote-controlled apparatus was magnetically latched onto the inside of the air duct, within the ceiling of the pitch black room. She reminded herself not to think too hard about the degree of control her internal comms unit afforded her, lest she detach herself from the high-tensile steel cabling supporting her.

Concentrating on the steady, silent descent, she spared a thought to her legs, counterbalancing her. She thought about shifting them the barest amount and fine servo-motors lifted them a fraction of a degree. With this, she rotated within the support upon her hips, and her head dipped into the beginnings of a slow motion forward flip.

She went from horizontal to vertical, like a graceful ballet dancer, in zero-g. Despite this, she knew she was a fair bit heavier than she had been.. before.

Pushing the thoughts of the past from her mind, she reminded herself that she was slimmer, fitter and lighter on her feet, even with the increased mass. More density. Sturdier.

Nothing would ever break her again.

If by some tragedy, something else was broken - it could be replaced, easily.

Through the redundant wired and wireless connection between her and her equipment, her mind commanded the winch to stop. She hung there, utterly motionless; listening.

Rather than her original training's instinctual desire for silence, she was glad to hear what she could now detect. She heard radio chatter, but it was giving the all clear. None of the dozen guards she had tagged for tracking by the pair of off-site thermal imagers knew she was there, if the casual conversations between them she was listening into were any indication.

She was tempted to shut it off, with how it made it feel like her new left antenna tingled. They had told her that was psychosomatic, but she was convinced there was something about the sensor suite within the wispy, thin carbon-fibre, plastic and metal amalgam antenna facsimile aside the true organic model.. or maybe something in the base of it, that sent a shiver through her head when it picked up signals.

Of course she wouldn't deactivate it, though. The moment she did, something important would be said, and she would miss it, she was sure.

No mistakes, not ever again.

Besides, she wouldn't want to miss anything from basecamp, or more importantly, HQ.

The mantis was slightly more tempted to turn off the additional data mode of her left eye, though. The thermo-imagers in nearby buildings, aimed at the target location, 90 degrees apart from one another around the site, to provide real time, three-axis location-data on each heat signature, streamed straight to her eye. Ghostly images of people walked around below her, slightly blurry spectres of yellow, orange and red milled about on their rounds.

So, aside from seeing in the dark as easily as if all the lights were on in the unlit room, she could see through walls, for lack of a better term. Just in this instance, with the support of the imagers. It was distracting, just like the chatter. She had tried shutting just that eye, but the ghosts were still there, displayed over half of her vision, regardless. 'Seeing through walls' meant seeing through her eyelid, as well.

It was a lot to get used to, but she wouldn't trade it for the world.

She took a deep breath and reached out with her natural arm, toward the data-card which was her goal. Luckily, there was no one directly below her to obscure the all-important lift. Her vision narrowed to just her arm, her hand, and the card.

By chance, the various chatter in the building happened to stop.

The girl was assaulted by silence, and by the sight of her untarnished, pale, pure hand.

Memories flooded back to her.

The nightmarish tableau of her hand, stretched above rubble that buried her. Her one uncrushed eye able to see the only other unsullied part of her while she felt blood and pain and failure everywhere else, in the wake of the blast. - Her mission, a disaster, because of no one but her.

The indelible image of her hand, upon the sticky, loose, wobbly, unresponsive control stick of her hand-me-down, hospital-issued wheelchair. Her body - what was left of it - covered in bandages. The glaring lack of legs beyond a tiny amount of thigh and lap was inescapable as she had stared for hours at her hand on the armrest. Every breath bringing a stinging pain where the stitches were, in place of her other arm. Her worse than useless raptorials, in slings, broken, but at least still present.

She had contemplated her untouched left hand for days while she felt shame and regret and bitterness everywhere else, in the wake of her career. - Her life, in ruins, because of her.. and because of her government, the agency that had employed her, tossing her aside like a broken tool, of no more use to those who had wielded it.

The fleeting feeling and flickering perception of two more moments came to her; the evening when the large, scaly, claw-tipped hand had taken hers and shaken it, an introduction - and the morning when she had awoken from her operation and sat up in bed, thanks to there being something to counterbalance her torso.. and had clasped her pale white, undamaged hand with the sleek, glossy perfection of her new one, interlacing her flawlessly matching fingers as gracefully as she ever could have with two natural limbs.

Basecamp called her, then, as if they could see her hesitation, or read her thoughts - and she wasn't sure they actually couldn't do that, with how her electronically integrated her mind was now.

"Problems, Miss?" came the arachnid who was her in-field handler, her antenna buzzing, distractingly. She was thankful for it, as it pulled her from her trauma-filled trance.

With those words, the girl promised herself again, as she had done many times, since recovery, during training; she didn't need anyone's help, not anymore, not after she had been put back together again, fixed.

Another voice, now. Another buzz in her antenna, next to her eye, behind it - through her head. Long-range connection. Headquarters. "I'm sure you'll make me proud, Deare."

The smooth speech soothed her, made her shiver pleasantly rather than being irritated by the tingle running through her, from the comms unit.

It was the boss, her boss. The python who had found her in her deteriorating apartment, in the years-dead shell of her former career as an operative, in her collapsing life, coming to offer her a second chance.

No, that's not what it was. It was not a repeat-attempt at what was before; the older man had spoken of restoration, but what it ended up being, for her, was a rebirth.

Agent Diana Deare smiled to herself and reached out to take the data-card, replying to her saviour. "Yes, Doctor."

'The Good Doctor.' That was the name that came up in her heads-up display, within her eye. She had changed it away from 'Dr. Goode,' as the team had indeed encouraged the use of nicknames. After the other lesser doctors in her life had taken away her limbs [though she didn't blame them entirely, even if she wanted to] and prescribed mind-numbing pills, Dr. Gregory Goode had been.. better, to put it mildly.

As such, the Doctor had begun using the girl's last name if it was the term of affection it sounded like, always phrasing what he said to emphasize the wordplay. It made her warm inside, even in the parts that should have been incapable of it.

He was the one from whom she would accept aid. She was new enough to have not yet needed it, but he would service her augments, maintain her performance, test her limits.. and push her past them.

Ascending with prize in hand, the mantis performed an elegant flip within the harness, between the wires. She could see the laser grid that had activated upon lifting the circuit-lined card from its base, disconnecting it. They all knew that would happen, and her escape route would take her past the building-full of guards she could see and hear rushing upstairs now.

The noise of the alarm faded into the background as the buzz and the voice came again. The Doctor murmured to her: "You're my little pup-pet on a string, Deare. Come home safe to me."

The slender spy chuckled softly at the first part of the snake's statement, and silently vowed to herself that before long, she would have a new nickname: 'Goode Girl.'