Something in his day had changed ; though, he couldn't exactly figure out /when/. Brine's eyebrows furrowed, and his lips pressed down into a very fine line at the sight of, well . . .

Ahti standing at his door with a chipper grin. When had he invited him over again?

" I can't believe you actually got up to answer the door this time!"

"Ahti." The sheer lack of enthusiasm in his tone didn't even cause the other shark to falter. Perhaps he was losing his touch? That was the only thing that made sense to Brine. Or maybe Ahti just had this incessant need to force himself into people's lives until they simply had to contend with his presence. God knew he did it to Brine.

"Mnhn! We were supposed to hang out today, don't you remember?" The reply was /almost/ something that could've passed for a teasing lilt. Definitely not condescending, just a curious barb that was edged out to prod at Brine's otherwise indomintable will. Without much regard for waiting to be invited, Ahti skirted around Brine with a hum. It was simply the way their dynamic worked, and the way that you were /supposed/ to interact with Brine, he had learned. Act first, but give enough space for him to analyze the situation. It was something that many others failed to take into account when otherwise trying to interact with the business-like shark.

He pitied the guy for being related to a deviant, he really did.

" I don't. " Figured. He'd gone out of his way to avoid contacting others for the bettermost part of the week. Another reason why Ahti was bothering him to high hell and back, it seemed. That part of his personality really pushed Ahti into /pushing/ himself into Brine's life, though . . . he couldn't complain. The company always made for something pleasant whenver Kell was off doing long term assignments. " I've been busy planning a few things for work. " He immediately regretted saying something related to work once the other fish's blue irises met his own with no small amount of intensity. Being intimidated was an impossibility for him, but that look in Ahti's eye never led to anything /good/ for Brine.

So now he had a stubborn courier dragging him into the kitchen so they could do something /other/ than talk about work.

"So when are you and Kell gonna tie the knot?"

The inquiry caused Brine's expression to lock up in a firm scowl - though, it was brief in comparison to the light tint of red that washed over his face. "It's not like that." It was something that he believed was hinged entirely on friendship, nothing more, nothing less. Describing his feelings for the other shark was too complex for his own good, and if Brine hated one thing, it was complexity. Already he could feel the starts of exasperation forming in the pit of his gut. Why in the name of . . . everything did Ahti have to throw him off guard with the oddest questions?!

"It's not like that?" Ahti parrots, and Brine didn't even believe himself once the tone was thrown back at him. The ever-present chipper grin on the smaller fish's face only seemed to take on a fiercer light after he slid over a package of meat to the assassin. Ah, right, they were supposed to cook. "Are you sure it's not like /that/? Because whenever he comes up, you get all red in the face like, well that ~ And I've seen him go cherry red before. Does his dick get r-" Brine's fierce glare could sear through metal. But that didn't stop Ahti from finishing his sentence. "-ed? Or is that something that absolutely private?"

The Courier really needed to learn about proper etiquitte sometimes, Brine reminded himself internally. He looked completely unbothered with how loud the question reverberated in the moderately sized apartment. Ahti had never been really good at reading the mood anyways - he preferred to /set his own/, instead.

"It's not something that's your concern."

"I'll tell you about Kypari."

Wait wait. His mind wasn't supposed to be going /there/. What was he /doing/? Talking about his sex-life to someone that would probably go twitter it to his boss if he got the opportunity to! Excellent blackmail material, Brine knew, but there was no way in hell he was going to give out something without anything juicy in return. This was why he really needed to get his priorities straight, and soon.

" . . . He has a big dick." Ahti offered, completely unaware of the shade of scarlet that Brine's features took on. All well, they both had more than enough time to slice up their respective ingredients - beef for Brine and onion for Ahti.

"Yep! Huge. /Huge/. At first I was kinda surprised, because y'know, I didn't think he'd be packing that much heat! But enough about that - I want something in return."

"Remember when I couldn't come over for a few days because I pulled a muscle? "

There was a pregnant pause that suspended between the both of them, before Ahti broke down in a fit of giggles. "A-are you serious?! I thought you'd be joking, but that look on your face right now!" True to his word, Brine's earfins were angled back and his cheeks were stained a dark shade of red that showed up on his dark gray flesh easily. It was a pity that Ahti didn't know how to take 'no' for an answer either. He'd get the answer out of Brine whether he wanted to share it or not, which only served to put a strong bitter taste into his mouth that'd refuse to be washed out.

"Yes." Was Brine's flippant response, arms crossing over his chest even as beef and onion were tossed into a wok to carmelize. When had they started they pulled that out? He was getting too damn distracted.

"So what about your first time?"

"You make it sound like a mission. Did you guys do it on the beach? Under the rain, where you looked into one another's eyes and proclaimed love for one another?" Brine had a feeling that Ahti was either a good spy, or he read too many shark romance novels. Brine could read between the lines easily ; he wanted to know a bit /more/ about Brine than what he'd willingly show. It was understandable, well and truly, for someone to want to pitch a sell like that. And what better way to understand someone's nuances through their sex life?

They sat in silence for a few minutes, listening to the sounds of meat and vegetables cooking together.

" You didn't tell me about Kypari. " Brine points out. It was true, Ahti was digging for all the information he could on his and Keller's relationship, but hadn't offered so much of the slightest bit of insight on how Kypari may have acted towards him. Honestly, Brine wasn't especially interested in the lemon shark beyond what little he had to offer in the aesthetics department. Still . . . he was a man of his word. Fair trade and all.

" I was expecting you to do the talking, you always do. " Another point. Brine mentally jotted down that one in his favour.

" It's uh, complex. Just sort of a fling thing. " His voice seemed to lack it's normal enthusiasm, which caught the hybrid's attention like a fly towards honey. Brine knew Ahti as well as Ahti knew him -- or rather, he knew his nuances as well as Ahti knew his. 'Just a fling' didn't really draw forward that type of reaction. "It'd never really work out. He's my boss and all, and sometimes he has needs. It's mutually beneficial, understandable, right?"

'Yes', Brine wanted to say. 'very'. But his sullen look didn't so much as shift when the air became tense. His eyes soften, certainly, but he doesn't show anything beyond that. ". . . did you bring the rice?" This was the only thing Brine could ask, for both their sakes. After all, if he offered that, then they both could get off the topic of their respective sex lives.

"No . . . did you tell Kell that you're waiting on him to shoot the question?" 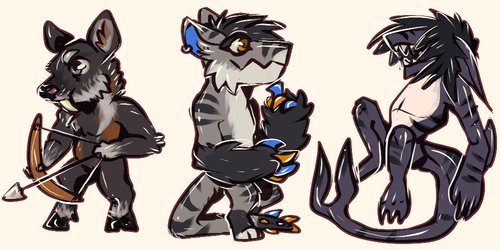 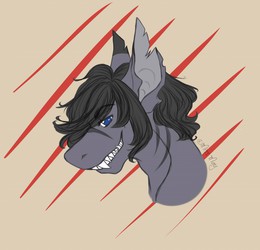 In which Brine and Ahti talk about boys. I just wanted to do something to explore the dynamic between the chatterbox and not-so-chatterbox, really. Note to self, practice more humour and dialogue - it's actually kinda fun--