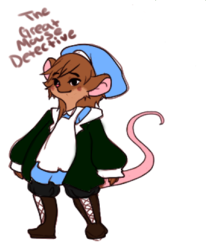 Based on, well, Treasure Planet! One of those things that have a lack of love. Geeze, we need more things like this - erhm. Anyways, somewhere along the line, Space Pirates /had/ to be a thing. So, we decided to go with that.

Space Pirates - which leads to a case of misidentification and the realization that, hey, while being dressed as a pirate is cool, it's not cool when you wake up in the brig, or . . . whatever. Hella cool clothes though tbh.