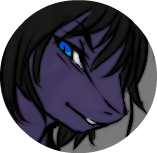 As the moon ascended past the horizon, blanketing the world in the cool shroud of platinum light, Brine came upon the metalic walls of Sector 8's military base. Normally, he would resort to tactics that were as cloak and dagger one would expect from an Assassin, but there was a limited time for him to get in, knock out the target, and get out - some sacrifices had to be made, and in this case, the sacrifice was stealth in the name of quick, efficient brutality.

There were two guards patrolling the only entrance to the walled off courtyard of the base. Brine took a few seconds to analyze their movements - after all, it would be for the best if he wasn't stuck with someone that had enough experience to respond faster than he could draw a knife. They were . . . surprisingly lacking in fluidity ; their walk was stiff, expended far too much energy, and they probably only had basic weapon training if the clumsy manner in which they held their weapons told him anything. In the grand scheme of things, they were merely cannon fodder. Statistics when fatalities were counted, and nothing more.

They would not be missed, but they had information. Information he could put to use to glean a deeper understanding of the base's layout.

The Assassin searched the walls of the base with a piercing gaze, sorting out the hidden cameras and security systems with a critical eye. To the standard eye, they would be difficult to pinpoint, but to Brine, a trained Assassin, noticing the slight glimmer of light from the reflective lense was childs play once he managed to take note of the pattern at which they moved.

There'd be no point in attempting a full blown run and gun - he'd probably set off a few alarms doing so anyways.

And here he thought he'd have an easy job for once in his life, slim chance that it was. No blind spots, disguises wouldn't work ( he hadn't thought of replicating their uniforms ) and the Kharybdis system could not interface with security systems at such a far distance. So, it was with a sigh of resignation that he kicked off with the heel of his foot, blurring into motion with feather light touches that barely touched upon the pavement beneath his feet.

It only took a second to retrieve a knife from the holster on his hip and sling it towards one of the guards. The silent /squelch/ of metal sinking through flesh was the only sign that he had even been near. Like a leaf in the wind, he removed the knife before the body hit the floor and avoided the spray of blood that was short to follow from the graceful motion. Not a single sign that the killer had even been there beyond the missing guard and the dead body. Though, really, the poor fellow tried to strike him back, Brine wasted little time in wrenching the lad's wrist to the side until bone ground against bone and /snapped/ through flesh.

He couldn't do with someone that was too willing to hit back, after all.

With practiced ease, he liberated the guard of his armour while still holding him captive. Brine didn't take his time, of course, immediately thereafter questioning the ( now unhelmeted ) feline about the layout of the base with such an indifferent expression on his face that you may as well believed that he was inquiring about the weather. Hands frequently steered towards his weapons whenever he wouldn't talk, as if to intimidate him further than he had already and force the answers out when he could. A basic scare tactic that frightened the 20-something year old to no end, it seemed.

After gathering the information that he required, the man began begging for his life, telling Brine that he had a wife - a daughter, anything to keep the shark from killing him in cold blood as he had done to his coworker under the presumption that he would empathize with his plight and let him go free.

The shark leant down to whisper in his triangular ears with complete and total confidence, causing his victim to whimper in completely paralyzing fear. Such a fleeting thing that you'd be hard pressed to catch it even if he spoke his loudest. His voice /oozed/ with callousness, with the brutality that he had both endured and shared far too many times to count for his own good.

A twist of the knife in his hand silenced the man, his heart stopped by the cool bite of the blade entering flesh seamlessly. The man's mind screamed that he wasn't /supposed to die like this/, that he was promised an honorable death, something that others would /respect/ him for, not something so . . . blase. Casual. As the last vestiges of his conscious mind faded, he was overtaken with the sight of Brine's lips curling into a smile that was as cold as it was consuming. And for a moment, just for a moment . . . he pitied the shark.

Brine made a point of withdrawing his knife as fluidly as possible. He had a long night ahead of him. 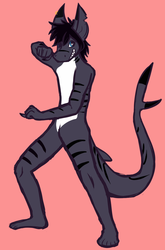 Just a snippet of how I envisioned Brine at work when he did the whole . .. killing thing.