Arm in arm, a couple strolled down illuminated streets at a pace that proved relatively sedate for a set of tourists. Many would assume that they were natives with how casually they were striding, claws 'tak. tak, tak-ing ' against pavement yet hardly something that was easily separated from the cacophony of others around them. Festivities were in the air and it showed- not only through the lighting, but the sights, the scents, and the overall atmosphere was crackling with excitement. And although they contributed to the scene, Brine couldn't help but feel yet another pang of annoyance this fine evening at walking through a crowd that would've, at one point rejected him for where he had been at life.

It wasn't very important now of course, but he did feel a drop of apprehension expand into further in his gullet- at least until Keller gave a quick squeeze of the arm and drew him in a bit closer than they were before. "Y'look upset. Don't tell me that you didn't have fun, Brine. Going by your smile up until now..." The far taller shark trailed off with a hum at the back of his throat, mind quickly going over the events of the evening- as if assessing just what could've gone wrong to cause whatever shift in demeanor Brine may have held.

Thus far they had gotten a new fish aptly named . . . Fishy for one reason or another (probably because they were both bad with names) that was subsequently returned to the hotel room they had rented out. Not to go on and forget about the fact that they had both gotten a fair amount of cherry blossom petals in their hair from the soft breeze that danced through the scenery every so often. Leave it to Keller to remain adamant about dragging Brine out of the room no matter how many dirty looks he got from 'Leaving fishy by himself'.

And then... they had gotten a few snacks, Taiyaki for his partner, and grilled squid for him. Kind of an odd taste, but not overly so, he decided. After all, he /was/ a predator of the sea.Although tempted to exit the armlock and walk with a possessive hand on Brine's hip, Kell refrained for the time being. Since arriving in Japan, it seemed as if Brine's mood found itself in conflict- that carefully crafted mask of his ever so steadily slipping and leaving behind nothing but a nervous guy who didn't know what to really do with himself in the long run. It was unlike him, so wasn't it Keller's prerogative to be concerned? Molten eyes met ice blue, before Brine's gaze fell elsewhere for the sake of avoiding direct eye-contact. "It's been enjoyable so far. Thank you for the night..." He murmured under his breath with the smallest of smiles crossing his features, only for it to be accentuated by a brief blush rolling across his muzzle at the kiss to his blackened eartip.

"It was no problem." A pleasant rumble that expressed it a genuine thought cause Brine to glance back up again. Was it really fair for them to come out to a festival without going for any games?Brine's teeth dug into the crunchy shell of Taiyaki in an absentminded manner which brought with it, a surprising amount of custard filling- "Troublesome..." The sharp note under his breath was met with a chortle of amusement at the back of Keller's throat which, quite naturally elicited a curious expression from the shorter of the pair. Even if he had gotten a bit of custard on his cheeks, it'd probably be taken care of sooner rather than later

. "Y'should still stop looking so grumpy, after all..." His hand /did/ eventually find itself on Brine's hip, just as it /did/ find itself giving a quick little squeeze for the younger shark to flick his tail in obvious... frustration? Nope, that was never quite it with the assassin. Just embarrassed over the situation.and that'd fade once his eyes landed on a mask vendor. "Do you want one oor-" Keller hardly got to finish his sentence before Brine slipped out of his hold and dragged him over. Fingers interwoven with his the entire while and eyes scrutinizing the masks with an expression of extreme concentration. Silly, childish. That was the best way to describe how the dark haired shark looked to the bluenette, but that was short lived once Brine turned around and clasped his hands together.

It was always troublesome to look up towards Keller, but for once Brine felt his lips curling into a smile towards the other aquatic. An awkward thing that only made Brine look geekier than he did already (he hadn't bothered to remove his glasses, had he?). In the thresher's eyes though, the guy couldn't have looked any cuter even if he tried. What? He had ended up slipping into a female kimono instead of something a bit more... masculine, but for some reason it fit Brine. Navy blue that gradually lightened to sky blue at the sleeves secured with a matching obi? Overall it simply painted a picture of waves on a dark night, but that was easily ignored when his attention was pulled back over to somewhat impatient looking Brine. One foot tapping against the ground and Taiyaki held in his hand much like a fan, beckoning Keller forward with a surprising amount of humour showing in Brine's gaze.

To Brine it was something new, something that he had always wanted to do as a child but had been buried in the deeper parts of his mind once he had been spirited away after what felt like... years for him. "The foxes." After a few moments of contemplation, the hybrid had spoken up. What about them? 'Course Brine refrained the urge to roll his eyes and simply nudged his head towards the ornately crafted masks hanging off as wares. They weren't cheap, course they weren't, but this was supposed to be a light spirited night, not one of debating on how easy it'd be to steal something here or there. But all what'd take is to slip something into the large sleeve of his hakama, nothing too serious and it wasn't like they'd be missed anyways, right?

But there the younger was, chattering with the vendor with the masks he had wanted in hand in surprisingly fluent Japanese. Had Brine even mentioned that he was /from/ Japan anyhow? "Nmnph..." Blue eyes flicked over to Keller's form when he gave that soft grunt. The earlier judgement of his partner looking good was easily reciprocated by Brine- a solid white kimono top secured at the waist with a pair of black hakama? It was only made better (and somewhat cuter) by the fact that Keller refused to remove his goggles, and despite the fact that Brine wanted to say something about it at first.

"It is getting late, isn't it?" It was an obviously rhetorical question that was answered regardless. "It is." He wanted to be a little bit of smartass there, so Keller did what he did best and used his sharp tongue. An easy task to get a rise from the shorter shark. Keller wasn't outwardly taunting or anything, heavens no! But just like that, both males found themselves interwoven in one another's grasp. Brine with the intent to go home and Keller with another plan in mind altogether.

The thresher was slowly but steadily working them away from the festivities and towards an offbeat path that he had looked into in his spare time after running the area for a little while. Maybe it was stupid to do, but he wasn't going to judge himself over it just yet. Word of the mouth led him down the path, and Brine, being... well, himself decided to follow without too much of a show of disdain on his own part.A blatant sign of trust over Keller? Certainly so. But he wasn't going to make a huge deal out of it in the long run. "Where are we going?" Brine's inquiry caused Keller's earfins to give a sharp perk and an impish grin to vine its way onto his features. "You'll see." Responding with that all-too pleased tone of his made the young Assassin a bit more hesitant, and that was only bolstered once they began climbing a relatively steep hill.

Not that either male happened to be out of shape- heavens no, that would be outright silly of them to just up and retreat just like that. It'd take ten minutes, or maybe twenty, but once they did..."Huh... it's..." "Beautiful right?" Keller finished the sentence before his partner could even consider saying anything, and true to his words they had indeed come across a lovely sight. A sakura tree in full bloom- considering that they had the fortune of coming under a full moon? Well, it only made the moment as special as they'd allow it to be. "I wanted to see it, and I thought it'd be better if we saw it together." Keller's cheesy grin was interrupted by Brine punching him on the shoulder lightly with naught but a fleeting smile crossing his otherwise pensive features.

"Keller..." His voice was light, carried away in the wind when he spoke his partner's name, yet just as easily read from his lips. If not from practice, then from the fact that the shorter shark turned to meet eyes with Keller himself. "Mnph?" Earfins stood erect, even as both males came to take a seat at the trunk of the tree. The sudden weight on Keller's lap told him that Brine had rested either himself, or his head there. A quick glance down allowed molten gold to meet ice blue once again, for god knew how many times this evening.Both felt like nothing really mattered then, just indulging in the pause in time before rose his head to peck Keller on the cheek. A quick turn on Keller's part allowed their lips to meet in a gentle embrace before the smaller of the two returned his head to the other's lap.

"I-" A hesitant pause on Brine's part, before he nuzzled into his partner's stomach. "I love you. Thank you for the night." A pregnant pause, before Keller responded in a tone just as soft. "... Anytime. And Bri- Ren." He never used Brine's real name unless it was important right? It was an automatic attention grabber."I love y'too." A tousle of ebon locks before the thresher leaned back in the hopes of reclining further still ; maybe it was an odd way to end the night, but it was an enjoyable night nonetheless... 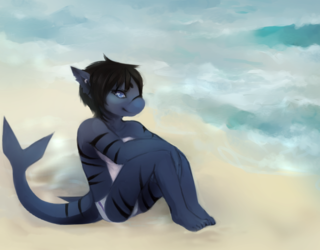 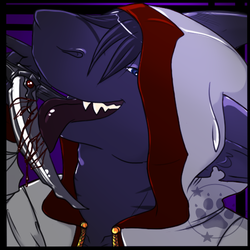 A quick snippet given to my friend as a gift ; idle musing leads to characterizations and randomized dates - the luck of a draw and all that jazz. Nothing dirty though, I have such bad confidence at writing smut that it's something that I purposefully avoid. Anywho, if I got any facts wrong then I would appreciate being told - it was written at like 3 AM for reasons- :u