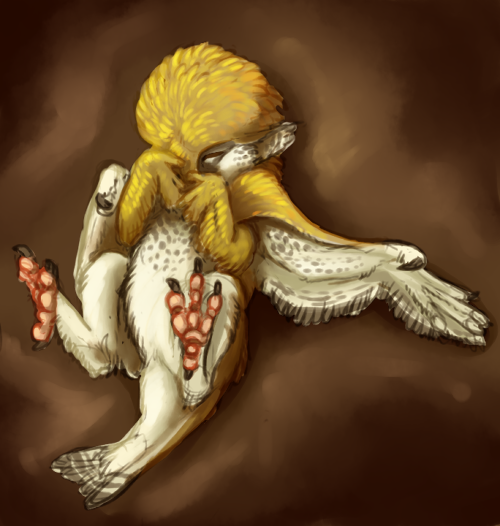 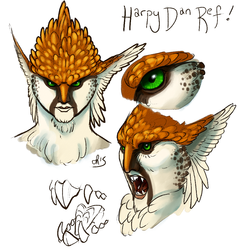 This version of Harpy I accidentally cooked up happen to be mammal-avian/mammavian sort of things that are very birdylike but they bear live young and nurse them.

This is a baby Golden Harpy, [Harpastriga aureus] who will grow up and be known as Aidan/Dan/Dilly. Yes it's Aidan as a Harpy SHUSH. Their baby colours are usually browner and much more cryptic but I sucked and wanted to use adult colouration.

Like human and raptor babies Harpy pups are very altricial (aka they basically rely on their parents for everything) for the first couple of months, requiring their parents to deliver body heat and food in the form of milk. Once their eyes are properly open and they're a little more mobile they usually start wiggling around and flopping all over the place when their parents are around. It takes them a few months to transition onto solids/regurgitated food and then actual food. Usually they learn to fly/glide before they can properly walk upright, though they can waddle/inch around on branches/perch.

Harpies are often caught and kept as pets, guards, show-pieces or a supply of magic-imbued shiny feathers. Dan is a particularly small specimen of Golden Harpy who, while rather pretty, won't make the grand golden creatures desired. So she'll probably end up being used to brood clutches and foster babies.