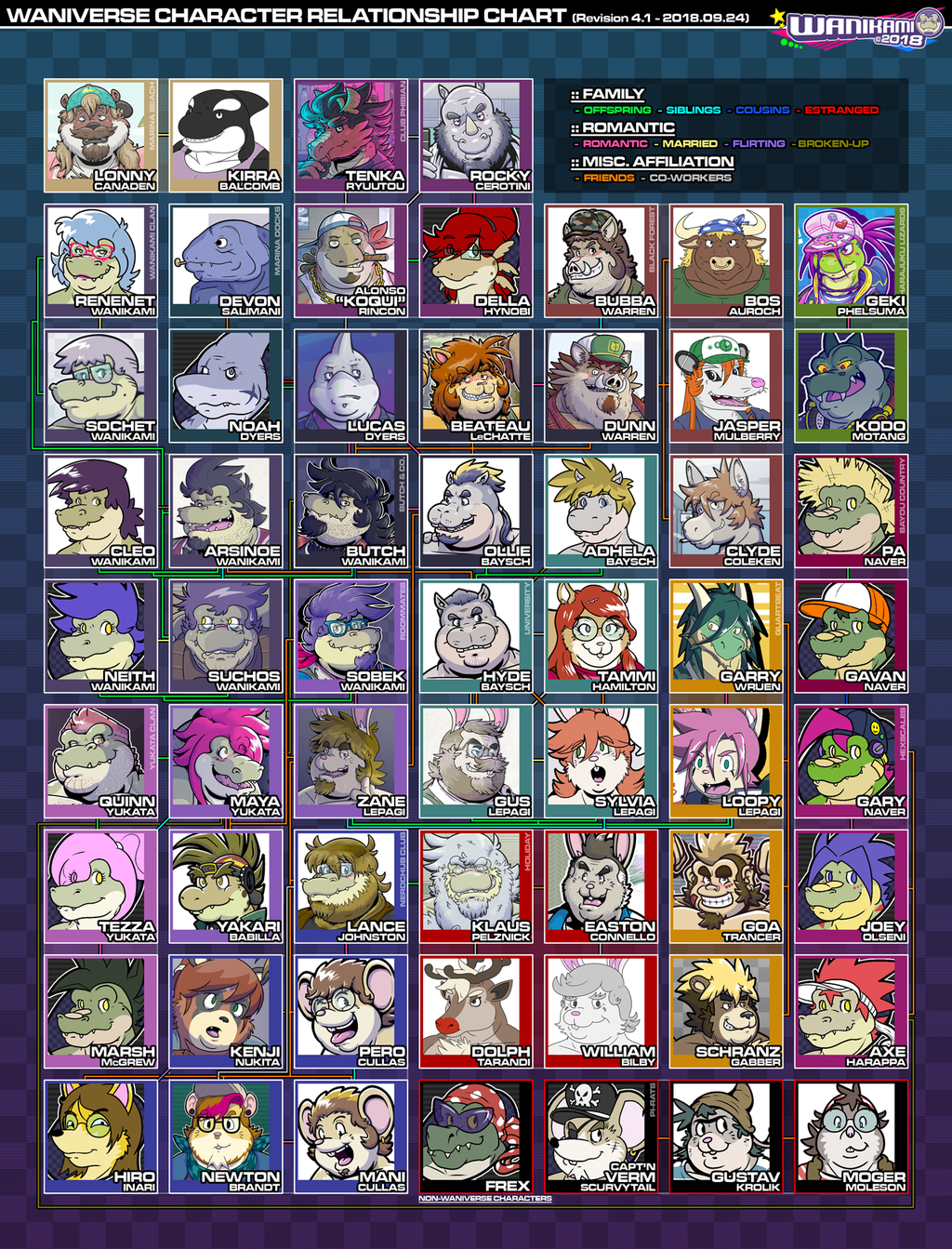 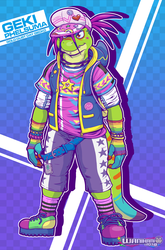 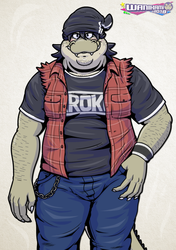 It's been five years since my last character chart and ten years since my very first chart, so I've been making this new one, with all the new characters that have been added to the Waniverse since 2013. I also added last names to characters who previously didn't have one. Over the years, these characters developed, evolved, and changed drastically. Some ideas were dropped while others were expanded on. Here's a quick updated list of all of them, including ten brand new characters being formally introduced on FA for the first time on the chart:

Butch & Co:
Butch Wanikami: (Black-Haired Krokodyle) Sobek’s younger cousin; was the linebacker for the university’s football team; partying fratboy
Dunn Warner: (Boar) Born and grew up in Black Forest, Arkansas. Was the Center for the university’s football team; loves cooking and barbecuing, smoking hickory-flavored cigars.
Beateau LeChatte: (Cat) Dunn’s stoner, cajun boyfriend; Laid-back, mellow music aficionado; hangs out at record stores collecting vintage LPs
Oliver "Ollie" Baysch: (Hippo) Hyde’s son and Butch’s boyfriend; was in the football team while in college; lived with his mother after the divorce; wanted his father’s approval by joining the football team in college
Lucas Dyers: (Shark) Butch’s boyfriend; former football player; traveled the country for 7 years after graduation; now a bouncer at Club Phibian; is a total pervert, had a bad relationship with his dad and doesn’t talk about it, has a thing for older males

Club Phibian:
Alonso "Ko-Qui" Rincon: (Coqui Frog) Popular local rapper; owns the Club Phibian nightclub; known in certain circles to be a total player and horndog.
Della Hynobi: (Salamander) Superfan of Koqui and his music, later finds out through her mother that Koqui is actually her father
Tenka Ryuutou: (Eastern Dragon) Bartender at Club Phibian. very cosmopolitan and travels the world on his off-time. Oftens chats it up with the patrons, offering advice and encouragement
Rocky Cerotini: (Rhino) Bouncer at Club Phibian; Straight; takes his work seriously; does not approve of KoQui and Lucas's perverted tendencies.

Marina Docks:
Noah Dyers: (Shark) Lucas's estranged father; an abusive alcoholic that didn't approve of Lucas being gay; this friction has led to his son not speaking to him for years.
Devon Salimani: (Coelacanth) Noah Dyers's drinking buddy; often let Lucas sleep over during fights with his dad whie in high school; secretly bisexual

Pi-Rats:
Captain Verm Scurvytail: (Rat) Captain of a band of gay pirates; often goes about wearing nothing but a thong
Gustav Krolik: (Rabbit) Soft-spoken strongman with a heavy Polish accent, has encounters with everyone on the ship, but is oblivious to Scurvytail's advances
Moger Moleson: (Mole) ~NEW CHARACTER INTRODUCTION~ Newest addition to the pirate crew, very shy and is surprised by the open gayness of the crew.

Others:
Frex (Saurian) A bodybuilder/exhibitionist