Zeva Altria "Then and Now" (Commission) by Unownace 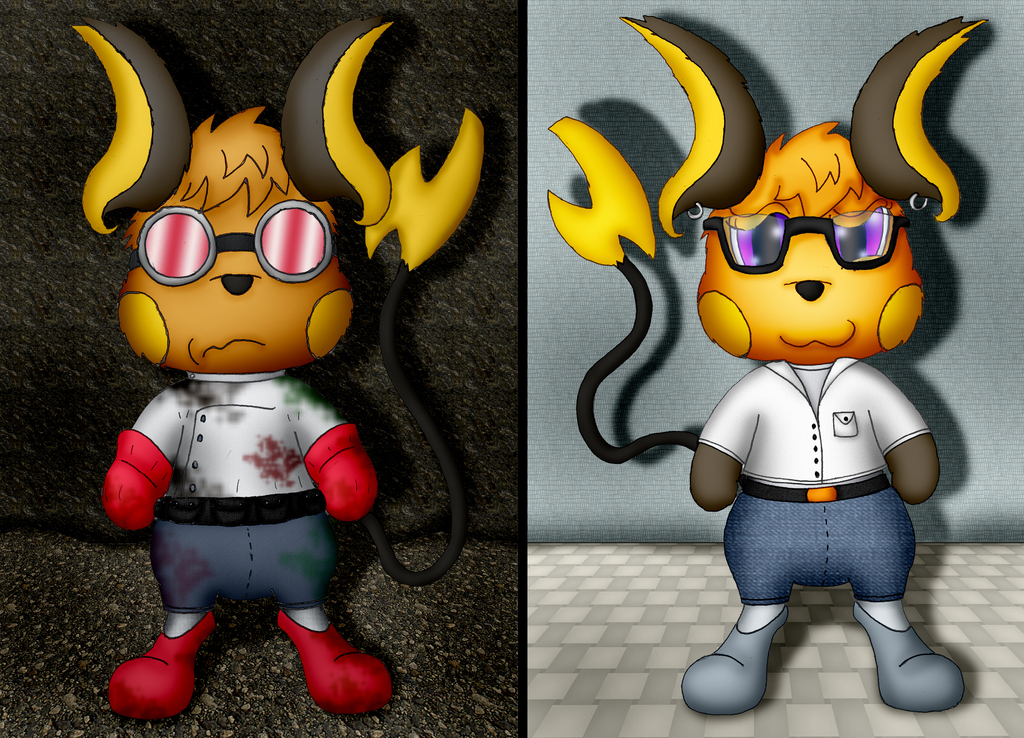 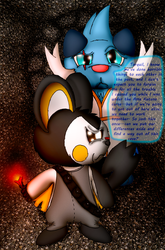 Zeva Altria "Then and Now" (Commission)

A PayPal commission for Shadowlord90 (https://www.weasyl.com/~shadowlord90), featuring his Raichu scientist OC, "Zeva Altria," depicted as she was when she was an "Arch 'Mon" living underground, concocting villainous schemes against the surface world, contrasted with her current, more cheerful and compassionate self on the right. It would be too difficult to explain what "Arch 'Mons" are in my own words, so I'll just copy and past Shadowlord90's words here:

Zeva did originally come from the Arch mons (She was kidnapped from the surface, and educated in their ways to hate the surface; before she took a rock to the head and forgot entirely about her heritage); leading to her current situation, where she is super intelligent; but doesn't really know where she got her knowledge. She just kinda rolls with it.

See, Zeva's mission when she was younger was to go up to the surface and gather information about the Surface Mons so the Arch Mons could launch an attack; but Zeva surfaced around the same time as when Ubel was digging for some information about the past. During one of the detonations; Zeva was on her way out and she was hit with the rubble; Ubel dug her out, but she lost memories of the Underground, only retaining her intense knowledge. So Ubel took her in, and that's how she became the Raichu she is today.

In the case of the Arch Mons, they were superior in most ways to the others; Sigilists, Elementalists and Subsume; primarily in their intelligence. While the others were still learning how to create basic structures and such; the Arch Mons were already long in development of more advanced things. They were however, also a highly religious group; praying to the sun as their lord, and believing it would always protect them. This naturally led to a lot of jealousy and hatred for them; at least from the Elementalist and Sigilist side; the Subsumes honestly didn't care. But if one side tried to take on the Arch Mons, they didn't stand a chance.

Naturally; this led to both Sigilist and Elementalists working together to overtake the Arch Mons, who while they fought strongly; were overtaken by the sheer desperation and ferocity that the other two sides showed. The Arch Mons retreated Underground, figuring they could hide it out; but they underestimated the anger of the Sigilists and Elementalists; who sought out nearly every entrance to the underground they could find; and closed them all off with rockslides trapping the Arch Mons underground in darkness. Without the sun; the Arch Mons eventually found themselves coming down with a strange disease which caused them to go mad and turn highly aggressive. To make matters worse; contact with an infected mon would infect the one touched as well. Which caused the Arch Mons to panic. It turns out that the cause of the infection was due to the lack of their sun exposure (without their lord protecting them, they had nothing of value).

They only survived by finding a large enough chamber, and constructing a city; one where they built an artificial sun using their wisest intellects; and this alone not only kept the infected out (since infected mons hated the light); but also supplied them with a supplement to prevent them from going mad. Unfortunately, in this condition; a Tyrant would rise up and take control of the Arch Mons, focusing entirely on one goal; revenge.

They knew they couldn't just go back up; since they had been so soundly defeated before; so instead, their plan was to even the odds. They begin training some of their best mons to go to the surface and kidnap children to be brought down. These children were then raised, and educated to hate the surface; basically giving them a loyal generation of mons who despised the surface. Zeva was one of these mons.

In my canon (Universe PK-37) however...due to the whole "humans going extinct due to a mutated form of Pokérus" thing, the "Arch Mons" were instead mostly comprised of some of the 1% of humans that survived the plague by being transformed into Pokémon (a rare effect of R-Pokérus). They retained their memories and intelligence, but with dwindled numbers and unfamiliarity with their new forms, the Pokémon, wild and trained, fed up with the dominance humans had over them for eons, drove them underground. Same conclusion, different origin.

Also they may or may not worship an undetonated nuclear bomb. https://www.youtube.com/watch?v=Cl14xh4GSrc