Service with a Smile (Origin Story for Ms. Emoji) by Unownace (critique requested) 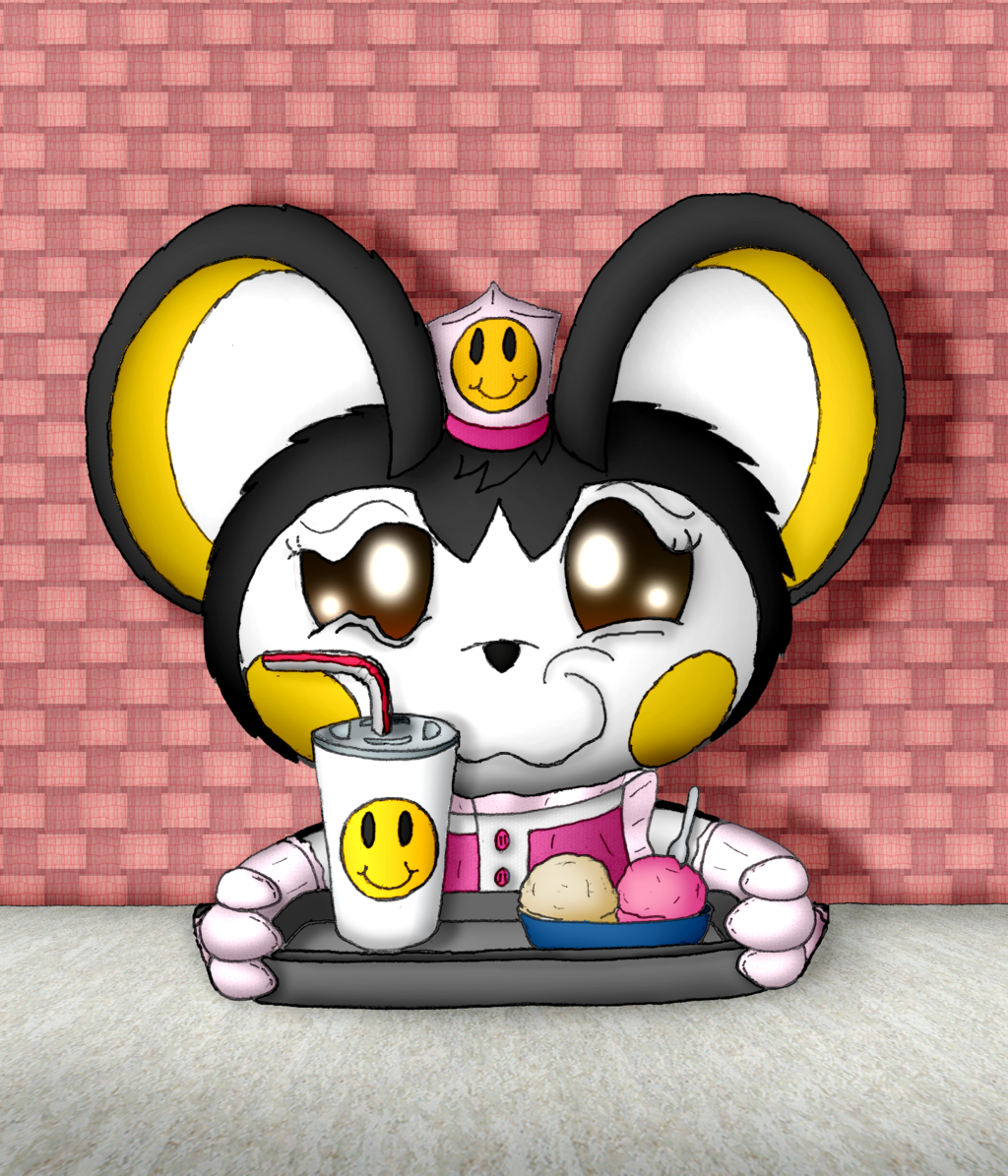 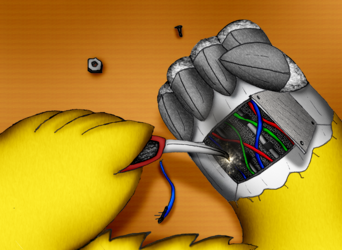 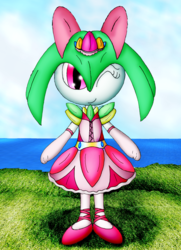 "Service with a smile is what we offer! A happy server makes a happy customer!"

That's what she used to say. Every minute of every week day for three long years. "You have to put on your best smile for the customers," her boss would say, "Or else you lose your paycheck for this month, I say!"

A long time ago, when she was just a girl...orphaned, no family history to speak of... Found abandoned as an egg she was, and thrust into the nearest orphanage. Many of such places she lived in, growing up in places for children without a home, with no one to love, no one who cared. Places where the unwanted and forgotten were left to weep.

One place in particular housed a very mean crowd. The children there, they did not like her. Spit on her, call her names, beat her up they did. Sometimes, when those mean, mean children felt particularly cruel, they'd ties her up, gag her and blindfold her with tape, cheekily drawing a cartoony smile where her face was covered. They'd sometimes dangle her from the ceiling, and knock her about the room with batons like a piñata. Other times they'd take turns playing "pin the tail on the squirrel"...with which they used real pins.

Her adult life did not much improve. In a tiny, rundown apartment she did live, surrounded by every so noisy neighbours and an even noisier landlord.

On minimum wage she did work, at an ice cream parlor aptly named "Smilies." It was here she recited her "motto." Her salute to the system. The oath to feign happiness, when she rarely felt it true.

It was one fateful night, when drive home from working late, ever so tired she was that fall asleep at the wheel she did. It was moments before she founder herself in the river, trapped in her car and sinking deep. Her air had run out, her body weak...she was convinced her time was up.

It was then, in the darkest, coldest depth...when a glimmer of light approached.

Rescued she'd been, by a handsome Pikachu named Ace. He dragged her from her car, swam her to the surface and gave her CPR. Before she'd even the chance to thank her savior, the first Pokémon to ever show her a shred of care...he left, claiming he had other important work to do.

He'd called a cab for her to take her home, where she quickly changed and went to bed. Her thoughts did not let her rest however...they dwelled on the heroic Pikachu who dived into the river to save a random stranger... Deep down in her tummy, she knew there was something more. Fate had to be pulling them together, for never had she felt so valued by any creature.

After days of pondering, ruminating, and eventually planning...she made her move.

Risked everything, she did, to find the man who'd saved her life. Took time off work without pay, bought herself an elegant dress, a fresh bouquet of flowers and a pricy train ticket that would take her half way across the region to where her savior lived. Put her nearly in dept it would, but she cared not at the time. All was worth it to see his face once again.

Walked half way up the steps to the guild where he worked she did, nearly tripped in the high heel shoes I wore. Hours she waited before he came, climbing the steps with determination.

Approached him she did, offered her paw. Thanked him for her rescue and asked if maybe he wanted a drink, perhaps a bowl of ice cream for two.

"Do I know you?" he asked. He didn't even remember her. "Sorry but I've got work to do. I save Pokémon every day, it's my job. If I stopped to chat with every Pokémon I meet I'd never get anything done."

Storm off he did, right past her and up into the guild...but not alone. Bounding right behind him was an excited Eevee girl, who gleamed at him with sparkly eyes in a way only a lover would.

Defeated she was. Utterly distraught. All her spending and planning for not. Went back home she did, not a word spoke. The next morning at work, she failed to recite the chant. When asked what was wrong, into the corner she ran, and wept she did. Wept like she'd not since she was a kid.

Her boss, ever the two-faced soul, fired her for this, and sent her home. Not sympathetic were her coworkers either; laughed at her they did for thinking she had a shot with the renowned Ace Spade.

It was here that her sad little mind snapped. She wrecked her apartment and smashed every window. Flipped over the coach and set her trash can ablaze.

Her land lord quite understandably did not take kindly to this, and evicted her on the spot, leaving her nothing but the filthy, tattered work uniform from the job she no longer had on her back.

With no job, home, car or belongings of any kind, she had nothing left to lose. Only one thing occupied her mind now, and that was to win the affection of the Exploration leader Pikachu who rejected her not days ago.

She hitched a ride back to his home town, and many a scheme did she concoct. With each plan foiled, her frustration only grew. She decided her only chance was to eliminate her biggest obstacle; the Eevee with eyes of affection on her beloved.

She'd captured the normal type, tied her up tight. Planned to drop her in the ocean with a weight so her body no one would ever find.

Stopped she was however, by none other than Ace himself. Angry he was at her, and all to say he had was this. "Emily the Emolga, you are hereby under arrest. I'm taking you to a place where hopefully they can fix whatever's broken in your head."

So for weeks she sat, in a dark padded cell. Her arms strapped up tight in a hospital straitjacket and her mouth muzzled shut. The only company she got were from the doctors to give her food or injected her with medicine.

Her life from then forward seemed set in place, bonds and cages with no escape. Then one strange night, noise she heard. Banging, screaming, slashing and alarms.

Afraid for her life, since she knew something was wrong...she cowered helplessly in her cell, and hoped to not be heard.

But heard she was, as open her cell door did. Blinding the light was, having not seen it for days, but when her eyes adjusted, stepping in she could see...a Buneary, face half burnt off and a smile wider than she'd ever seem. Bennett was his name, a notorious killer whom even the asylum doctors feared.

Winced Emily did, fearing she was his next target...but to her surprise...he instead unstrapped her gag and offered her back her freedom. Perplexed she of course was...why would such a 'Mon care about her? And then it clicked...he cared because he was just LIKE her. Two kindred spirits, never loved, never appreciated, spat upon, stomped and trashed all over...rejected even by those they thought as friends...now here, locked up in the loony house because they fell off the deep end.

How ironic was it...that all her life, she was surrounded and abused by two-faced bastards...and now here...at her lowest moment...her only true savoir...friend...companion...the first 'Mon who not only saved her LIFE, but offered to share his with her 'till the end of their days...was a literal "two-faced bastard"...whom had a life not unlike hers.

So here she was again, back at her old workplace. The place where she was always told to "serve with a smile." The difference this time...her smile was genuine...as not the same could be said for her former cohorts.

Squirmed they did, bound and gagged with tape, silly faces drawn on their covered eyes and mouths much like how the children used to do to her many a year ago. She giggled in delight, their muffled, incomprehensible pleas for mercy bringing her glee like nothing else ever could. Leaned in close to them she did, the smell of freshly poured gasoline in the air... "Remember...happy servers make happy customers!~" she chirped, grinning from ear to ear...before walking out of the storage room...and throwing behind her a lit match.

As she watched her place of torment burn, the giant plastic statue of the "Smilies" logo ironically melting into a frown, she hopped into the passenger seat of her Honey-Bun's stolen car...and offered him the last bowl of ice cream the parlor would ever make. "Care to share a treat with me, my love?~" she asked.

"I'd be delighted, my little Sweet-Cheeks!~" he replied, taking a spoon and sitting back to enjoy the fireworks.

Since Ace and Bennett both have full origin stories (seen here: http://fav.me/d4e16gi http://fav.me/d9k078p), I figured it was finally time to fully flesh out Ms. Emoji, A.K.A. "Emily the Emolga's" origin story. Only this time, instead of a short bio, I decided to write it as a witty little story from her point of view, in a style implying she wrote it herself, hence the twisted, dark "Dr. Sues" formatting. XD