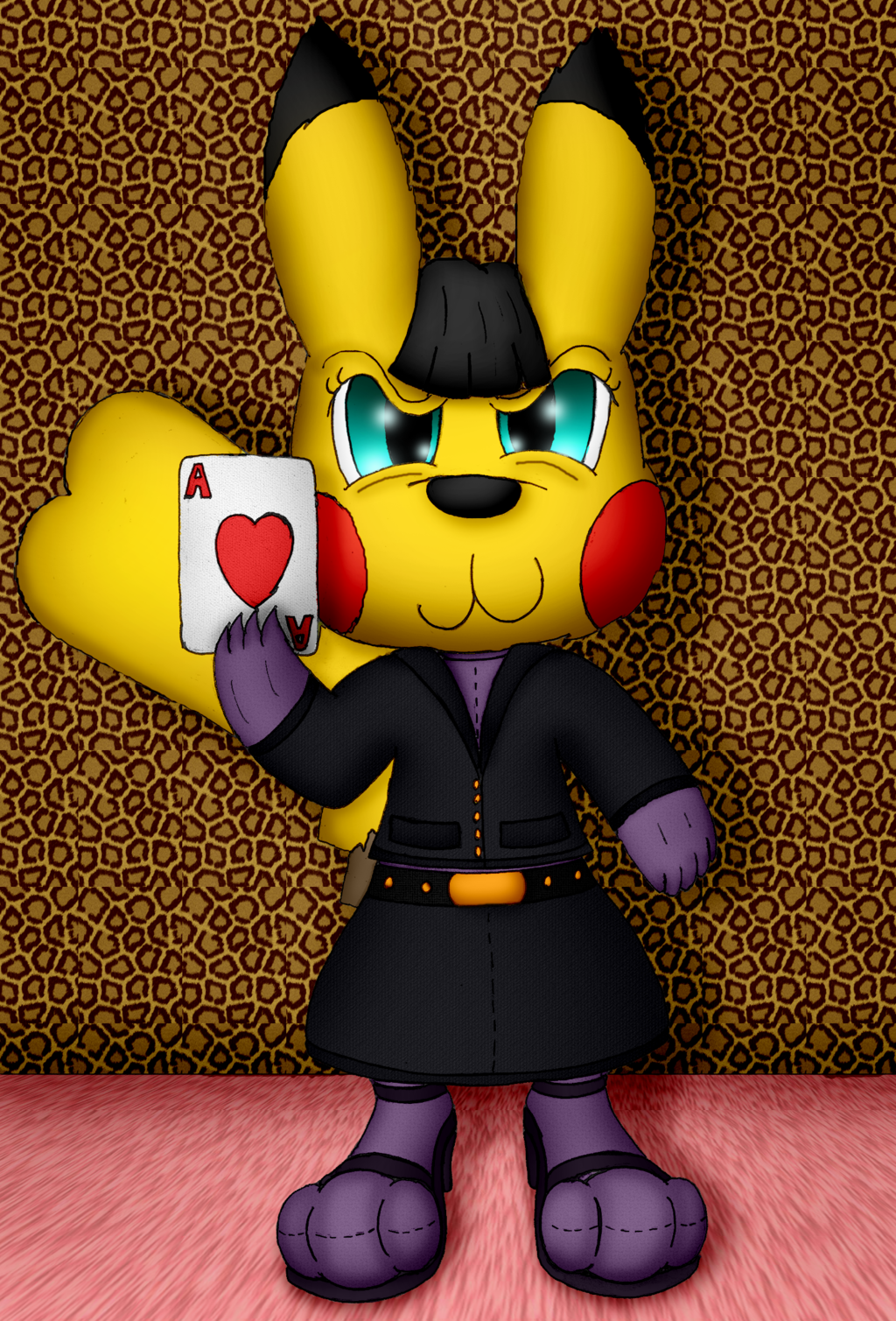 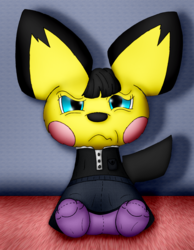 Been a while since I drew Ace's "Universe 63" counterpart, so I figured it was time to once again update her reference image. On top of that...a few days ago I thought up a little "bio" for her. Just a brief synopsis of her backstory and where she's at now as a character in my story continuity.

Alice, like Ace, was once a human who was transported to the "Pokémon World" (albeit a parallel one to the one Ace ended up in; a universe where everyone's gender was swapped,) but unlike Ace, who arrived in the PMD world at the age of 20, Alice was dumped into it and transformed into a Pichu as a preteen. She soon found young friends that helped her to adapt and survive in her new environment, many of these friends being the gender-swapped versions of Ace's best friends, and before long they started an Exploration Team together called "Team Voyager."

However, only a few months into this exploration team work, Alice lost BOTH her paws in an accident (something heavy fell on them), and at the time they didn't have prosthetic limb technology available to them, so she spent most of her teen years having to learn to get by using her feet, mouth and tail to interact with her environment. She got pretty good at it too, being able to grab things with her toes and even fight fairly decently. However...her disability left her prone to bullying, of which she received a LOOOT. Things ranging from name calling, to butting humiliating outfits on her while she was asleep that she'd be unable to take off by herself when she awoke to just outright beating her up or even shoving her face in puddles of water threatening to drown her just for fun. This made her very bitter and callous, especially towards criminals, so she began training even harder and fighting more ruthlessly.

When she was around 18 or 19, she finally evolved into a Pikachu, and soon after her and her team had scrounged up enough money to have her fitted with bionic paws, similar to Ace's. Over the next decade she began snatching up "outlaw arrest" jobs left and right, leaving almost none for any other teams and clearing through them at an unprecedented rate.

As the missions got harder, she got tougher, and little by little she'd make excuses like "I know it's against my code, but this guy had to be stopped! I needed to make an exception!" This began happening more and more as she even began taking down entire crime syndicates single-handedly...and before long she stopped bothering to check if the Pokémon she was capturing, beating up or killing were criminals or just innocent bystanders that happened to be in her way. All in the name of "the mission."

Naturally, her team mates grew increasingly concerned about this, until they eventually confronted her about it, but she'd hear none of it. Every day they'd try to rein her in, try to persuade her to stop dealing out "judge, jury and executioner" justice, but she'd just scowl at them and say "I don't care anymore." Soon enough, when her friends started learning that she was even taking out innocents on her tirades...and had even begun taking really shady jobs with "no questions asked" policies, they said enough is enough and took her on by force. She effortlessly beat the snot out of all of them and warned them never to get in her way again, or they wouldn't be spared a second time.

That was the last she ever saw or heard from any of her friends and colleagues for upwards of two or three years until the current timeline. She'd abandoned all sense of ethics and became concerned only with "the job", because thinking about anything else hurt too much. She made herself numb in order to keep the emotions away. Compassion and remorse only held her back, she told herself. Sentiment is best left in the past. Only the next job matters now.