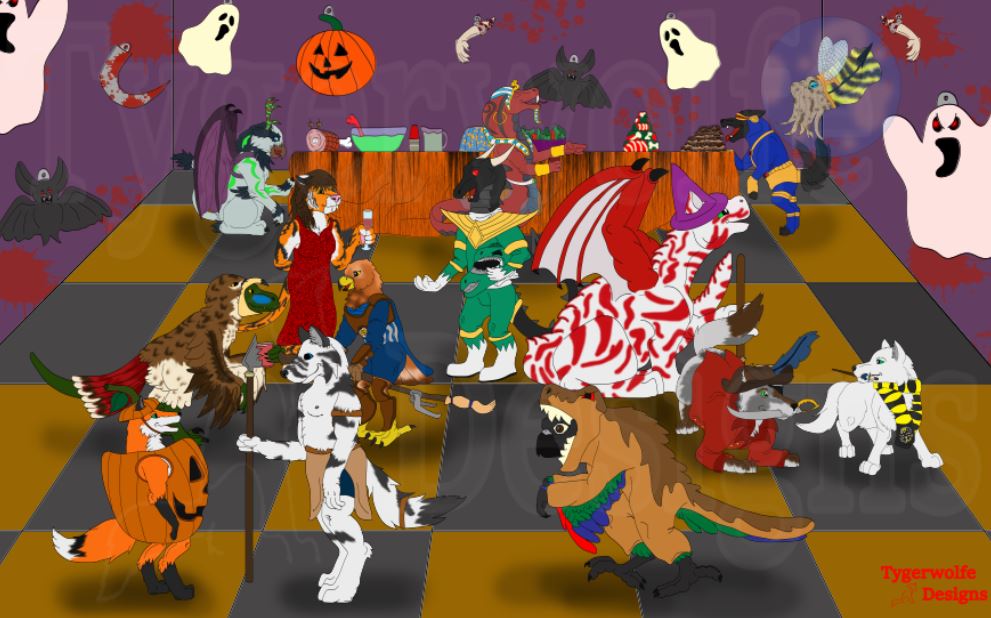 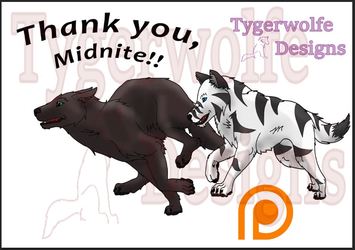 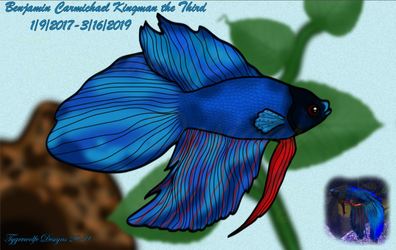 Welcome to a Tygerwolfe Designs annual tradition, loosly inspired by something :devlysozyme: used to do years ago.

So what's going on here?! Starting on the left in back, it would appear that Enya - a WoW Owlcat dressed as a Demon Hunter - is interested in the ham on the buffet table. And the ham seems a little concerned...
Next, we have Skywing - a cobra naga, dressed as a pharoh - enjoying a drink of spooky punch and laughing at the absurdity of both the zombie cake and Midnite - a black wolf, dressed as the 1990s Cyclops from X-Men - who's gotten really quite excited about the giant plate of Halloween Donuts and Eclairs.

In the middle-back, starting from the left, we have Bliss - a tigress dressed as a vampire in a stunning, sparkly red gown - enjoying a few sips of "blood" wine, and some nice conversation with Scribe Of Bahamut - a black dragon, dressed as the Green Ranger from the 1990s Mighty Morphin' Power Rangers.

Then we have Cranberry - a red-striped dragon dressed simply as a witch, with her purple hat and broom - watching and enjoying the antics as Squishy - a cuttlefish using a combination of costume and her own color-changing ability to "bee" herself - floats around and does acrobatics in her magic bubble.

In the middle-front, starting from the left, we have Redfeather - a utahraptor dressed as a red-tailed hawk- having a drink and listening to Asazi - a golden eagle anthro, dressed as a Ravenclaw Keeper - no doubt describing the finer points of Quiddich.

Next we have Riley - a grey wolf, dressed as a pirate - trying to entice Namarie - a white wolf...or is it a Hufflepuff Animagus? - to play. Perhaps a "duel" of sorts with their props?

Finally, in the foreground, we have Katie - a red fox, dressed as a Jack-O-Lantern, telling me (a striped wolf, minimally dressed as a caveman...wolf) about how fun it was to make her costume. I, on the other hand, am unaware that there's a dinosaur sneaking up on me in the form of CupOfConure - a Conure anthro, dressed as a dinosaur - ready to pounce and startle me from behind.

Add in the food, the drinks, and the spooky decor, it looks like this party was a lot of fun! I can't wait to do it again next year!

How does the Patron Halloween Party work?

Become a Patron at any level (but must be a Patron for the months of September/October to be eligible), and be up to date when Halloween time rolls around. At the beginning of September I contact all my Patrons and ask them what they'd like their costumes to be. Then over the course of the month I will sketch, lineart, and give you a full flat color icon of your 'sona in costume (complete with an HD file for your own use), and then I compile the full image which is released to my Patrons (along with an HD wallpaper version) on Oct 27th, and the final image is released to the public on Halloween.

There may be other parties next year, along with all the other goodies my patrons get at all levels! Check it out.