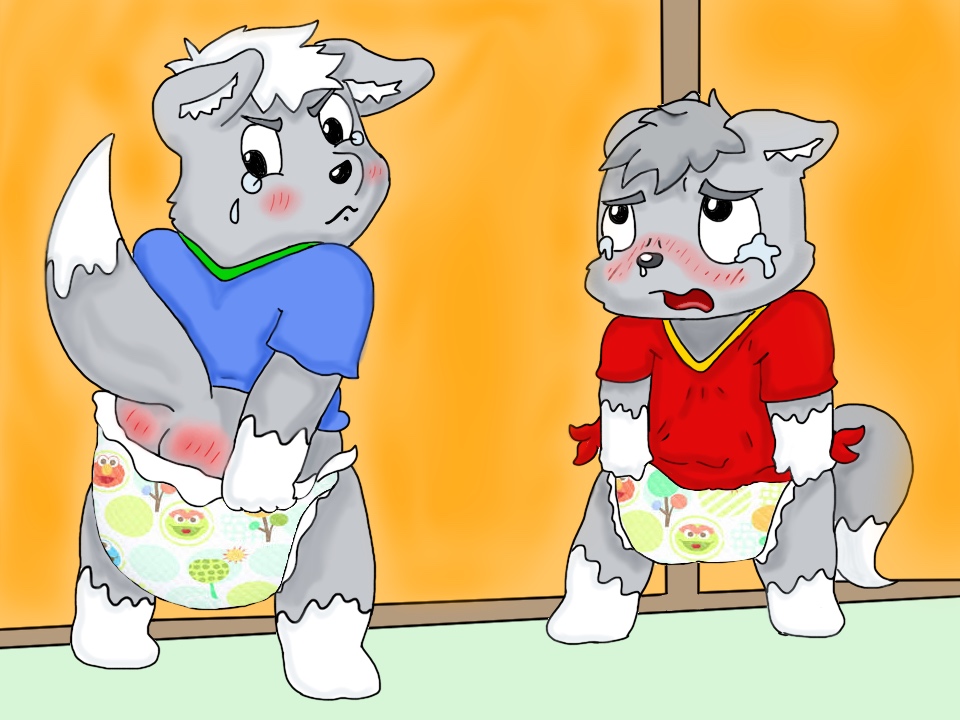 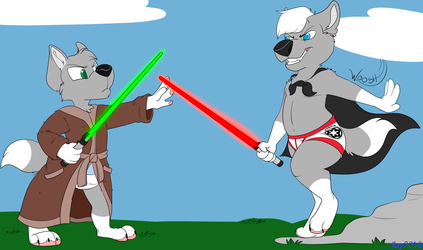 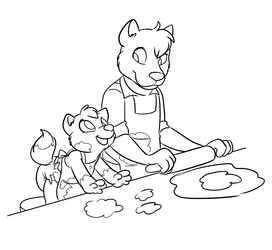 "Stinky poopy bwains!" shouted Caiden as he took a swing at his older brother Kyle.

"Stupid little mutt!" cursed Kyle as he shoved his brother to the gound.

Caiden and Kyle were fighting yet again.

The Smith boy were spending their weekend at their cousin Sam's house. Caiden and Kyle were both very excited to visit. They both loved it their and, contrary to popular belief, were usually very well behaved. Kyle enjoyed the many comics and game systems that his uncle owned. Caiden liked playing 'big brother' to Sam even though he was only half a year older. They were dropped off at their Aunt and Uncle's house on Friday. There were no issues with any of the boys that day. They even let them stay up one hour past their bed time since they were so good. In hindsight, that was not a good idea but you live and learn.

The next day was a very different story. Even though they were put to bed an hour later, neither Smith boy fell alseep until much later. This created two very grumpy cubs when they woke up the next morning. The first sign of trouble was when Kyle didn't want to finish his breakfast. Not much later Caiden had repeatedly ignored instructions to pick up his toys. Both instances earned them a time out. Later, Caiden and Kyle were watching tv and wanted to watch different shows. The disagreement lead to a shouting match and a tug-of-war over the remote. Their Uncle broke it up and sent them straight to the naughty stool. The boys were warned that if they had anymore issues today that they were going to be in big trouble. All the while, little Sam was being a good sport and well behaved throughout everything.

After lunch Sam was put down for a nap. Caiden and Kyle still take naps too but they are on a different schedule than their cousin. Since his cousin was in bed, Caiden decided to go and play with one of Kyle's action figures. Kyle was not happy with this since Caiden had a bad habit of losing some of the pieces so he went over and demanded it back. Caiden, obviously, had no intention of giving it back so he said no and stuck his tongue out at him. That prompted Kyle to lunge out and try and take it from Caiden. A short tugging match ensued, but quickly turned into an all out brawl.

"Stinky poopy bwains!" shouted Caiden as he took a swing at his older brother Kyle.

"Stupid little mutt!" cursed Kyle as he shoved his brother to the gound.

Their Aunt could hear them from the other room and rushed into the den to break up the fight.

"What is going on here?" demanded their Aunt sternly as she held them by their scruff.

Both boys then tried to blame the other one for starting it.

"I don't care who started it. You both know better than to fight or use those naughty words. Don't you?" lectured their Aunt as the boys nodded solemnly.

"You two are acting like a bunch of babies. Big boys don't fight each other or give attitude, or use naughty words. On top of that, your Uncle and I both warned you that you would get in big trouble if we had anymore issues didn't we?" continued their Aunt as she led them to the couch.

"We'll be good! We'll be good!" pleaded Caiden as and Kyle as their pants, and diaper/underwear were removed.

"Oh I know you both will. We are going to make sure of that." said their Aunt as she put both of them over her lap and gave them five firm swats each.

After the spanking she set the bare bummed boys in separate corners of the room while she quietly went into Sam's room.

After a few minutes she returned with two of Sam's diapers.

"Since both of you have been acting like babies, you're going to be treated like them." said their Aunt as she started to diaper both of them.

Both boys pleaded to not be diapered or at least to wear pants. Caiden was not potty trained before this, but he didn't want Sam to know that he still wore diapers since he was older. Kyle is obviously potty trained and his Aunt explained that he could still use the toilet, but he had to wear a diaper like a baby for the rest of the day.

Caiden tried to pull his shirt down to cover his exposed diaper, while Kyle look at his rear to see the damage.

"We're sorry Auntie...." apologized both boys as they were embraced by their Aunt.

The picture was drawn by david.soy