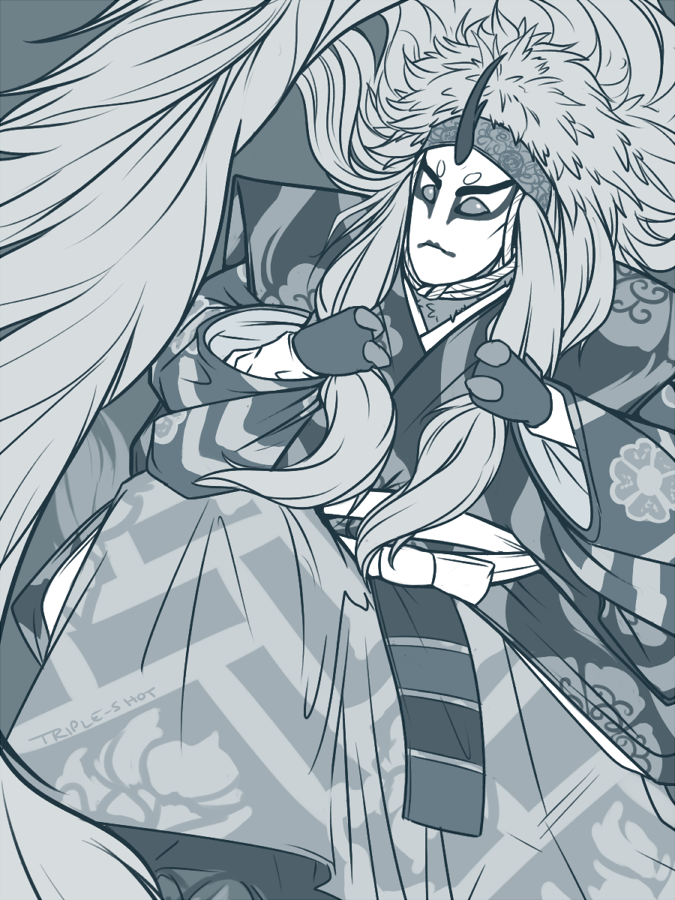 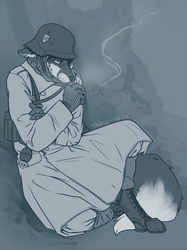 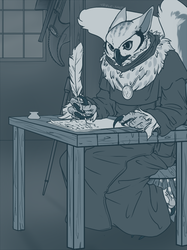 It's an odd thing to be extremely inspired to draw something and yet continually hit roadblocks when it comes to research haha. That, coupled with a bad sinus infection and being laid low by the side effects of antibiotics, made this a difficult image to produce!

Featured here is Atroxi's character Ynyr, who is a really neat Kirin inspired character... and when she gave me free reign and mentioned that the face/mask could be anything, even snarly with teeth everywhere, I immediately thought of Japanese traditional Noh theatre. In particular, the Hanya Noh mask (example). Unfortunately I could find next to nothing about the actual outfits worn by a character wearing said Noh mask... but I did learn quite a bit about the masks themselves and watched many a documentary haha.

This also lead me to another form of traditional Japanese theatre: Kabuki.
Again, upon watching many documentaries and footage about various Kabuki theatre (which was originally more theatre for the masses as opposed to Noh, which was far more refined and more for the upper/ruling class) I came across a very visually interesting character who was whipping this long mane of red (or white) wig all over the stage in a very wild and arresting way. I wanted to know more. The problem? I had no idea who the character was, and the video was completely in Japanese!

So after even more frustration and research I discovered that these characters who proudly prance about the stage and eventually start flinging these long manes about in a highly entertaining and wild manner were actually based on lions, or rather Shishi/FooDogs, the spiritual guardian lions.

One of the famous Kabuki plays is the "Renjishi" Lion Dance, (which if you're interested in watching you can find the videos here with an explaination of what is happening here). This is essentially based on the tale of a father lion tossing his cub off a cliff and anxiously waiting to see whether or not his son is strong enough to climb back up.

The other video that initially caught my attention (and provided no clues for me haha) was this one in which you get a really good feel (especially later on in the video) for the lion character, as well as how interactive Kabuki theatre was meant to be.