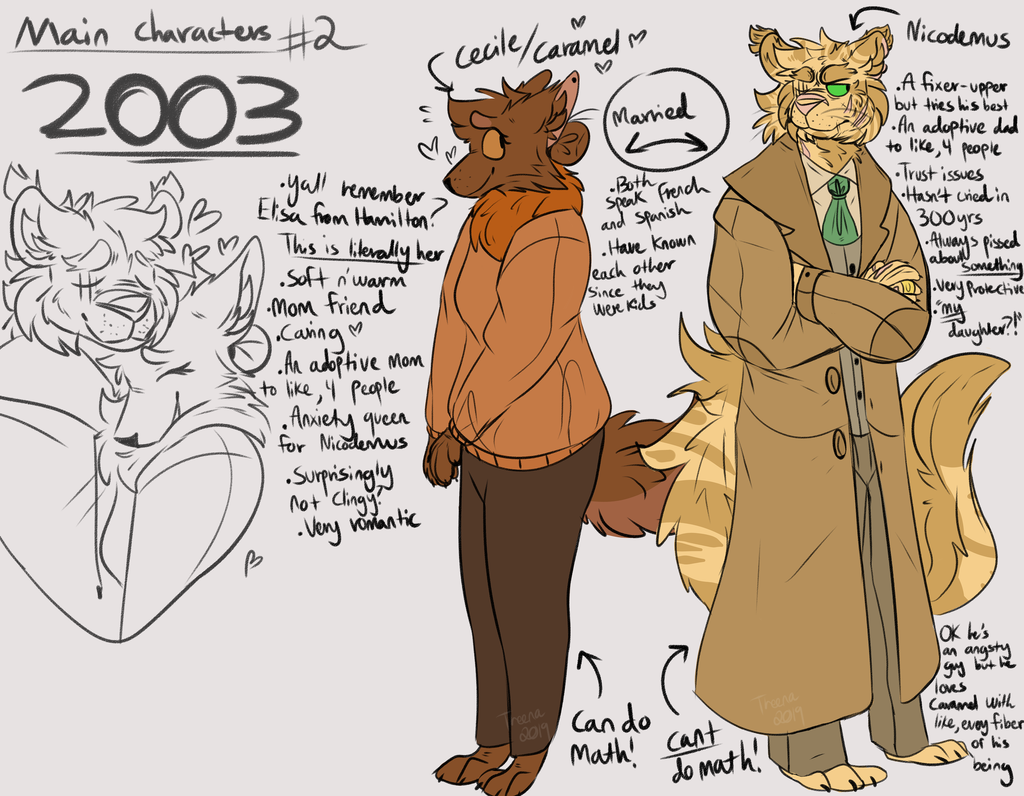 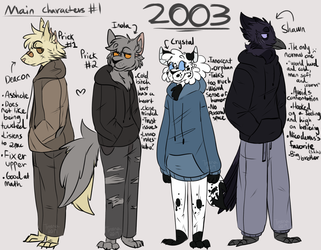 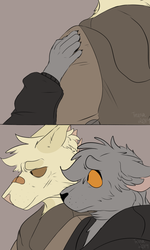 okay i'd include more characters in this one but Caramel and Nicodemus are like, peas in a pod and they defenitly need their own little section together bc their shit is tOO LONG.

Nicodemus (Nick) Fabrizio Clawson - Important main character although not necessarily a protagonist. He's male, a tabby maine coon, and is in his early to mid 30s during the beginning of the story. Nicodemus grew up wealthy with both parents in the picture, but his father was horrifically abusive and if you were Inola, Nicodemus would tell you they're not words for a child's ears. To this day he typically has emotional vulnerability issues and doesn't like to let his guard down. Nicodemus doesn't particularly enjoy talking about his past home life but he thinks fondly about his mother, who was a French immigrant with a terrible language barrier. Nicodemus met Caramel when he was around 10 or 11 years old and the two have been best friends ever since then, sharing the same friends and interests all throughout middle school and high school. It's been noted that both of them had a punk rock phase and yes -- Nicodemus saw a Queen concert live. Nicodemus moved out of the city with Caramel and a few others at 18 and went to college for about 4 years to get a bachelor's in teaching (English to be specific). It was during this time he got a shop at a floral shop and met his 1st wife, a fox, Rose. He and Rose dated for about 6 months before finally moving in with each other, Nicodemus promised to marry her after college, and marry her he did. Caramel was here for all this, so were a couple of Nicodemus's friends he still knows to this day. The two spent a good 4 years as a married couple together before Rose was tragically murdered by the gang leader in their area after a very long, drawn out dramatic 3 weeks with Nicodemus dealing with him harassing her. Nicodemus planned on having children with her but unfortunately he never got the opportunity.
Eventually he fell into an alcoholic spiral caused by unmanaged grief and angst, and ended up kind of inserting himself within things like local gang activity, gambling, etc. Caramel ended up finding him sobbing on his kitchen floor and the two kiiiind of had some sort of romantic spark happen between them and long story short they ended up moving in together after a while. Caramel helped him get off his addiction yet he still struggles with long-term addiction, but at least he likes other drinks more than alcohol (like tea). When Nicodemus was about to turn 30, Caramel came home with a little she-bat called Crystal. Nicodemus resented Crystal at first, he was turned hard and cold because of his past and just generally had a hard time finding motivation those days, so he usually ignored her or seldom spoke to her. Caramel was the only one who could thaw him out for a while. Eventually he and Crystal grew much closer, and he became like a father to her. Unexpectedly Crystal began to bring the kids she did end up finding to Nicodemus, claiming he could help them. And help them he did. Nicodemus proposed to Caramel a year after he met Shawn and a couple months before he met Deacon. The two are currently fiance's because of their economic situation, but if all doesn't go well, they'll elope (something Nicodemus doesn't really want to do personally). Nicodemus unfortunately ended up working for a gang, but there was a plus involved; Nicodemus became highly respected within their "community." He made friends either by debt or by sheer will, which means he, his wife, and his children are under protection from the gang leaders.

After all this has happened to him, Nicodemus has a very hard exterior. He's not cold, but he can be reluctant to feel at times and is very reserved and not as extroverted as he once was. Without his guard up -- Nicodemus feels anxious and scared, like someone will hurt him worse than he's ever been hurt before. Although once you get to what's underneath all that mess, Nicodemus is a very fatherly, sweet, and protective person. He worries a lot (and i mean a lot), and he can come off as irritated or nervous at a lot of points. But really he's just concerned for everyone's safety. Although it's disappointing to see how he used to be so friendly and trusting, and now he's everything opposite of that.

Cecile (Caramel) Alejandra Chastain - Important main character although not necessarily a protagonist. She's female, a fox, and is Nicodemus's age. She grew up wealthy alongside Nicodemus with both parents in the picture. She had a pretty typical home life, although she wishes she got to see her dad a tad bit more than she did. Not to say they weren't close, but he worked often. Her mother was very nurturing and was a nurse at the time during her childhood, which inspired her to follow in her steps. Caramel met Nicodemus when she was about 10 or 11, and the two have shared everything together. She moved out of the city with Nicodemus and some other friends at age 18 and went to college for 4 years inside the nursing program, becoming an RN. Caramel had more of a "college fun" kinda life than Nicodemus did and she was noted to be quite the party animal. I wouldn't put it past her to be having a lot of boyfriends lmao. Although -- Caramel did find some very good, nice partners though, but one or two ended up cheating on her which left her with a bit of relationship anxiety. So that kind of destroyed quite a few of her other relationships, leaving her emotionally damaged. Nicodemus was always there for her though, and she was extremely happy when he finally married someone. She and his wife, Rose, got along very well! She was also there for the funeral when she died, which was heartbreaking for her. She found him in his house sobbing alone in the dark after a long while, and figured out he had quite the problems to manage :( although when she helped him get back on his feet, the two sort of..revisited some sort of teenage romantic feelings for each other. She ended up moving in with him after a while although when finding out about his job, she wasn't too thrilled. In fact she was horrified, but was going to put up with it because she loved him.
When the both of them were nearing 30 or 31, Caramel came home with a little she-bat called Crystal. She noticed Nicodemus didn't take kindly to her, seeing as he usually ignored her or seldom spoke to her. Caramel was the only one who could thaw him out for a while. Eventually he and Crystal grew much closer, and he became like a father to her while she became like a mother to her. Unexpectedly Crystal began to bring the kids she did end up finding to Nicodemus, claiming he could help them. And help them he did. Nicodemus proposed to Caramel a year after she met Shawn and a couple months before she met Deacon. The two are currently fiance's because of their economic situation, but if all doesn't go well, they'll elope (something Caramel doesn't really want to do personally).

Caramel is very sweet and caring, but she is weighed down by all this excess feeling of emotion. She's motherly, but sometimes feels limited with her relationships and experiences anxiety for herself or others quite a bit.