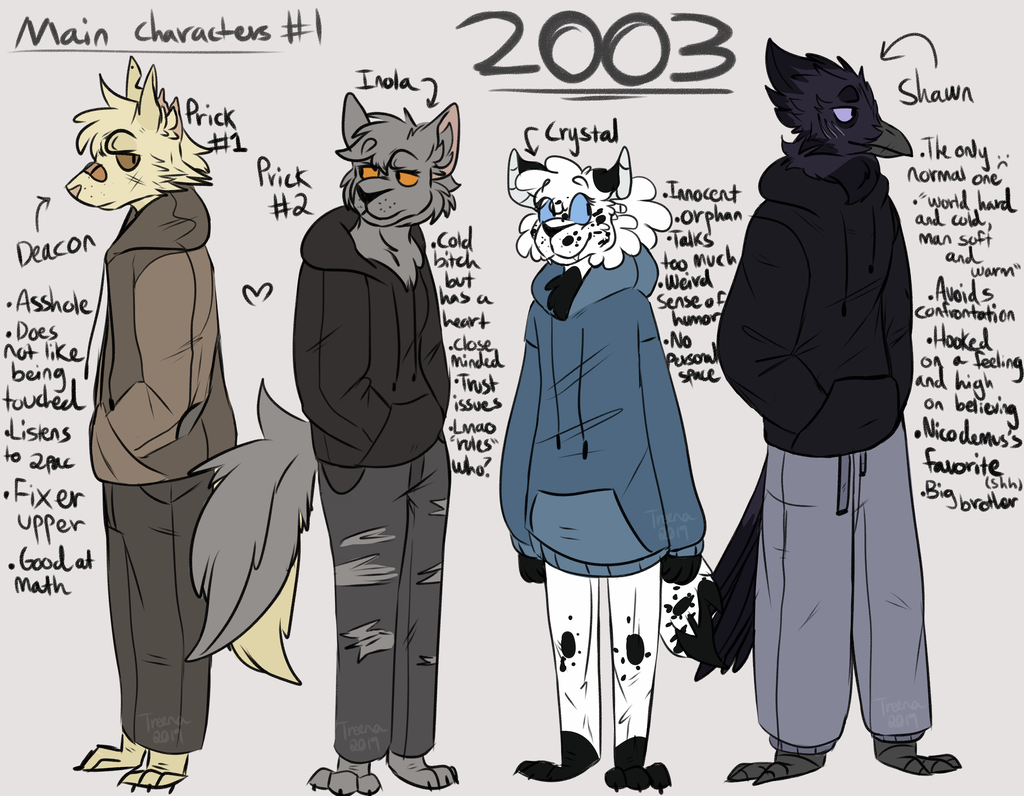 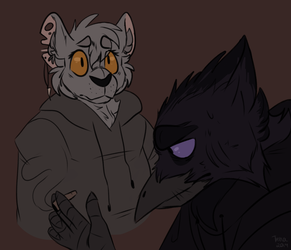 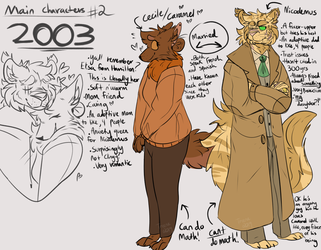 Sort of a re-do of the main characters of 2003, here's the old one character chart

Inola Atsila Fangwhine - Protagonist, story is told from her POV. She's female, a gray wolf, and has freshly turned 16 at the beginning of the story. When she was around 10 or 11, her father left her mother, not being able to put up with her shit anymore. He left Inola instead of taking her with him. Inola doesn't blame him for leaving, since her mother is usually drunk and tends to be physically abusive. She ended up running away from home after another physically abusive fit from her mother at the start of the story, and has yet to ever return to see her. This caused her to automatically drop out of high school and leave everything she knows behind. Inola is blunt and is extremely defiant and kind of a bitch, however this isn't to say she doesn't have a heart. Inola can be quite vulnerable and soft with those she trusts, which isn't common at all, because she has trust issues. This leads to her bottling everything up which fuels her bitter personality. She is also quite close-minded and slightly racist (or "speciesist") towards felines simply due to the way she was raised. Inola is also careless of rules, and lives her life acting as if they don't exist. This leads to a disgust and slight phobia of the police, which she consistently avoids.

Deacon Thomason O'Connell - Second protagonist that later becomes a romantic interest. He's male, a fox, and is older than Inola by just a few months. When he was young (too young to remember correctly) his mother left his father alone to raise him, likely prioritizing drugs and partying over the both of them. His father fell into an emotionally conflicted spiral and spends most of his time drinking or smoking pot with people Deacon doesn't really know. His father is sometimes physically and/or verbally abusive and Deacon is commonly hit a lot. This is the root of his haphephobia. His personality is not particularly likable and he is called an asshole by many of his friends or parental figures. He has anger issues and tends to bottle things up, except unlike Inola who is much calmer and silent, he's more explosive (like his father) causing him to be a hothead. Deacon formally quit going to school at an unusually young age (15) due to his lack of motivation for anything.

Crystal Joy Baker - Third protagonist, a roommate and close friend. She's female, a bat, and is the youngest (14) of the group. Crystal was orphaned and does not know the intentions or reason her parents had to leave her, but she spent most of her life at a city orphanage. She doesn't remember a lot of the people or adults she knew there, but according to her, the experience wasn't THAT bad, and she has no traumatic memories from the place. She was "adopted" at 11yrs and taken to a very rich suburban high-end home where she lived more so as a cleaner/chore-doer than an actual child. The "parents" weren't very kind to her and she was usually yelled at for not doing things perfectly. There were other children there, about 4 or 5, but they were much older and usually ignored her. One day Crystal was fed up and ran away, never to come back. She reached the southern part of downtown and found an abandoned apartment building and made it her home. Then she met Nicodemus & Caramel, and later met Shawn, then Deacon, and afterwards Inola. Crystal is a very innocent and bubbly person and has accustomed well to her current style of life. She acts 3 years younger than she really is, has no personal space, and probably needs some sort of re-introduction into society. She's far from crazy or weird, she's just a little..much.

Shawn Ryan Lucille - Fourth protagonist, a roommate and close friend. He's male, a crow/raven hybrid, and the oldest (17/18). Shawn's parents were druggies/drug dealers that worked for illegal groups and the such. His mother was the worst -- addicted to heroin, while his father was more of a "let's get high and party" kind of guy. Shawn witnessed all of this happen alongside his sister, who he prefers not to speak about. One day when he was 16 he packed his bags and had enough of his parents nonsense. He wanted a better life and was determined to find one. He begged his sister to come along, but she refused. She didn't have the heart to leave her parents nor did she have the courage to run away with him. Shawn made the painful decision of leaving her behind, and eventually found Crystal. Shawn is a very content and calm minded person who does a good job at keeping situations under control (a reason why Nicodemus trusts him to watch after Crystal and Deacon). He smokes a lot of marijuana, typically with Nicodemus, Deacon, or Inola. He doesn't let Crystal touch it or see it, but she knows about it. Shawn is also gay and prefers not speak of that out of fear of being hated, and as the story progresses his ex-boyfriend (Lukas) eventually cheats on him with someone named Anthony. He eventually meets his future husband Elijah. Shawn is also a big brother figure to Crystal, who he would protect with the cost of his life.