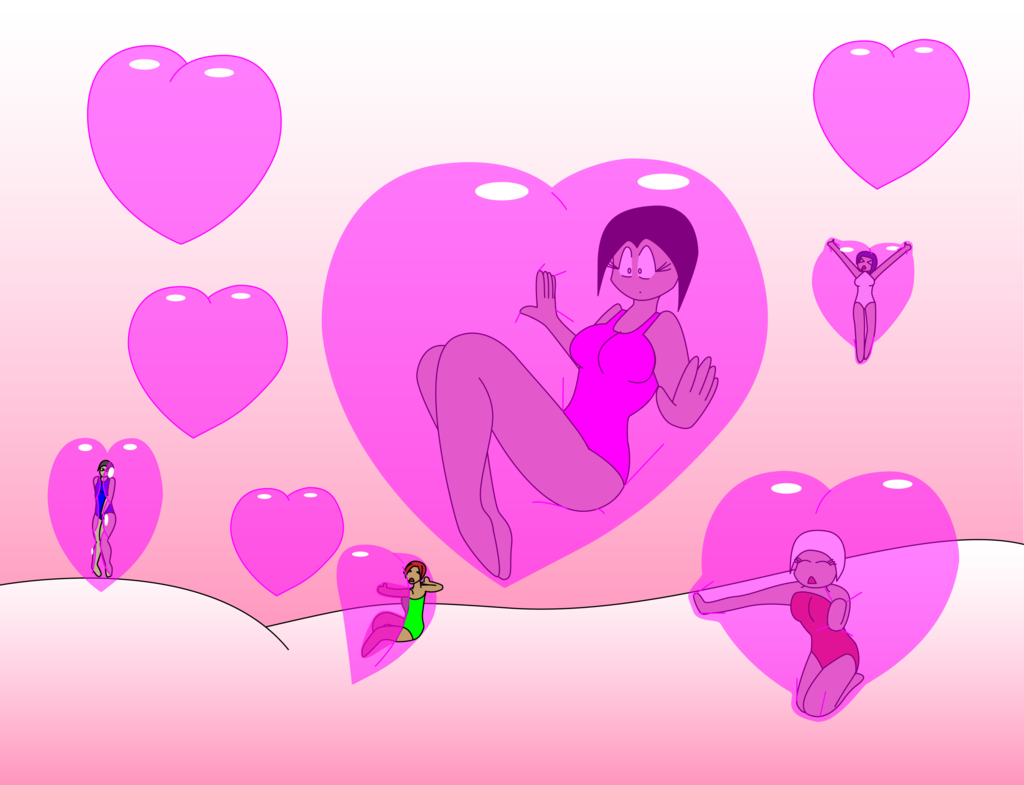 A few college girls were hanging out at a private beach for a weekend, suddenly the sand changed color as did the rest of the beach. The sand beneath became soft and flexible like rubber and changed to the color pink, the sea changed color as well becoming soapy with a pinkish rainbow tint.

Then these strange heart-shaped bubbles began emerging from the pink sea, and began lazily floating towards the beach. The beach girls just stared as the bubbles slowly approached them. They seemed so harmless, one of them even reached their hands out to touch them.

Suddenly the bubbles wrapped around the unsuspecting girls, and began squeezing them with their squishy membranes! Until the bubbles folded around them completely trapping them inside. One by one they were caught by the cute floating heart bubbles, left helpless in their jiggly prisons.

The girl in pink just stared in awe as the bubble enveloped her friends, then suddenly a bubble came from behind her and squeezed her, she offered little resistance as she slipped through the bubble leaving her trapped. She was calm and composed but baffled and confused.

These semi-sentient bubbles are very mischievous organisms. They reside only in this location and trap unsuspecting victims who come to their territory.
Though they are not deadly, far from it, they are quite harmless and playful. They keep their captives within their jiggly membranes for fun. They absolutely love feeling their pray wiggle around and struggle inside them.
Though if the captive remain still, the bubble will eventually get bored and release them, but for those who fight against their prisons it’s different, the longer they struggle the longer the bubbles hold them.
In rare cases, if the bubble takes a liking to their captive, they will keep them indefinitely, keeping them alive without aging or the need for food or water.

I made this image back in 2015, and long story short I just thought that I would finally share it.

Though I will confess, I took a little bit of referencing from this image, https://thiridian.deviantart.com/art/Help-Yeung-Part-3-452779173