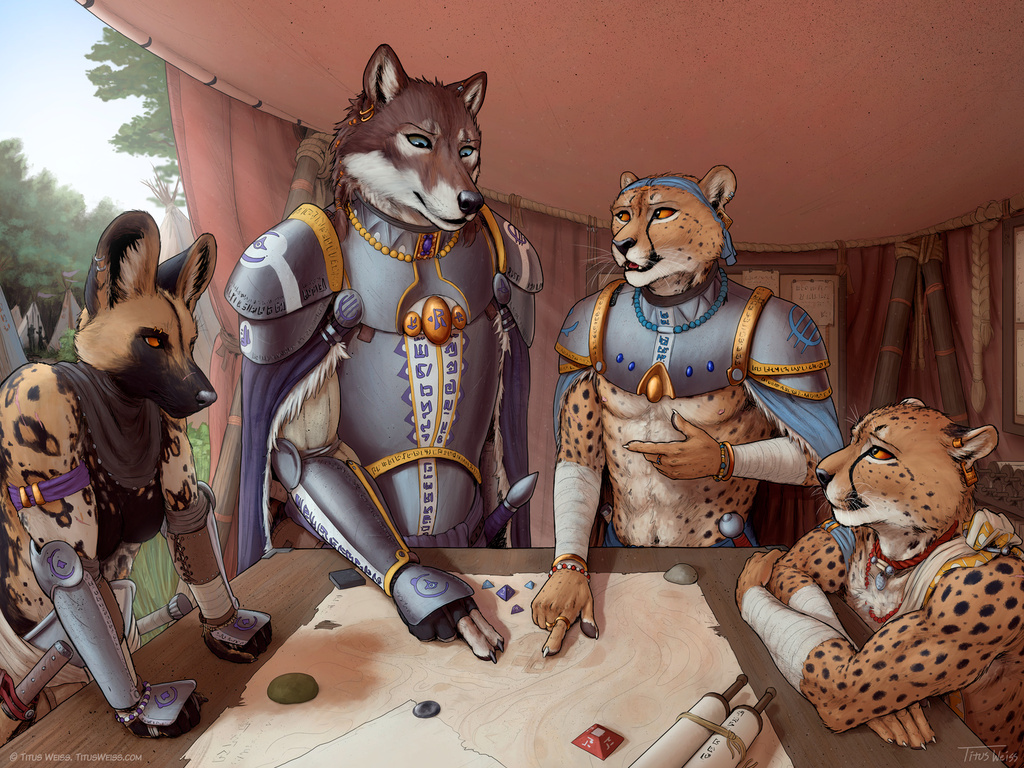 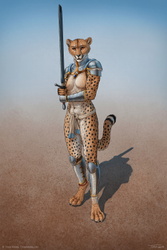 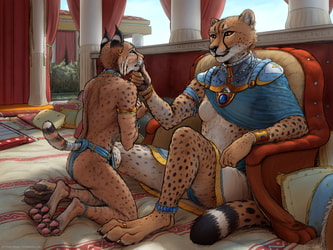 Here four Be’vaal commanders, each in charge of separate armies of the Wolf Alliance, meet to plan a unified battle to take an enemy city.

The characters are the following:
On the left is General Tatt’khaa, daughter of the AWD Alphas and leader of one of the largest groups of joint AWD-Hyena forces. She is a new character I haven’t drawn before, but she is the first cousin of General Dirri who appears in the current comic (here) ^^ Also at this point in the timeline (a short time before the end of the war) she is in a relationship of sorts with Paladin Ti’maar.

Middle left is Paladin Areco’tavak, eldest living son of Great Alpha Praet’tavak (leader of the entire Wolf Alliance and head Alpha of the Council of the Alphas). Areco is the commander of half the Wolf forces which consists of many separate species, but mostly Wolves. Areco hasn’t appeared in a drawing since an older comic page (here), so I ended up re-designing the look of his character a bit :) Along with some fancy new armor and new fur pattern. But his character is mostly the same. He is very good friends with Paladin Ti’maar, as they are around the same age (Areco is 1 year older) and they grew up together (mostly). He is also very close to Alpha Ra’maar, and thinks of him like a wise old uncle haha.

Middle right is Alpha Ra’maar, Co-Alpha of the Cheetah Territories in the Wolf Alliance. He is officially over the Cheetah forces, but also supervises other armies along with the other Alphas. Directly he leads 1/3 of the Cheetah forces, which contains multiple species in his territory. He has recently appeared in drawings along side his Co-Alpha Nika’maar (here) and the most recent comic page (here). In this scene he would actually be the one in charge; because though he is above in rank and below in caste to the Wolf Areco (so they would be considered equals in social status and rank), he has Areco beaten by far in experience, having almost 20 years more military experience than him. (Alphas pretty much always outrank everyone else, besides other Alphas)

On the right is Paladin Ti’maar, eldest son of Alpha Ra’maar and Alpha Nika’maar. Along with his parents, he directly commands 1/3 of the Cheetah forces. But it is very common for him to work jointly with his father and mother, and often with at least a few other armies (such as Areco’s forces). Since he is my “main character” I draw him quite often; he has a ref sheet (here), was in a recent comic page (here), and has some recent solo art (here) ^^

As always happens, I wanted to make this drawing a finished sketch XD But after I inked it and started doing some shading, I was far too tempted to color it and couldn’t resist. So I did :P I wanted to have a chance to try out the newer coloring technique that I have been using on a full background scene ^^ I really like this drawing XD It’s fun to see the different characters and species together ^^ Downside is it took a long time, probably 28 hours or so, like a whole week of work with streaming lol. But I think it was worth it :)