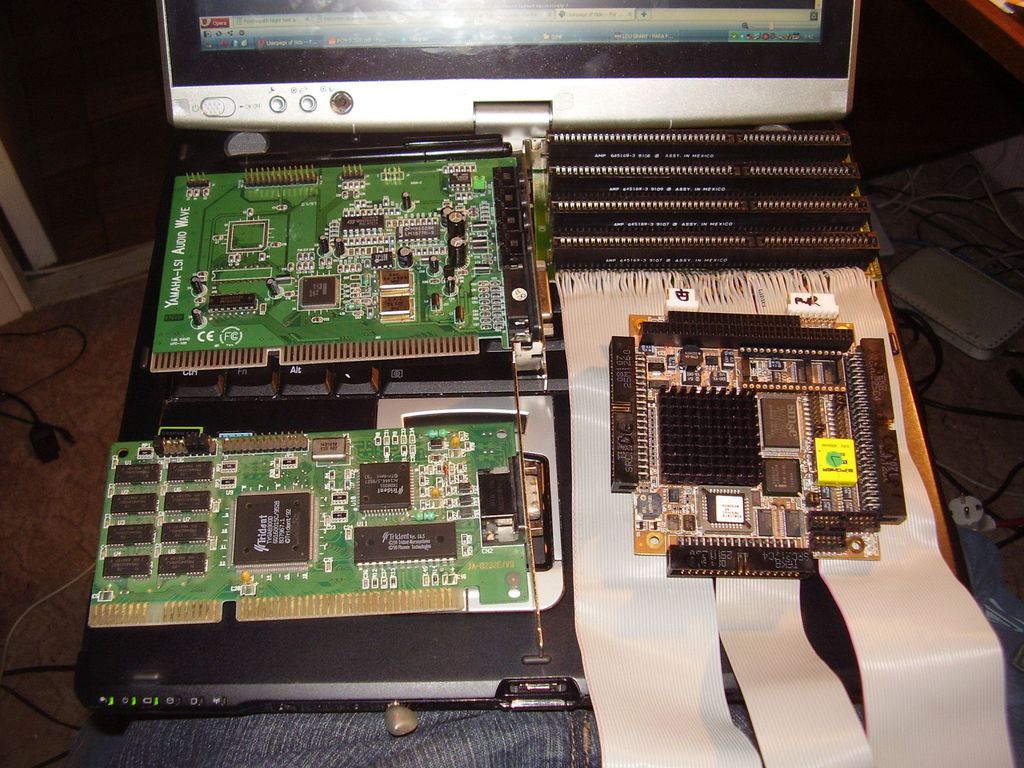 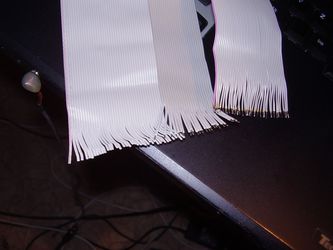 A while ago I got some PC104 modules from a friend, two 386 based ones and two AMD SC520 based ones. The one pictured is the AMD thing (bottom right).
Specs are and other info found here

These are basically near full IBM PC compatible computers in small form factor, intended for industrial use. You can run windows, linux or other things that can run on a x86 based system which makes one of these perfect for a small low power music player thingy haha.

Past few hours I have worked on the PC104 to ISA connector adaptor, seen in top right. 104 wires, half done. I have to strip the other ends and solder on connectors I can plug into the PC104 interface. Then I can actually use the boards as I get video out and ability to connect whatever ISA cards I have.

Sound will come from a Yamaha YMF718 based sound card (top left). I will add in a YMF721 to the unpopulated QFP spot to gain hardware based MIDI that isn't too bad haha.

Video card is a Trident TVGA8900D based thing. I have one other ISA based video card but it has less VRAM so no higher resolutions or stuff with more than 16 colors at 640x480 lol.

For input I have planned to take a cheapo keyboard controller board and wire some switches to it to handle most used keys, mouse I won't have and instead I'll use the gameport + JoyToKey to create mouse functions and some shortcuts.

I'll run Win95 on it, because 32MB is not really enough for Win98SE and XMplay runs on 95 just fine and that's the player I intend to use for everything anyway. I mostly play music off my server over LAN, but I could also play internet radio and CDs via a PC CD-ROM drive (only problem is noise, I'll have to find some old quiet drive or means to force modern drives to stay quiet). The thing is meant to do zero noise, that's the main motivation of this project, aswell as getting excellent audio - yay Yamaha !

I haven't felt so productive in a longass time. I am slowly getting out from that depressive slump :D

I'll post some designs sometime later when I settle some hardware choices.