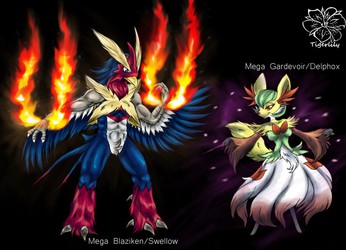 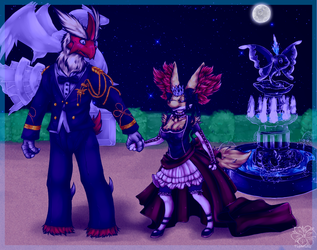 Finally got around to do a meme! And completed one at that! I always tried to do memes but I never got
around to finish them. I'm always art blocked or never feel inspired to draw it again since forever...
Yes, it's another blazikenxdelphox what you'd expect...You would think I would get tired of drawing this pairing
over and over? Guess not. But I feel like my friends do the same with their pairings here and there lol. I
also had a lot of fun drawing this especially trying out many ways to have them kiss.

Good morning kiss: Apollo has done this many many times. It's one of Apollo's worst habits in the morning
of waking EVERYONE up...including poor poor Racheal. Makes her wish she has ear plugs that can stop
his crows. XD

Sloppy kiss: Now both Apollo and Racheal can be both affectionate though, Apollo takes the cake for being
the most affectionate of the couple. He doesn't always have the strong daring kind of affection, but he's
always happy to be around Racheal and would be the first one to greet her everyday.

Awkward and Seduction kiss: Yeah Racheal's pet name for Apollo IS 'hot wings'. He's not really bothered
by being called after a food. It's just how it is when people called each other after 'food'. A little trivia
as to why Apollo gives Racheal the pet name 'my foxy' is because of the japanese name for delphox
'mafoxy' which sounded like 'my foxy'.

Angry kiss and apology kiss: I feel that Apollo being as a blaziken instead of his mega form would be
fitting for the angry kiss. Although this is rare for them to ever argued as they're pretty 'flexible'. Sure
Apollo tend to often does embarrassing things to Racheal but she doesn't seemed to mind his jolly
nature. Whenever they do get mad at each other and after their resolving the problem; 'both' will apologize
each other regardless who's fault it is.

Goodbye kiss: Yay, submitted of what Apollo and Racheal's trainer look like!:la: Apollo's trainer Nate is
a pretty good battler who just loves his fire types and his water types.^^; He's pretty competitive but
a good sport like Apollo. His number one partner is always Apollo no questions asked, but he still cares
his Pokemon equally. He's a Pokemon ranger and a long time tournament champion who keeps training
his Pokemon to their top potential.

Linear is a Pokemon ranger and a beginner breeder. Loves her pokemon and wants to do the right thing
but has a slight fear of dark types pokemon...even though she had a couple of dark type pokemon.

Spiderman: I really had so much fun with this; been awhile since I draw Zelos the greninja. I wanted
to draw Racheal's coworker Eddie the gallade too wondering wth is Zelos is doing. Out of all crazy things
Apollo would do, I can see Apollo asking Zelos to use the pokedex and have Apollo kiss her while he's
a hologram. xD