A little gift by TicklishWolf 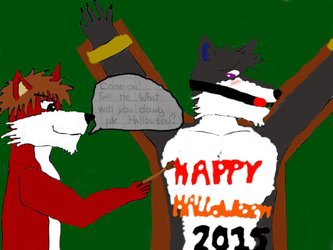 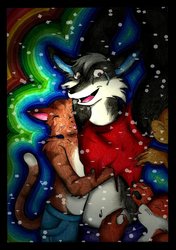 “Hey Nathan!, are you there?” A male voice called the young wolf. Nathan woke up with a big yawn, asking himself who could be calling him at that hours. It was 10:30 am, the wolf opened the door and looked at the two guys that were waiting out of the house. Treburg the lion and Ben the dragon were smiling at the wolf, who took five seconds on say something. “Oh hey guys” he said with another yawn “What's up?” he asked. Treburg and Ben looked each other with a smile “Well we have a little surprise for you, buddy” Ben said giving a step forward “So get dressed and follow us” the lion added. Nathan didn't know what was happening so he washed his face and took his clothes on. After the wolf locked his house's door he followed the dragon and the lion to a strange house. “What are we doing here?” the little wolf asked a bit confuse. The two friends didn't answered and suddenly held the young wolf, taking his clothes off and leaving him with his boxers.”What the hell are you doing guys?!” Nathan were red and feeling embarrassed “It's part of the surprise” Treburg chuckled. And after that the dragon and the lion carried him to a chair-table and locked his wrists and ankles on a X form. He struggled as hard as he could but it was useless “W-what you gonna do?!” but they didn't asnwered. The lion held the big toe of his left foot and started to scratch his claws up and down his soles. The young wolf smirked and struggled, trying to avoid his claws but it didn't help. Then Ben walked to his exposed tummy and started to run his fingers over his soft tummy, poking and scratching. “GAHAHAHAHAHAHAHAHAHAHAHAHAHAHAHAHA STOP STOP IT GUYS PLEASEHEHEHEHEHEHEHEHAHAHAHAHAHAHA” the little wolf laughed louder, squirming and wiggling his body as far as he could, but the two friends didn't stop. Then Ben leaned his head down and wiggled his dragon tongue on the little navel, making the wolf scream of laughter. While Nathan laughed and screammed on his begs, the lion used the tip of his tail to tease his toes, brushing over them and enjoying how he tried to curl his big toe. After a few minutes his cheeks turned a bit red of laughter, and a few tears came from his eyes, rolling down his blushed cheeks.

“Oooh that sweet laughter it's calling me!” “Yeah, let's hear him more close” Lando the Wolf-raccoon and Jack the wolf-jackal get on his knees close to his upper body and, with a smile, the digh all his claws into his soft armpits. Sending the young wolf into a crazy laugh “Coochy coo!” Lando teased “Tickle tickle tickle!” Jack teased as well. Nathan laughed and laughed while the saliva and tears fell on the floor and the chair-table. He kept trying to curl his toes. His feet were wet for the tickling and licking and it made them more sensitive. “Hey my turn!” another female voice talked. Dora the german shepherd pushed the green dragon softly “Please let me his belly now” she begged with an evil grin. “Alright it's all yours, I have another things to tickle...” Ben chuckled and went behind the head of the wolf. Meanwhile Dora gave him a raspberry on his tummy, making him scream and laugh while she kept blowing and squeezing his belly. Khoury and Canas were enjoying the laugh while tickling his helpless sides. Suddenly Nathan felt something on his ears. Ben took two fluffy feathers and started to drill them inside his ears. His body turned totally red and started to sweat. Screamming and howling of laughter he stopped to beg, waiting for the end. “HAPPY 100 WATCHERS NATHAAAAAN” They screammed happily with a big smile. But something was wrong. Suddenly the sweet laughther couldn't be hear. The young wolf passed out after a lot of intense tickling. “Aaaww he was so tired” Matteo talked with a smile “Yeah... Well when he wakes up we will continue” Khaj added with a grin.

And this is story for the 100 watchers. Thanks a lot guys for let me use your characters ^^. also if you like you can post this story on your profile. And I'll give the credits later, cause now im bit busy!

This is a story I wrote when I reached 100 watchers in FurrAffinity.