"I will learn all there is to know."

Thorn Brier here. I write Sci-Fi/Fantasy. I am a Creator Of Worlds. I am a Game Master/DM for various RPGs. I'm an Atheist and anti-supernaturalist. I'm a skeptic. I'm gender agnostic. I'm omnisexual and polyamorous. I am not currently seeking relationships past friendship, but friendship comes before anything else is possible. I'm in a couple significant online relationships that mean the world to me. I study Sociology at Utah Valley University. I prefer my Sci-Fi/Fantasy to be 'firm science' meaning that I still want the 'nonsense' stuff (like magic or portal tech) to be applied scientifically. See my various Technical Journals for examples of this where I lay out the scientificish underpinnings of many of my fictional science ideas.

Writing Projects:
Xamesh and its surrounding universe, which has several different intelligent species living on an artificially created world. The Galactic Commonwell colony ship Aeternia has/will crash land on Xamesh and explore these diverse peoples. I have been having several people close to me RP in this world at different points in the history to help me flesh out the world. The most current story on Xamesh is Treaty of Intenepa. Ask me Anything about Xamesh or its peoples. If you want a specific character or species to reply then state who the question is 'addressed' to.

The Black Flag is an on again off again steampunk western project I hope to make into a novel. While not focused on furry characters, there are some in the world of Tinker N Tanker, or the TnT Arc as I call it. When I write stories or make announcements for it they are on the TnTArc tumblr, along with various images I find which would fit in that world.

The Corruption Pump is a Corruption of Champions fan fic project which uses modified game content and my own twist on the world.

The Naughty Trip is a semi-autobiographical story following an eroticized version of my own youth traveling with my family for Amway meetings.

Mystic Family takes place in Aerth, a furry alt-version of Earth where the supernatural is real, but most don't believe in it. We follow a family of cubi and other supernatural beings learning about their new lives beyond what they thought were the limits of the world. (Often involves cub material.)

Role Play:
I am a Nagamew, long fury snake body below and an anthro feline upper body. I have four arms and breasts, green hair, a golden mane, white-lavender fur, dark purple stripes, and a white underbelly. See my F-List for more detail: Thorn Brier 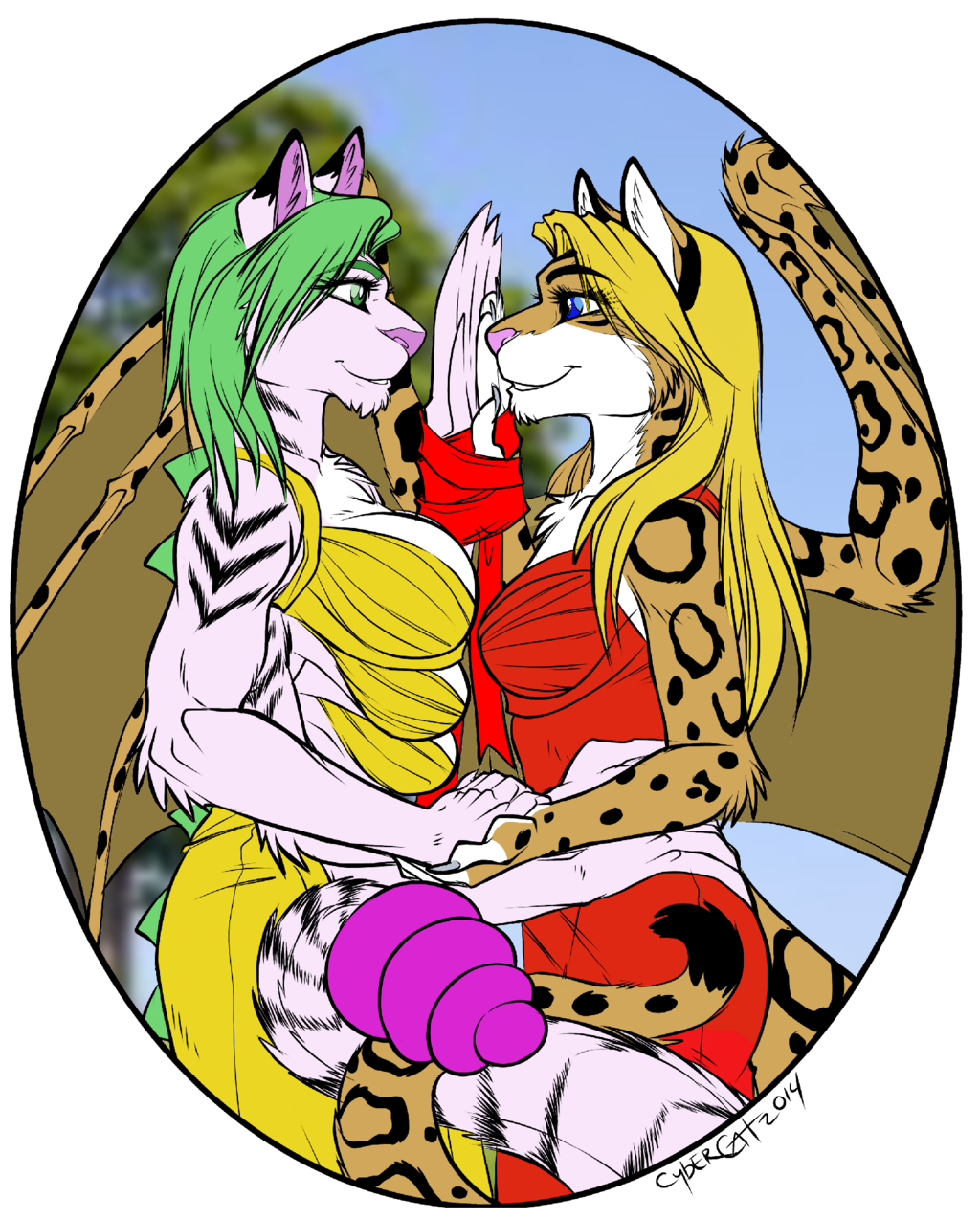 To avoid Multiple Portal Linkage from occurring due to an mental oversight I used a waveguide parameter to effectively tag all used vectors. The system will refuse to initiate a third portal on any used vector without a Chief level override, all such overrides are recorded in the devices permanent memory. In this way, almost any Multiple Portal Linkage will be on record as a deliberate act of someone in charge. It should also be noted that this system also maintains portal size ratios to default to a 1:1 so that it must be a deliberate choice to cause any objects to expand or shrink. This override, not governing an absolutely destructive scenario, can be set as the user requires. My ship systems still require a Chief level override for this function, at home I have it locked to specific people and have built in overrides set for specific beacons.

This technology has been known for a long time, but has never had much practical use outside of laboratory experiments. The device oscillates in subspace when exposed to a warp field. Over time this device will build up enough of a charge that it can release a localized warp field bubble that will last for a couple of seconds. It is also sometimes called a Warp Field Capacitor, though the name is not entirely accurate. With the development of Portals a Warp Field Burst can be used to initiate a portal in an area considerably distant from a warp core.

There are a couple materials capable of sustaining portals on or around them for some time outside of a warp field. These are extremely useful in conjunction with Warp Field Bursts.

Given that portals require one side to be generated inside of a warp field and the portals can be as far as 7 AU from each other as long as their generator is also within 7 AU of both ends, and given that portals can be moved once generated, and finally that portals have an infinitely sharp edge, I created a few varieties of beacons for my system to help manage them. I will go into further detail for some of these under usage, but they fall into a few general categories.

Portal Rings/Disks: Fixed devices capable of sustaining a portal outside of a warp field indefinitely. These can range from as small as 2 centimeters to the maximum portal size of 3.1 meters (just over 10 feet) radius. The ring or disk provides the exact contour for the portal meaning fewer waveguides are required to dictate its parameters. While the ring or disk can be taken outside of the warp field, it must be inside of one when the portal is initiated. To further reduce strain on the system, the device can be programed to instantiate the portal generated within at a specific vector or set of vectors. Obviously, these too are tied into the Frequency Exclusion System. Unlike Portal Rings, Portal Disks are designed to only be used from one side, the other side being blocked by a physical medium which may also include some form of handle or other mounting.

Vector Cuffs: Technically a specific use of Portal Disks, Vector Cuffs are created to be exceptionally durable, tied to one specific vector, and are designed to move just a little bit on the wearer to extend the feasible limits of having body parts suspended in Vector Space. As an ultimate precaution they are programed to remove themselves from a wearer when the limit approaches to prevent permanent damage.

Portal Tape: Portal Tape is an even more flexible system, but is unable to maintain a portal outside of a warp field for more than a couple of hours, furthermore, linked tapes will both have their own dimensions, so affixing them to something that will not be altering the contour rapidly is important. The system will typically detect when a set of Tape is used to create a full circle and will create the portal when the tape is removed from the roll or completes the circle, whichever happens second. Tape comes in several preset frequency setups and are color coded. Black Tape with a white line in the center is coded for two linked portals forming at the midpoint of the tape itself. Red Tape with a black edge forms its portal at the black edge and links to the next Blue Tape portal initiated. Blue Tape with a black edge functions in tandem with its Red Tape partner. White Tape with a black edge functions like Red and Blue Tape, but links with the next White Tape portal. Black Tape with two white borders does not automatically link to anything, this is sometimes called Void Tape. Any of these functions can be overridden through the system, but these are the defaults for quick use.

Location Beacons: Simply put, these beacons identify a location where a portal of some preset shape and orientation should be formed. The Beacon can be fitted with a single use warp field burst and a sustainer to allow portal formation outside of a sustained warp field. The Beacon itself is typically considerably durable and small in size as they are typically intended for use in outer space by small craft or suited workers. Such suits can also be fitted with a Recall Beacon to bring them directly back to the ship in an emergency.

Pointers/Painters: Similar to using a laser pointer to paint a target for a missile strike, a Portal Painter can be used to remotely indicate the desired location for a portal. Depending on mission protocol this can be done by simply pointing at the location, outlining the desired shape of the portal, or widening the beam to form the desired shape on the surface.

Scanning Portal: Intended for fixed locations where the user is unable to move the portal is directed to move around the user.