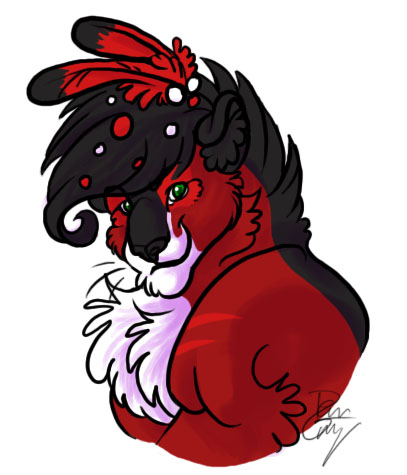 I've had two main female fursonas, and one primary male one, but lately I've been pondering creating a new one. My original, Renoayeh, was honestly the first character I ever created, back when I was in middle school. Moto'ubele is one of my primary characters from Shadows of Africa, and I had no say in her design or anything like that. But I had her roleplay story highly developed and suited to match my own personality a great deal, thus the easy adaptation to fursona. Sadaka'umiza is my God of Torture, and most precious baby - so much has gone into his design.
Yet even with all of that, I'm starting to realize that I don't feel like I have a character that actually suits me, be it in the way that I look, or in the way I act. Bele came closest to this, but as I stated before, I feel no attachment to her design. I just added the jewelry, none of her colors or markings. She just seems like a character. I think a lot of that detachment comes from her origins in a roleplay shop setting - if anything, Sada feels more important to me because everything about him was purely my own design.
I'm starting to think that maybe I need a new fursona. But it's been so long since I've created my own character that I haven't got a clue what I should do to go about it. When I was very young, I could create characters willy-nilly. Even when I had an active presence on Gaia, I could work as a colorist and hash out random designs. It's a weird existential furry thing that probably shouldn't matter, but still tugs at the back of my mind.