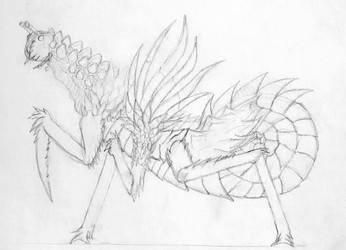 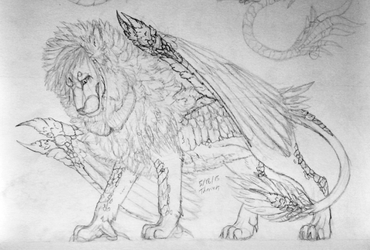 A cross bred of a Cerberus and Foo Dog! ( Also largely base off my favorite dog breed the Central Asian Shepard.)

The one closest to the viewer or on the left. (Slightly shorter ears.) Is Chù and his brother Zuihòu (Zee-ho).

Names and a little background:

I'm not great at Chinese but I thought it was cute lol. Chù means Out and Zuihòu mean Last. Sooo their name together is Out Last kind of taking on the meaning they can put up a fight. Lol Time hasn't broken them! Chu dominants this mentality. They will not give up as long as there is a will to fight back. They will endure and conquer any obstacles.

However the other way of saying their names is Last Out which takes on the meaning no ones left behind. If they were guarding someone or something precious they would try to get it to safety at all costs. Zuihòu dominants this mentality of protection. If a hostile situation occurred they would literally be the last one out of the battle field.

Long lions mane but curly bits thrown in while also having straight hair. Makes a interesting mess really. Ears are cropped, Chu has shorter ears and less fluffy. Zuihòu has croppered ears but slightly more ear and more fluffy then his brother's. Tail is a massive fluff and so is normally tied at the base so it is not in the way.

Without his equipment he has scales over his back slightly touch the top of his arm and back leg. His belly is scaleless. With equipment he has a lower chest plate and a sword holster. Under their thick manes they they have hidden dog collars. (Can be chains, even rope, orbs, and that thing that tibetain mastiffs wear.)

They always carry there orb around or hide it in special places. They've had it since they were puppies and quite often play with it (fight over it.)

I debated over this a bit. I feel they have individual minds but on some level share a brain. Though more on a subconscious level. Each head controls the limbs on it's side of the body. So Chu being left will control the left arm and leg. Though on a subconscious level when walking, they think forward but all 4 legs move unless the other head is using those limbs or thinking about it's limbs of control. It gets complicated when they start focusing on their legs or trying to be careful footed. Though they know the drill of how to step properly.

(Foods a good mind wiper when they get tangled by their limbs. XD Wave a steak in front them and they'll walk and beg in unison once more.)

I picture raising them as puppies XD. Had to learn that you have to split all of their food in half or they tens to fight over a single bowl. Same belly but each one loves to eat. Though Chu being a bit more dominant tends to scarf down some of Zuihòu's before he realizes it.

For some reason when they are bored they start to fight over there orb. One head will use it's paw and head to try and keep it away from the other. Leading to a lot of nips and rough play.