Model Kit Coyote by The Pink Rose Of Texas 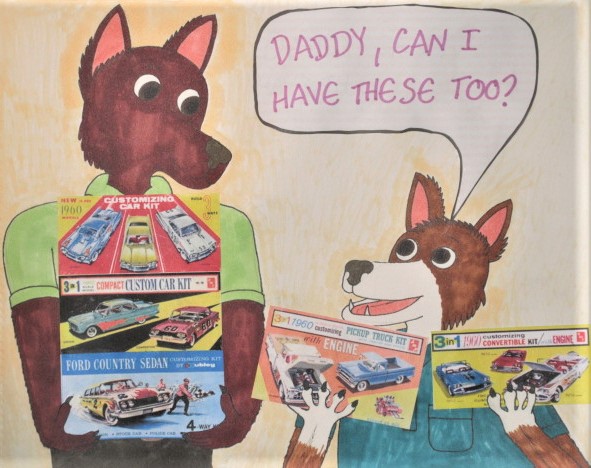 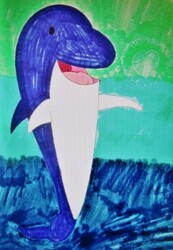 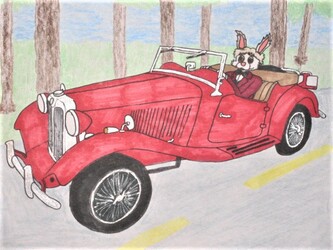 Ever since Clarence Coyote's accidental time trip to 1960, he's been experiencing the simple and exciting pleasures of that bygone year: black-and-white television, shopping in actual stores, drive-in movies and restaurants, big and stylish-looking cars with V8 engines, etc. And now his adopted father Al thinkd an 8-year-old cub like Clarence is old and mature enough to try anothe simple pleasure: model car building. So it's off to the hobby shop at the Tri-Star Plaza in Albuquerque, NM to pick out some starter kits for the eager young cub. The store's owner suggests these "curbside" kits, just released:

Clarence, however, thinks he's also ready for these kits as well:

"Hold on a minute, son", cautions the owner. "Those kits have a lot more parts in them, including the engine...and that Chevy truck has a trailer and tow hitch."
"He's right, Clarence", agrees Al. "You might want to practice your skills on the simple kits before moving on to those more advanced ones." He then leans closer to Clarence and whispers: "Besides, even if you were still in 2018, you'd be too busy with your computer thing to try building them."
"I guess you're right", sighs Clarence as he puts the two kits back on the shelf.
As the owner gives the coyote father and son some bottles of paint and tubes of glue, he suggests: "Maybe you could have your two older cubs help Clarence build the models...you know, make it a joint project, like those Detroit auto assembly lines."
"Well, we'd have to agree on the color scheme and which way to build them", says Al, "but I guess it could work."
"In that case", says the owner as he paws Clarence back the two advanced kits, "you can go ahead and have these as well."
After ringing up the total on the old NCR cash register *chchchcing chchchcing* the owner makes a final suggestion: "Be sure to lay some newspaper on the table so you don't make a mess...and don't get any glue or paint on your fur or you'll never get it out."
"Will do", answers Al as he and Clarence leave the store.

The model car boxes are images taken from the Model Roundup website, the characters belong to moyomongoose, and the art was done by me.
The kits listed above are the "model year" kits from 1960, the time his story takes place. (You can read the story on his Inkbunny acount.) Unfortunately, I couldn't find any Chrysler/Plymouth/Dodge kits, and the Coyote family are loyal Chrysler owners.
(That sounds like my family, except they were loyal Ford owners.)
Anyway, hope you like it!