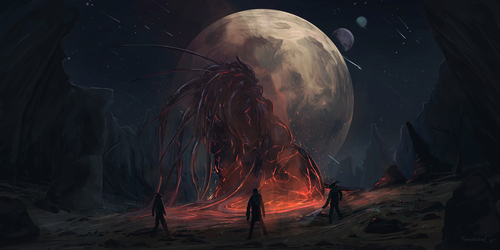 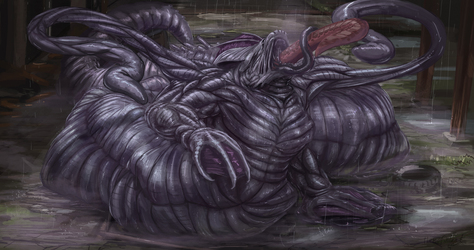 When food sources become depleted dragons tend to become more opportunistic and search for food in areas they wouldn't otherwise go to. This opportunism however can make them reckless in some situations, something which the amalgamate will gladly abuse.

"While flying in the sky in search for food the dragon spotted an old trainyard. A few months back a lot food was being moved via trains so it was possible some of it was left behind. This area seemed safe enough to land as well, having none of the amalgamate in sight. Dust and debris kicked up in the trainyard as the dragon landed in the weathered trainyard and began its search. From a first glance it would seem there is nothing special here, but the dragon was determined to at least have a look. Several of the corners of the yard were shrouded in darkness however and the dragon decided to steer clear of those areas to be safe. In the dark corners however something was moving, something that had sensed this dragons arrival. As the dragon searched and searched he became more reckless, ignoring his own rules of staying away from the shadows. Then suddenly two tentacles launched out from the shadows! One of them promptly wrapping itself around the dragons wing and the other around its hind leg. The thing tugged at the tentacles causing the dragon to lose balance. Then it emerged from the darkness. A large amalgamate naga, far bigger than the dragon itself. The naga did not give the dragon a chance to get up before it already began coiling its serpentine body around it, Its cobra like hood flaring up once it had sufficiently coiled around the helpless dragon. Then, suddenly the naga forced its webbed claw over the dragons snout, wrapping it around, creating an air tight seal around it, before it began forcing the dragon to inhale its spores. The naga let out a guttural roar as the dragons willpower to struggle gradually faded the more spores it inhaled."