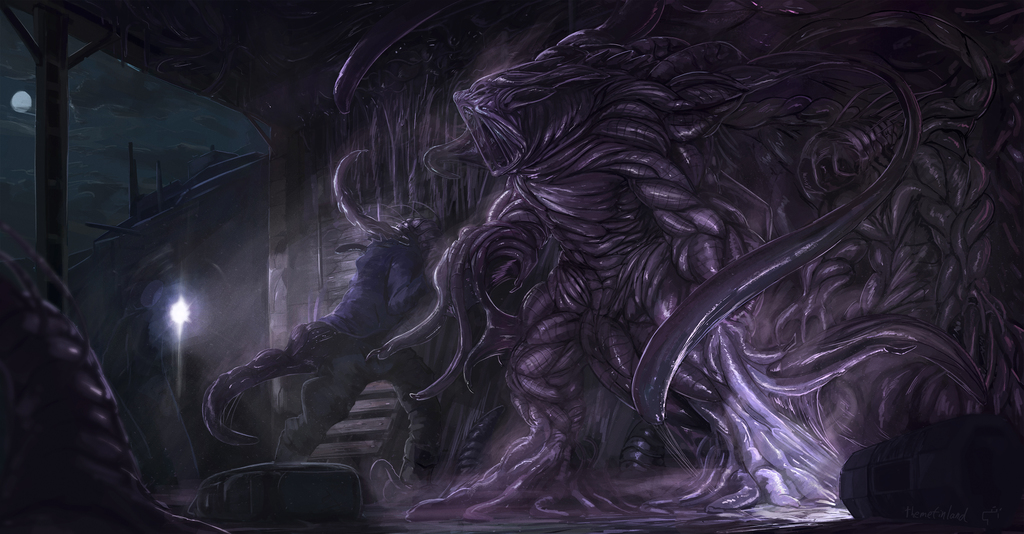 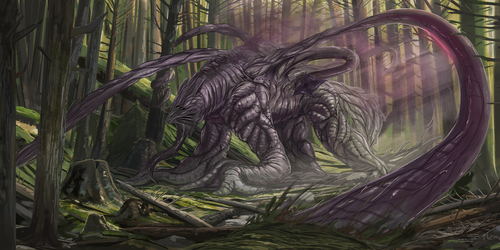 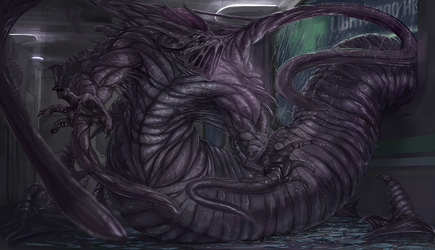 Decided to finish this one up after it having been sitting half finished in my WIP folder.

"Outside of the safe zones lie many barren and desolate areas that have been deemed unsafe for the general public. However, as these safe zones are usually very well set up and defended so the amalgamate rarely gets close. Many people end up speculating that the threat is not as big as the government makes it seem. Due to this and the constantly fluctuating prices for food and other necessities, some people end up sneaking outside, never to be seen again.

Indeed, as one of these escapees was driving along a road bordering an industrial area several dozen miles away from the nearest safe zone they spot a car parked next to the road, the lights still on, but nobody in sight. He gets out of the car and straps their respiratory protection mask on before inspecting the car closer. As he shines his flashlight onto the car he recognizes the register plate, it was one of his neighbors. He circles around the car to look inside, there is indeed nobody in here, but the owners cannot be too far as the battery on the car has not run out yet.

Judging by the two sets of footprints going away from the car he realizes that the owners of the car must have went into the factory situated right next to the road, possibly to look for things that they could sell or something else. The other grouping of footprints seemed to go into and alleyway next to the factory. He slowly pushes the front door ajar as he enters the dusty old factory. The air was clear inside and the dust that had settled on the ground made it obvious where the owners of the car had walked to. He shouted out into one of the corridors of the dark factory and waited for a response, but none came. Not content on going to explore old factories, which quite honestly, made him nervous with their several blind corners and long hallways and the feeling of being constantly watched. He could almost swear he could have seen something move at the end of one of the dark hallways before he hurriedly left the building. He went back to the car and grabbed a baseball bat from the trunk, it may not be the most effective tool of disposal, but it should take care of anything hostile that comes his way, or at the very least give him some comfort by having a solid weapon in hand. Pausing for a moment he decided that he would immediately run if he noticed something wrong. He left his car running with the lights off as he went back to follow the other set of footprints that lead to the alley.

Nothing seemed really out of place here and it made him wonder just where the owners of the car were. However soon he could hear strange sounds coming around a corner behind which he could see a bit of light shining into the alleyway. As he got closer the sounds became more organic, as if something wet and fleshy was being squished together. He turned the corner and froze in place for a moment.

Right before him he could see 2 of the amalgamate creatures and one person who seemed to be struggling against something. After a quick glance however he could see that something had attached itself to their head. He could also see few of these smaller things that had attached itself to the persons head scuttling along the ground. His attention was quickly drawn into one of the larger amalgamate monsters as it twisted its head towards him and let out a deep and distorted roar. It seemed to be hopeless to help the other person either as just when he was about to turn and run some sort of tentacle like formation burst through their jacket. His body finally unfroze itself and allowed him to run, his heart beating so hard he could swear it was about to burst out of his chest as the sprinted past the dilapidated dumpsters and alleyways. He stumbled a bit as his foot hit the grass on the front side of the factory right before his car. He got up without skipping a beat and went to open his cars door and looked back for a split second. One of those smaller amalgamate creatures had followed right behind him and as it leaped at him he managed to just in time to bring up his bat to block it, the thing wrapping itself onto the bat which he almost instinctively threw aside him, swiftly jumping into his car. After getting onto the drivers seat he could see from the corner of his eye one or more of the amalgamate emerge from the alleyway before hitting the gas and swerving out of there.

His heart sank at the realization that he may have made a grave mistake leaving the confines of the safe zone."