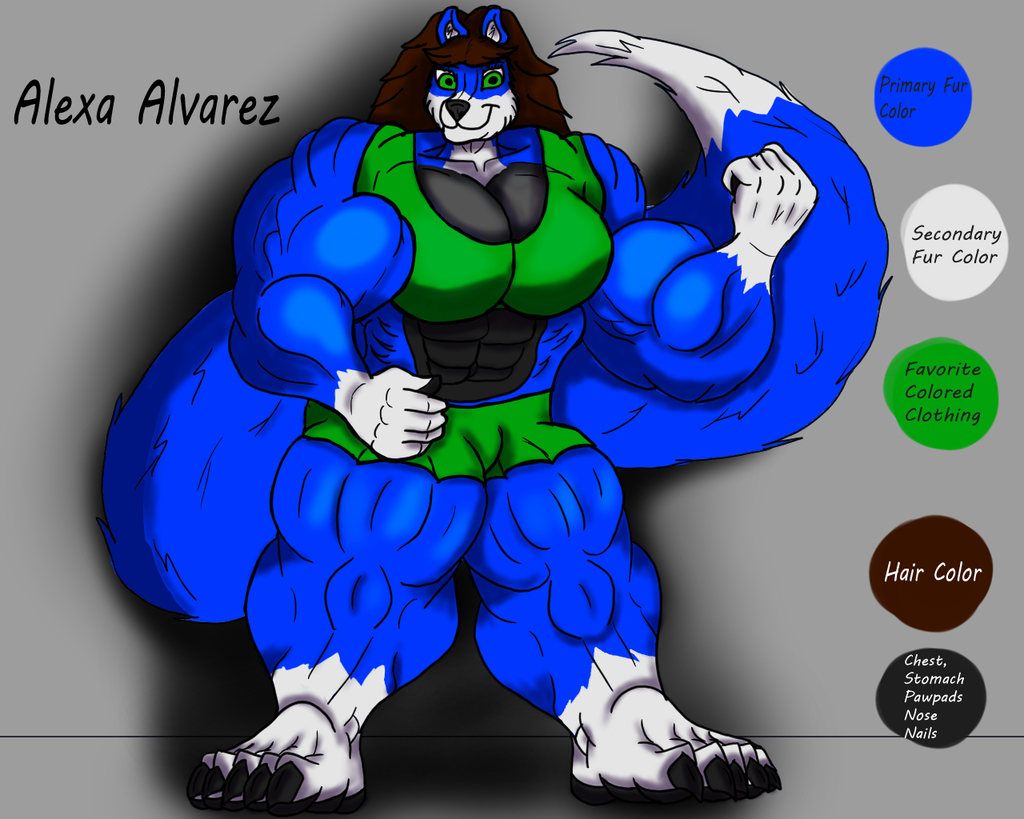 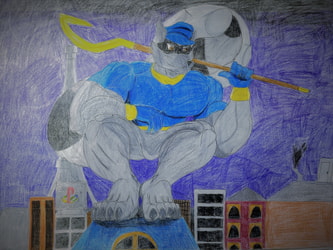 Name: Alexa Alvarez, aka, Crimson Azul the 2nd
Occupation: Superhero
Species: Blue Pyro-canine
Ethnicity: Mexican
Age: 20s
Personality:
-Assertive in a fight
-quiet in a peaceful public place
-outgoing
-silly
-compassionate
-strong
-doesn't take shit
-Sassy
-Tries in many situations to be wiseful
Likes:
-growing big
-helping people
-sushi
-Parkour
-Her mom Sofia
Dislikes:
-Creeps
-Abusive people
-Stress
Being overwhelmed
Powers:
-Super Strength
-Super Durability
-Super Endurance
-Light Pyromancy (able to control fire and bend it to her will though with minimal use. Fire appears blue in her case)
-Pyrofusion (able to absorb fire and store it within; can increase muscle mass)
She is able to absorb anything that is hot. It includes but not limited to
-Fire
-Magma
-Burning objects (cigarettes, etc)
-Hot Pavement (i.e. asphalt, concrete)
she can sometimes control what body parts she can grow primarily, as opposed to just her whole body, although she still doesn’t have pure control over that yet. Sometimes it can happen randomly
warm/humid air (New Orleans, Cancun, etc.)
certain sources can have a bigger effect than other sources (magma can make her grow more than fire, and fire can make her grow more than cigarettes)
-Amature self defense skills (karate, taekwondo, etc) still in the process of learning

Bio: Alexa was born from both her father Alex (AKA Crimson Azul the 1st), and her mother Sofia Kruger. She always looked up to her dad as her hero, and it certainly helped that he was already one in public. His acts of courage and chivalry imprinted unto her growing up, and she never forgot how an image of a superhero could have such a positive change to her life. After her dad passed however, Alexa, as well as the people within the city, started losing that feeling overtime, with the people feeling not only less safe, but also less morale. It never was the same without him, and Alexa herself was losing her spark. However, as she was spontaneously developing her own powers over her years of maturing, Alexa saw this as an opportunity to not only carry on his image, but create her own image as well. To fill a void that was left blank a long time ago. Now taking her father’s steps and with the help of her mom, she sets out to take over the mantle of superhero, and ergo, takes the pen used for stories of epic proportions and writes herself into the pages of legends!

Welp, I finally did it! My redesign!!! feel very happy with how it ultimately looks, and on top of me using Clip Studio Paint to complete it that makes me feel VERY happy! Really the reason why I decided to redesign her is because I wasn't happy that I had a fursona that was tied to a corporation. Personally if I'm going to have a fursona I'd rather have it be an animal that I created and isn't own by Nintendo. no offense to Nintendo, but that's just how I feel. Nothing much else to say other than finally! After much procrastination too! and Thank you all too for your support and sticking around!