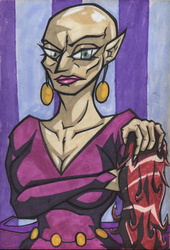 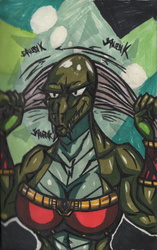 A random doodle I through together of that cute elf lady Aerie from video game Baldur's Gate II, albeit with all of her hair gone.

Originally her reaction in this doodle was going to be one of distraught due to the loss of her hair as she feels around on, and pats that head of her's only to find out that, aww sh*t it's for real! But instead I accidentally made her look like she was smiling when I was inking this as though she was happy with the drastic change in her hair do, even though I'm pretty sure this character would probably not be actually okay that, if she were to actually wind up bald hypothetically, and considering her reaction to going bald in this image is probably the polar opposite to how she would actually react in universe, then consider this fanart doodle piece, thingy, to be very cursed AF, even more so in the upcoming coloured version! :XD: Well unless she actually winds not minding, or getting use to it anyway, I'm not bioware or wizards of the cost, IDK! But I digress. Either way, I just winded up rolling with that in this doodle anyway, it was all for sh*t's and giggles, I felt like drawing Aerie in some way, and I am definitely going to draw her again another day! X3

I gotta colour this doodle next time.