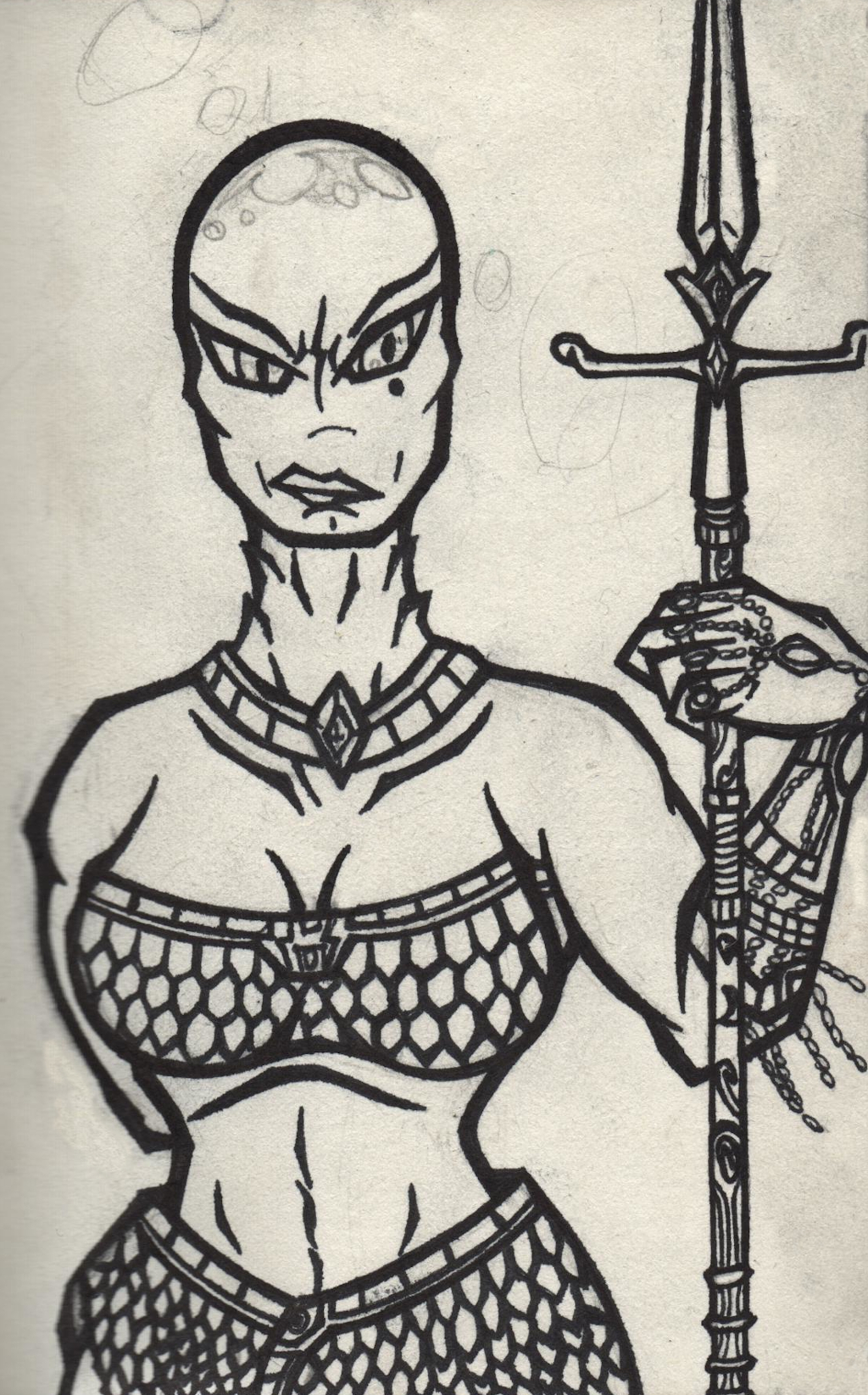 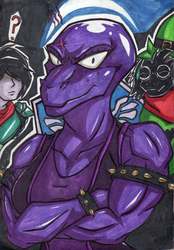 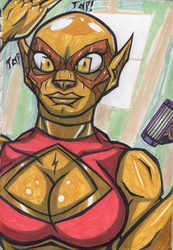 Well hello there! Haven't posted anything in a while haven't I? Let's just say, hadn't I knew, that you only needed to apply as much pressure to those micropens as the actual weight of the pen itself, I would've gotten a lot more stuff done a long time ago! Bloody hell! All of those art blocks, was because of me applying to much pressure to those bloody micropens causing them to stop working! Well, I know better now.

After solving that major blunder, and getting a lot of line art done for my upcoming submissions. I decided to take a break from all of that, and take this little detour over hear. It was originally going to be just a simple doodle of queen finny from the classic spyro games, but I decided to make it an entirely separate albeit proof of concept character instead. Introducing the creatively named ms. Finny, even though she has no fins and her name is really just place holder. In fact she is suppose to a member of the same alien monster race as a much older character of mines, King Finny https://www.furaffinity.net/view/22838788/ Who was originally a genderswapped male version of Queen finny from Spyro 2. I am probably going to redraw King Finny one of these days and update his design, after I have finished all of my other stuff first, and no King Finny and Ms. Finny are not relatives, again her name is just pure placeholder.

When I was drawing this, I was debating in my mind whether or not I wan't to give her pointy elf like ears similar to King Finny to keep the morphology of her race a little more consistant looking, or just straight up omit the ears to in place of external earholes instead to make her and the female members of species more monstrous and intimidating looking, which the female members of this species is suppose to look anyway! That's right folks, the male members of King and Ms. Finnies race are suppose to be the more elaborate and elegant gender, the so called fairer sex compared to the females which are montrous looking by comparison, just look at the king finny picture compared to this here. And yes that is %100 OKAY, it's 2020 people, we can do what we please! Besides in other none human species with noticeable sexual dimorphism, it's usually the male who has the flashier or more elaborate features, or is just more interesting looking altogether compared to their female conterparts in some way, shape, or form respectively. The male is suppose to the fancy pants one, not the woman, no no no silly humans! The females are always suppose to be the more basic or simple looking ones compared to their male counterparts, they don't have to do things you're arbitrarily arse backwards way(karrens).

Albeit in King and Ms. Finnies race, the men still look like flashy and flamboyant Jojo esque chaddy looking sexy muscle men, where as the women, even if they aren't as elegant or elaborate as the men, but still look kind of sexy anyway, it's just that the females once again are the more plane and simple looking ones while still looking more intimidating, even if the men look like they can bicep curl a 45 Kilo barbell or something like that. The women of this race are just suppose look even more like monsters than their male counterparts do. The women's beauty are more on the unconventional side. This was a concept I had for this race a long time ago since adolescences when I first made them. I based the Idea for their sexual dimorphism, not just off the way many other non human species handle it on earth, but also on some of the media I use to watch where they would have some exotic race of beings where the men were monstrous looking, and the women were more beautiful, oftenly conventionally so, so I was like nah F**k that bollocks I'm gonna do it a different way, so I flipped that, and made it somewhat the opposite with this race here, which in a way kind of does have a humorous side to it! XD

Man when drawing this, I wasn't exactly sure well my textiles would turn out, let alone drawing more elaborate jewellery, but surprisingly, it turned out waaaay better than I was expecting. I was able to draw her scale maille bra thing and skirt thing pretty well, even managed to make gauntlet look very nice. I'm still going to practice my textiles and jewellery drawings more so I could make more elaborate looking stuff. I also like how her partisan turned out, I tried to keep it more realistically proportioned, with a narrower and longer head to make it a more vicious looking thrusting weapon, even made the shaft look a lot more elegant as well. Her partisan is suppose function as a hybrid magic staff and traditional pole-arm, that way if you run out of magic power for the day and can't power the device, that's okay, because you still have a highly effective thrusting weapon, especially with a strongly tapered and long point like that.

I'll probably give some more insight on her races biology at some point because I already kind of want to end the artist comment and post this thing already. but I will give a few spoilers, yes her race do have amphibious trates, which mean no her race are not cetacean's just because they have breast, a dead give away being that her race don't have to resurface from the water to breath like cetacean's do, and they have gills, cetaceans don't. Yes Ms. Finnies race can thrive both on dry land and in water just fine.

They may look visually similar to fish (which the taxonomy of is very complicated since they are a polyphyletic group of animals meaning that they don't at all share an immediate common ancestor even though they are group together with one another anyway), but her race are actually suppose to be a member of a much greater encompassing and completely distinct lineage that evolved independently on their home planet that are indeed somewhat analogous to tetra-pods on earth but still completely different at the same time, and would probably be considered to be a very weird clade, or order, group whatever compared to anything on earth if they were real.

Oh yeah and they didn't evolved from anything analogous to amniotes at all since none of their ancestor's evolved amniotic eggs, which are water proof eggs do to having a hard shell. Also her race gives live birth via Ovoviviparity, making them not require a near by water source to keep their eggs hydrated, since they would just hatch in the womb, which also allows them to give live birth without the need for a uterus or placenta! :-) and yes the breast of the females are fully functional and secrete a milk like substance which has a similar consistency to elmur's crafting glue or condense milk, through which they secrete from their bust and not deploy through nipples, because they don't have nipples, they do the "milk" sweat thing similar to Monotremes(which don't have nipples either even though they are mammals).

Yes Ms. Finnies races breast had evolved completely independent from the mammalian lineage altogether thanks to convergent evolution, which is when similar traits evolve multiple times independently from completely unrelated lineages. A part of evolution that is very common in our real world. Which means that technically the "mammaries" in breast and the "milk" they produce from a taxonomic standpoint would not be considered to be true milk like that of mammals or mammaries. They would actually be considered to be analogous traits and not homologous ones, basically just functionally similar structures and secretions, not the real deal at all. because again of evolving independent of the actual mammalian lineage. And no the milk like secretion this alien race makes is not mucous like, like that of a dicus fish at all... It's actually ultra-filtered blood similar to mammal milk(eww!) albeit it has sort of a sage or teal colour unlike mammal milk. Don't ask why. hopefully that quenches the inevitable why the not-mammal boobs questions, might as well somewhat answer it, even I rather not have to worry about, but then again folks aren't going to like the because fantasy answer so might as well go through the extra hassle. More stuff about her race will get disclosed way later.

Oh yeah as of this picture Ms. finny is a middle aged woman equivalent to the same level of biological maturity as a human female within their mid to late 50's, which for all we know could mean that's she's 100's of earth years old give or take. She's also bald because of succoming to female pattern baldness which effect 1 out 2 females of her race, which are also the only ones that go bald naturally, basically she succumbed to her genes and she had to except it, so she started shaving her head, and she probably can't grow hair anymore do to her age at this point, and no she did not cared when she did started shaving her head, women of her race don't were their hair long anyway, men do! When she was young she use to have a slick back undercut style with the back part being spiked. I'll probably draw a younger version of her next time after I design a fully clothed version of middle aged Ms. Finny.

I hope you all enjoy the doodle!